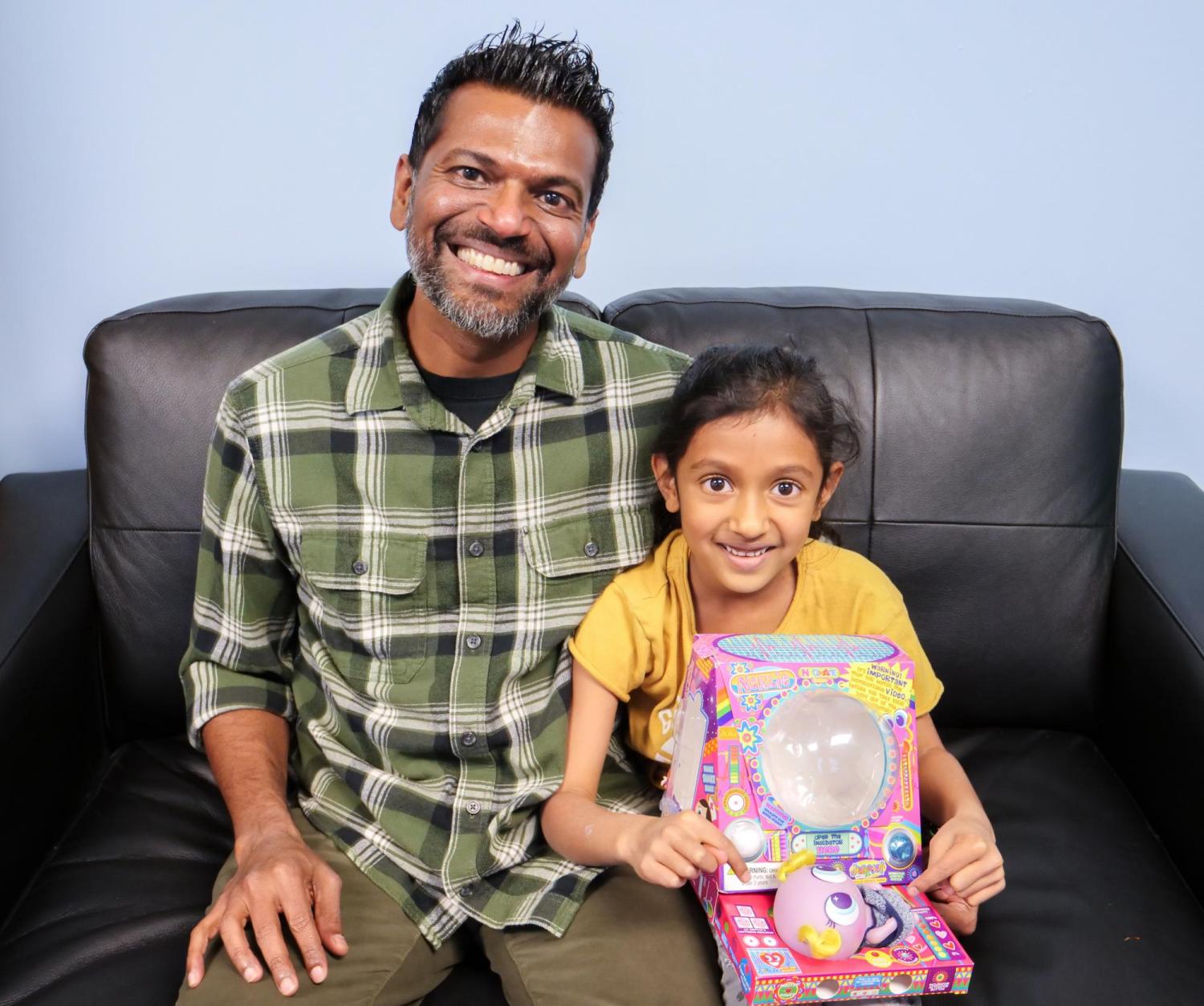 Harsha Gangadharbatla and his daughter Aryahi sit with the toy she discovered through an "unboxing video" online. Credit: Kimberly Coffin/CU Boulder

’Tis the season for tantrums in the toy aisles and impossibly long Santa lists. But for parents wishing to shield their children from the clutches of consumerism, shutting off the TV commercials and avoiding the malls may no longer suffice.

According to new CU Boulder research, the “unboxing videos” children are watching on their smartphones or tablets today may be parents’ new nemesis.

“We found that about 78% of children are watching these videos, and the more they watch them, the more likely they are to place purchase demands on their parents,” said Harsha Gangadharbatla, an associate professor of Advertising, Public Relations and Media Design. “We also found that when their parents say ‘no,’ they are more likely to throw a tantrum.”

Fourteen years after tech geeks first began uploading videos of themselves opening sleek new cell phones and other gadgets online, so-called unboxing videos have become some of the most popular content on the internet, with viewers tuning in for nearly 6 billion hours each month.

They’re particularly popular on YouTube Kids, where social media influencers (often kids themselves) unpack boxes of shiny toys, reviewing them for young onlookers whose parents are often unaware such videos even exist.

We’re concerned that the unboxing phenomenon could be grooming an entire generation of children to get addicted to highly consumeristic purchasing behavior from a very young age."

Little do those young viewers know, the influencers are often incentivized via free products or cash to make the videos. For instance Ryan, a 7-year-old who launched his Toys Review “for kids by a kid” in 2015, now has more than 18 million subscribers and has reportedly earned more than $22 million dollars via unboxing videos.

That all concerns Gangadharbatla, who sees the videos as a “blurring of the lines” between entertainment and commercial content that could potentially have harmful effects on kids.

“There is very little regulation when it comes to these videos and what regulation there is often goes unenforced,” he said.

He and his wife Deepti Khedekar, a doctoral student in the Department of Communication, set out to study the unboxing phenomenon a year ago, after their then-5-year-old daughter Aryahi placed an obscure toy – a premature baby doll complete with incubator – on her Santa list.

When they asked where she heard about it, she said she saw another child “unbox it.” Despite its plastic and cardboard components, it cost nearly $60.

“By creating this artificially high demand through unboxing, companies are able to jack up the prices,” he said.

The husband and wife research team set out to learn more, surveying 421 parents of youth ages 4 to 10 about their children’s exposure to unboxing videos and their own understanding of them.

According to the preliminary results, presented at the Association for Educators in Journalism and Mass Communication (AEJMC) meeting earlier this year, 80% of parents report their children spend more than three hours per week watching videos in general on devices, with 11% watching more than 15 hours per week.

The study also found that when parents knew more about the motives behind the videos, and persuasive power they have, their children watched fewer of them.

The researchers noted that because their brains are not fully developed, children have a different sense of time than adults do, making them more vulnerable to persuasive advertising messages.

“For kids, time is right now. They’re not thinking about the consequences of their behavior five years down the line,” Gangadharbatla said.

Children also tend to model what they see on screen, so repeat exposure to kids exhibiting consumerism online could potentially have broader consequences, the researchers noted.

“We’re concerned that the unboxing phenomenon could be grooming an entire generation of children to get addicted to highly consumeristic purchasing behavior from a very young age,”  Gangadharbatla said.

Some progress toward better regulating unboxing videos has already been made.

After the nonprofit truthinadvertising.org filed a complaint with the Federal Trade Commission alleging that Ryan Toys Review “deceptively promotes a multitude of products to millions of preschool-aged children in violation of FTC law,” the FTC released new guidance spelling out how online influencers must disclose sponsorships to followers.

But in an age when children are often more tech-savvy than their parents and guidelines exceedingly hard to enforce online, Ganghadarbatla said media literacy among parents is the best line of defense. He advises them to limit screen time within reason but also tune in with their kids sometimes and use the videos as teachable moments.

“Back in the day, parents knew what their kids were watching on TV and could set parental controls, but in this wild wild west of the internet, things are different,” he said. “In the absence of strictly enforced regulations and disclosures from influencers online, it falls on parents more than ever to talk with their children about what they’re watching.”

Researchers from CU Anschutz and CU Boulder are developing an artificial intelligence tool to diagnose dementia at earlier stages in an effort to curb its progress and plan more effective treatment options. END_OF_DOCUMENT_TOKEN_TO_BE_REPLACED

CU Boulder has received a major grant to research recovery from the Marshall Fire to help communities rebuild from future disasters. END_OF_DOCUMENT_TOKEN_TO_BE_REPLACED
Return to the top of the page