Schools of molecular ‘fish’ could one day improve display screens

Schools of molecular ‘fish’ could one day improve display screens

Take a dive into what may be the world’s smallest coral reef. Scientists at CU Boulder are using a type of material called liquid crystals to create incredibly small, swirling schools of “fish,” according to a study published recently in the journal Nature Communications.

The fish in this case aren’t actually aquatic animals. They’re minute disruptions in the orientations of the molecules that make up solutions of liquid crystals, said Hayley Sohn, lead author of the new study.

But under the microscope, these molecular deformations—10 of which could fill the width of a human hair—certainly look alive. These pseudo-particles can twirl together as a group, shift their motion on a dime and even flow around obstacles when exposed to different electric currents.

“By tuning that voltage, I can have them move in different directions and make them form a nice cluster where they’re all stuck together. They can branch out into a chain and then come back together,” said Sohn, a graduate student in the Materials Science and Engineering Program at CU Boulder. “It’s very fun to play with.”

The team hopes that its tiny reefs could one day become part of new smartphone screens or even video games.

Study co-author Ivan Smalyukh, a professor in the Department of Physics, explained that liquid crystals are a major component of modern display technologies, from computer tablets to high-definition TVs.

“Our work is very compatible with this multi-billion dollar display industry,” Smalyukh said. “It could add to the new spectrum of ways that humans and computers interface.”

His group’s discovery, however, came about almost by accident.

Sohn had been experimenting with new ways to create large groups of those deformations within liquid crystal solutions, a phenomenon that physicists call “solitons.”

The team’s liquid crystal solutions, she said, are made up of quintillions of rod-shaped molecules—think of them like the crowds in CU Boulder’s Folsom Field, which she can see from the window of her office. Normally, those football fans don’t get in each other’s way, but if you prepare a liquid crystal solution in a precise manner, they will start to squeeze together.

“We can create conditions that make the liquid crystal frustrated,” Smalyukh said.

To offset that frustration, small pockets will form in the liquid crystal solution in which the molecules inside bend and twist in unusual ways. These solitons don’t actually move in the traditional sense. Instead, their deformed structure passes throughout the solution, a bit like another common occurrence at sports arenas.

“It’s like if you’re at the stadium, and the crowd is doing the wave,” Sohn said. “The wave only moves because the people are changing how they point their arms.”

One day in the lab, Sohn prepared a microscope slide with a group of several solitons, then took a break. When she came back, her creations were no longer on the view screen.

“I thought, ‘Oh, no. I have to do this experiment all over again,’” Sohn said. “Then I looked at the video playback and saw this schooling behavior. I was just amazed. It wasn’t a failure.” 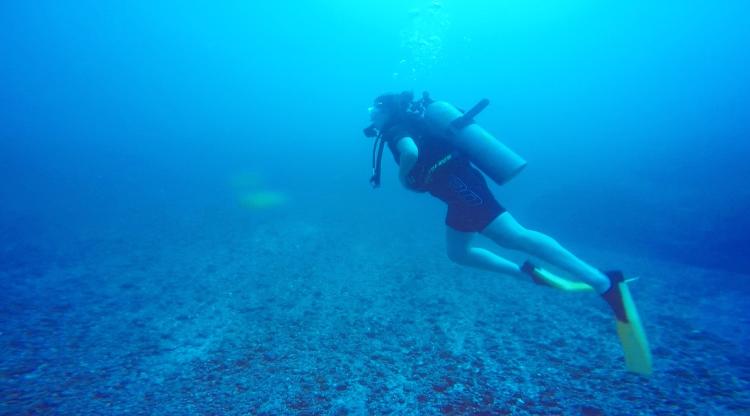 And, Sohn added, the solitons didn’t move like inanimate objects. She explained that, under the right conditions, these molecular fish can interact with each other. That means that they can bump into each other and influence each other’s trajectories, creating patterns that are almost impossible to foresee ahead of time—hence the comparison to thousands of fish linking up their motions.

It's an area of research that, Sohn said, fits with her own hobbies.

“One of the best parts of this research, for me, is that I can draw inspiration from and make connections to nature, such as the schools of fish I’ve seen SCUBA diving,” she said. “Next time I go diving, I’ll just call it research.”

Smalyukh, in particular, is excited about how unpredictable the schools of solitons can be. He said that such behavior could lead to different kind of interactive display technology, one in which the images that you see on a screen aren’t necessarily pre-programmed but appear and shift according to the emergent motions of the soliton schools.

“Imagine a new type of computer game where you cannot predict what will happen next after you push on the screen,” Smalyukh said. “It wouldn’t be programmed but shaped by emergent phenomena.”

The Living Materials Laboratory is scaling up the manufacture of carbon-neutral cement as well as cement products, which can slowly pull carbon dioxide out of the atmosphere and store it. END_OF_DOCUMENT_TOKEN_TO_BE_REPLACED

Qubits, the basic building blocks of quantum computers, are as fragile as snowflakes. Now, researchers have come up with a new way of reading out the information from certain kinds of qubits with a light touch, potentially paving the way for a quantum internet. END_OF_DOCUMENT_TOKEN_TO_BE_REPLACED

New results from real-world tests of a downwind turbine could inform and improve the wind energy industry in a world with intensifying hurricanes and a greater demand for renewable energy. END_OF_DOCUMENT_TOKEN_TO_BE_REPLACED
Return to the top of the page