The study, which was recently published in the journal Ecological Applications, examined burn-affected ponderosa pine and Douglas-fir stands in southern Colorado and northern New Mexico to better understand variation in forest responses. The researchers measured post-burn seedling (i.e. juvenile trees that established following fires) densities after fires dating from 1988-2010 and found that 42% of ponderosa pine sites and 69% of Douglas-fir sites fell below the lowest reported historical tree densities in those areas.

The findings suggest that some burned areas are more vulnerable to forest loss than others. An absence of viable coniferous seeds, particularly near the interior of severe burn zones, can drastically hamper a forest’s ability to recover to its prior state. In addition, warm and dry conditions, such as those found at low elevations and on south-facing slopes, impede new tree seedling establishment.

“Seed availability is an important and underrated element of forest health and resilience,” said Kyle Rodman, lead author of the study and a former doctoral student in CU Boulder’s Department of Geography. “These areas can only come back after a fire when live trees can disperse seed into the area that’s been burned, and most trees do not produce seed every year.”

Still, Rodman says, the variability of post-fire seed production is only now coming into focus for researchers.

“Getting that kind of data is time consuming and requires a lot of different information,” he said.

The researchers selected 15 recent wildfires that occurred in coniferous forest sites in southern Colorado and northern New Mexico. They conducted field surveys to measure seedling densities as well as evidence of recent seed cone production from the scars left on tree branches, then cross-referenced the seedling density data with numerous other datasets including climate records and distance to potential cone-producing seed trees.

The scientists also used a novel method of cutting and dating tree seedlings to determine the year of establishment, allowing for a more accurate assessment of the climatic conditions that are beneficial to post-fire forest recovery.

While the results varied by site, the study generally found that both ponderosa pine and Douglas-fir forests struggled to recover, with large percentages falling below their historical averages. Warm, dry forest sites with southern exposure were especially vulnerable.

“A significant percentage of the burned area hasn’t recovered to even low densities, especially in these warmer areas,” Rodman said.

The findings suggest that spatial proximity to surviving trees (and thus, greater seed availability) acts as a kind of first filter for forest recovery, with unfavorable climate variables acting as a second chokepoint.

“These results reinforce findings from many similar recent studies across the western U.S. showing that in dry forests such as ponderosa pine stands following recent severe fires, tree regeneration is being limited both by reduced availability of seed due to fewer surviving trees and by warmer-drier climatic conditions unfavorable for tree seedling establishment,” said Distinguished Professor of Geography Thomas Veblen, a co-author of the study. “These low elevation dry forests occurring near the edge of their climatic tolerance appear to be prone to conversion to non-forest vegetation types following wildfires.”

The research also suggests that in order to maximize the chances of forest regeneration, land managers in the western U.S. should concentrate reforestation efforts in cool, wet areas where seedlings are most likely to thrive after a fire.

The researchers plan to continue honing their models to incorporate future climate projections in order to evaluate a range of possible outcomes for forests under continued climate warming and increases in wildfire activity.

Alaska is getting wetter; that’s bad news for permafrost and the climate

Alaska is getting wetter. A new study spells out what that means for the permafrost that underlies about 85 percent of the state, and the consequences for Earth’s global climate. END_OF_DOCUMENT_TOKEN_TO_BE_REPLACED 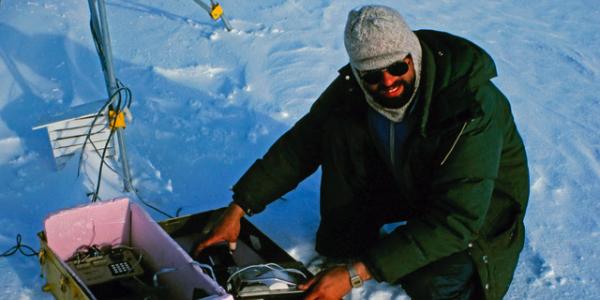 The St. Patrick Bay ice caps on the Hazen Plateau of northeastern Ellesmere Island in Nunavut, Canada, have completely disappeared, according to NASA satellite imagery. END_OF_DOCUMENT_TOKEN_TO_BE_REPLACED
Return to the top of the page