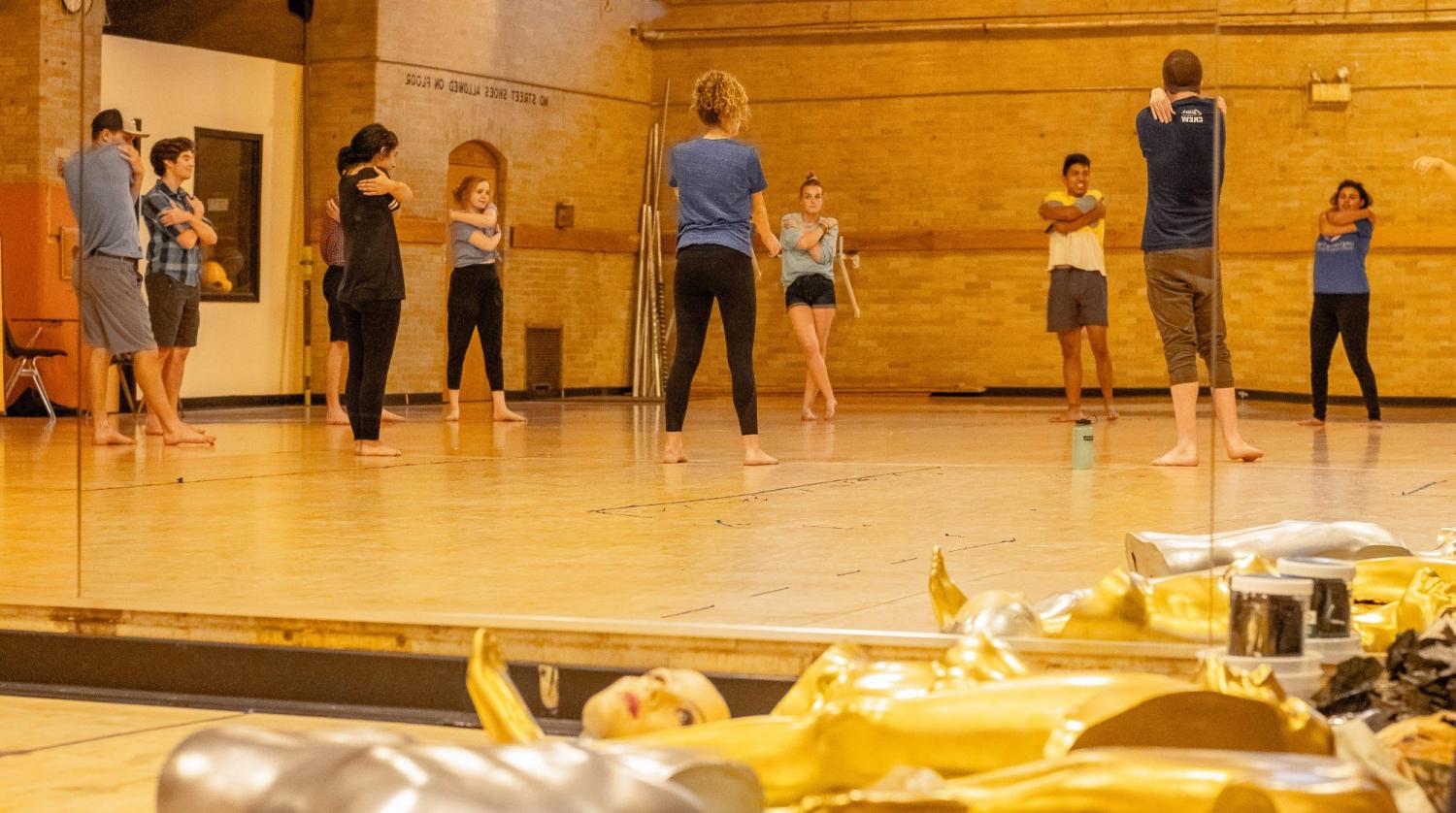 Lyndie Raymond was working in advertising in 2017 when she heard about something new that offered her a change of direction. She decided to apply for a spot in CU Boulder’s first-ever Experience Design MFA cohort. A year later, she arrived on campus, and not long after that, found herself packing into a university van leaving Boulder for New Mexico with six other students.

The group embarked on the six-hour drive to visit Meow Wolf—an immersive art experience in Santa Fe. It was a perfect example of real-world “experience design,” a type of design aimed at telling stories through spaces. In Meow Wolf’s case, the design thrives on the alien and surprise, and it became inspiration for the cohort’s most ambitious project.

Virtue of Reality, a free production running from Sept. 20-22, will transport audiences to a dystopian future in Carlson Gymnasium on CU Boulder’s campus. The project design mirrors the Meow Wolf experience, with audience members encouraged to explore the space and interact directly with actors and their surroundings.

“I think it’s just a natural progression of what people are looking for in entertainment these days,” said Raymond. “Creating this really awesome environment and then being able to run wild in it is really exciting.”

As invitees to a stakeholder event for the fictional corporation VeraRev, audience members will begin the experience with a short virtual reality headset presentation.

The space will resemble a futuristic haunted house—though Raymond emphasizes that the performance will not be scary—with natural, metropolitan and suburban settings. Actors will be situated in different settings throughout the production.

“We have backstories written for each of the characters and then there is a lot of improv that will happen,” said Raymond. “We’ve written little story cycles—little loops—that they’re living in. Within that, they’re able to play and improv. I think that’ll be a lot of fun, but it’s also challenging.”

New kids on the block

In December, Raymond’s group will be the first Experience Design MFA cohort to graduate from CU Boulder. The group is somewhat eclectic, coming from interior design, marketing, theatre and other backgrounds. 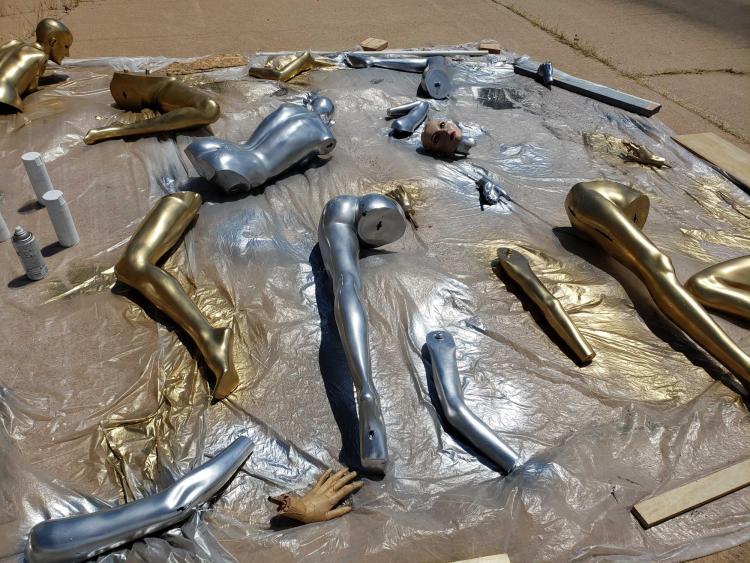 Top: The Experience Design cohort spray-painted mannequins to use as props for the performance (Credit: Adrianna Hipple)

“We come in together, we graduate together and then next fall the next group will come in,” she said. “So it’s really focused, which is nice.”

Raymond hopes to work curating visitor experiences in theme parks after graduating. She and her class will be well-suited to create similar experience across a range of industries, including museums, zoos, aquariums, memorials and select retail establishments.

“This is more like storytelling through spaces,” said Raymond. “I think storytelling is the main component, which sets it apart from industrial design, architecture or something like that.”

Creating entire immersive worlds take a lot of planning and hard work. The team behind Virtue of Reality began planning over a year ago.

After finalizing the plot last spring, the group got in touch with a carpenter and picked up some leftover props from past productions. They also picked up cans of paint and paintbrushes. Several members of the group stuck around Boulder over the summer to put the finishing touches on the set pieces themselves.

For a group focused on experience design, setting is one of, if not the, most important aspects of the production.

“Immersive means you’re not going to be sitting in a seat watching a show like in a regular theatre,” said Raymond. “You’re going to be a part of the story, so the audience members will get to participate in the set we build.”

Raymond hopes the work they’ve put into the set and the dystopian plot will pay off by leaving audiences with a new perspective.

“We just want people to recognize and see the beauty of what’s around them in this time we live in and to not take little things for granted.” 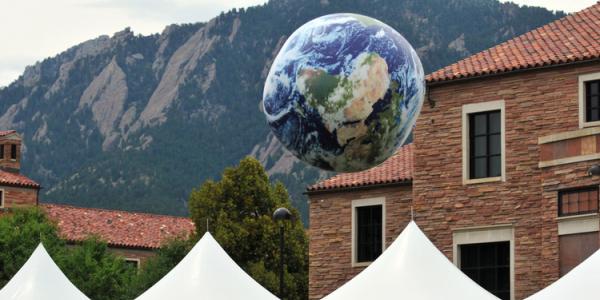 Get some laughs at the climate change comedy show April 22

The Stand Up for Climate Change Comedy Show will feature Comedian Chuck Nice, select pieces from 15 stand-up comedians from across the nation, winners from our international climate comedy video competition, comic antics by students and more. END_OF_DOCUMENT_TOKEN_TO_BE_REPLACED 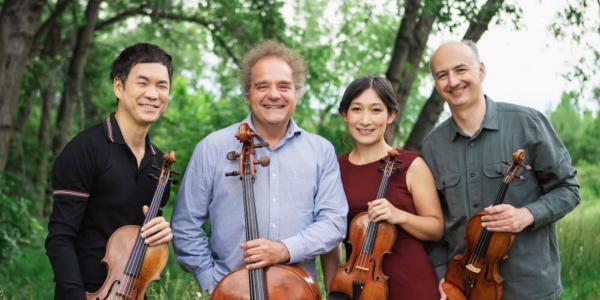 The Grammy-winning Takács Quartet has moved audiences and sold out halls at CU Boulder for more than three decades and counting. Join us for a rare live-streamed concert April 11. The performance will then be available through May 10. END_OF_DOCUMENT_TOKEN_TO_BE_REPLACED 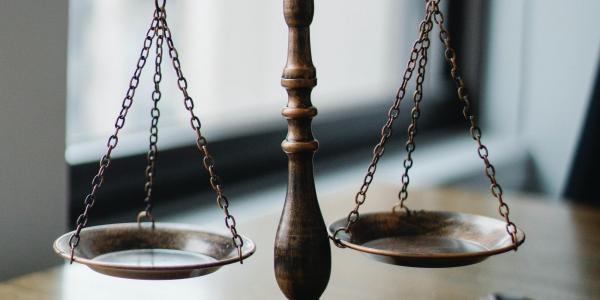 Measure for Measure: A play by William Shakespeare

Streaming at CU Presents starting March 12, in this six-person, one-act abridgement of Shakespeare's Measure for Measure, a religion, government and justice collide following the reinstatement of old morality laws in Vienna. Free, or pay as you can. END_OF_DOCUMENT_TOKEN_TO_BE_REPLACED
Return to the top of the page