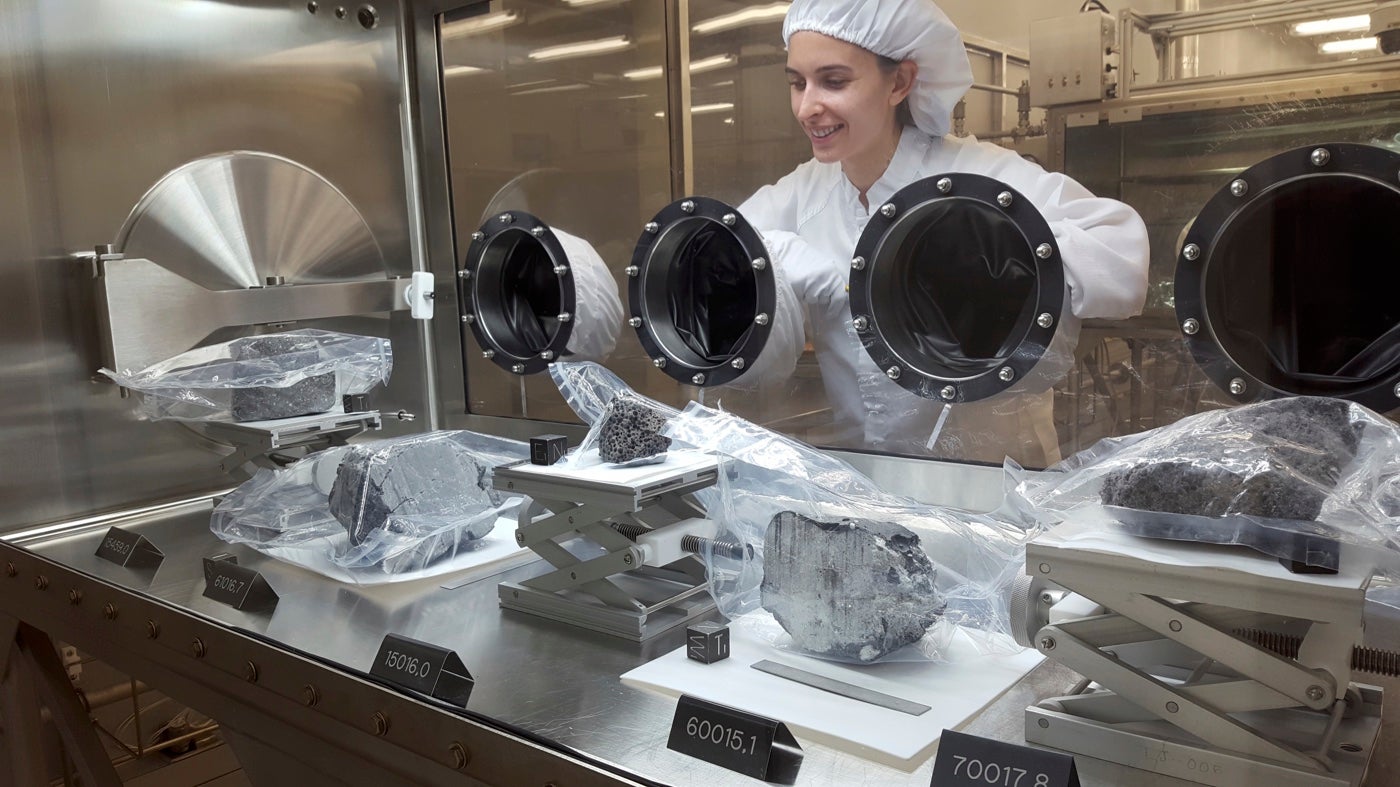 Listen to a podcast featuring an interview with geologist Carolyn Crow

More than 50 years after humans first set foot on the moon, one CU Boulder researcher will gain access to a cache of never-before-studied lunar rocks.

For geologist Carolyn Crow, it’s the project of a lifetime.

“You’re opening up brand new samples that nobody has ever seen,” said Crow, a research associate in the Department of Geological Science. “It’s almost like a new sample return mission.”

In 1972, Apollo 17 astronauts returned to Earth carrying moon rocks from the Taurus-Littrow Valley. The samples were sent to NASA's Johnson Space Center in Houston where they were initially processed and cataloged and are still housed today. A portion of the Apollo samples was set aside and stored at a temperature of minus-4 degrees Fahrenheit, not to be opened until technology improved.

“NASA purposefully put these samples away because they knew that in the future, we would have better instruments available and that we could do analyses on the samples that we couldn’t do back in the 1970s,” Crow said.

Now, the space agency has announced that it will be taking these special samples out of storage for the first time. Crow will be among the scientists taking the first close look at them as part of a team led by Jessica Barnes, an assistant professor at the University of Arizona. She hopes that this fresh injection of data will help scientists to answer lingering questions about the moon, such as how a magma ocean may have once spread over its surface. 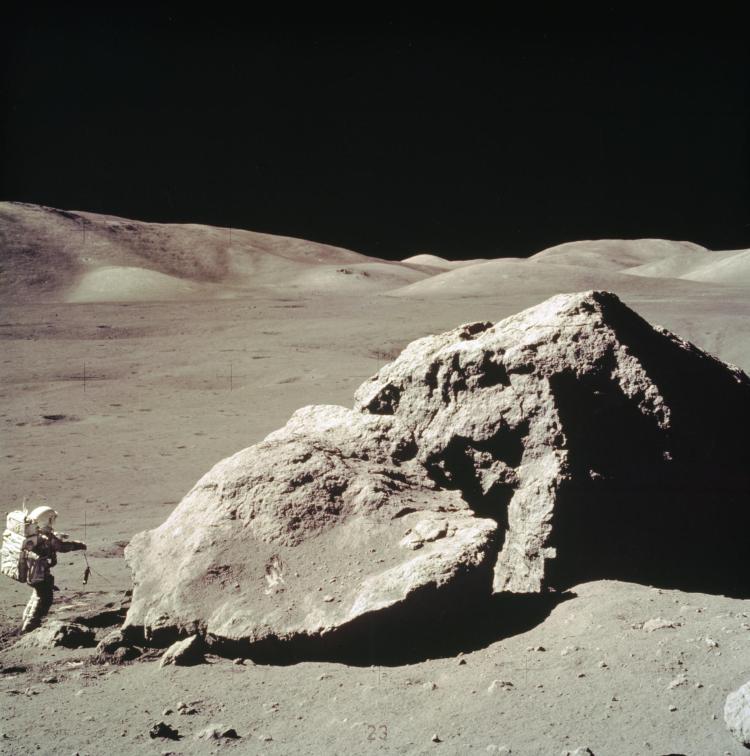 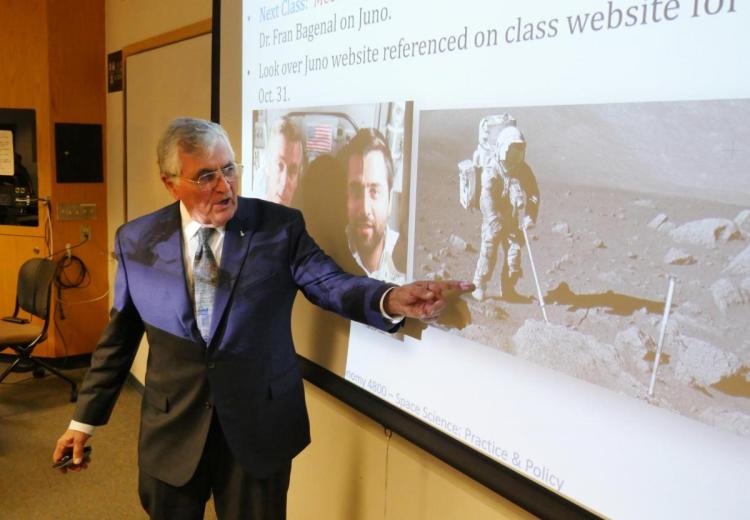 Moon rocks have already changed the face of science. Over the six U.S. space missions that touched down on the moon, astronauts collected more than 800 pounds of lunar pebbles and dust. Nearly a quarter of that yield came during Apollo 17, the only voyage to include a trained geologist, astronaut Harrison Schmitt.

“Those samples were the jumping off point for the last 50 years of planetary science,” Crow said. “They completely revolutionized our understanding of the moon, the early Earth and the whole solar system.”

Before Neil Armstrong and Buzz Aldrin stepped onto the moon, for example, researchers didn’t know how Earth’s only natural satellite first formed. Today, they believe that the moon was created when a planet the size of Mars crashed into Earth roughly 4.5 billion years ago, knocking loose a chunk of molten material.

But she added that there is still a lot that scientists don’t know about the moon, including the nature of the lunar interior and if it is still geologically active today.

That’s where the new samples come in. One of the long-awaited finds is a nearly 9-inch-long core that Schmitt collected a few yards from the Apollo 17 landing site. By analyzing the gases trapped in the unopened core, Crow said, researchers may learn about not only the interior of the moon, but also how water and other materials are deposited on the moon.

Crow and her colleagues won’t get to handle the samples personally until 2020. In the meantime, curation experts at NASA will begin the initial processing of the Apollo rocks—and even then, only from behind glass.

“There are multiple layers between you and all the samples,” Crow said. “Until that processing is done, they never see air.”

NASA is being careful with how it handles these samples, Crow explained, because some of the teams are interested to see how the ways the moon rocks are stored can influence their chemistry.

“With many teams working on the samples, we need to take extra care to make sure everyone can get their science done,” she said.

But she’s happy to wait if it means she will be among some of the first people to take a close look at these pieces of lunar—and human—history.

“Every sample takes on a personality,” Crow said. “You can really get to know these rocks. I love it.”

CU's Laboratory for Atmospheric and Space Physics will contribute scientific data systems and mission operations expertise to a NASA robotic mission to study the lunar surface prior to renewed human exploration. END_OF_DOCUMENT_TOKEN_TO_BE_REPLACED

Disks made up of rocks and dust swirl around stars across the galaxy. These features are the "fossil record of planet formation," said astrophysicist Meredith MacGregor. END_OF_DOCUMENT_TOKEN_TO_BE_REPLACED

New research adds another piece of evidence to the scientist philosophy known as the mediocrity principle: Galaxies are, on average, at rest with respect to the early universe. Jeremy Darling, a CU Boulder astrophysics professor, recently published this new finding in the journal Astrophysical Journal Letters. END_OF_DOCUMENT_TOKEN_TO_BE_REPLACED
Return to the top of the page