How did the Red Planet get all of its clouds? CU Boulder researchers may have discovered the secret: just add meteors.

Astronomers have long observed clouds in Mars’ middle atmosphere, which begins about 18 miles (30 kilometers) above the surface, but have struggled to explain how they formed.

Now, a new study, which will be published on June 17 in the journal Nature Geoscience, examines those wispy accumulations and suggests that they owe their existence to a phenomenon called “meteoric smoke”—essentially, the icy dust created by space debris slamming into the planet’s atmosphere.

The findings are a good reminder that planets and their weather patterns aren’t isolated from the solar systems around them.

“We’re used to thinking of Earth, Mars and other bodies as these really self-contained planets that determine their own climates,” said Victoria Hartwick, a graduate student in the Department of Atmospheric and Ocean Sciences (ATOC) and lead author of the new study. “But climate isn’t independent of the surrounding solar system.”

The research, which included co-authors Brian Toon at CU Boulder and Nicholas Heavens at Hampton University in Virginia, hangs on a basic fact about clouds: They don’t come out of nowhere.

“Clouds don’t just form on their own,” said Hartwick, also of the Laboratory for Atmospheric and Space Physics at CU Boulder. “They need something that they can condense on to.”

On Earth, for example, low-lying clouds begin life as tiny grains of sea salt or dust blown high into the air. Water molecules clump around these particles, becoming bigger and bigger until they form the large puffs that you can see from the ground.

But, as far as scientists can tell, those sorts of cloud seeds don’t exist in Mars’ middle atmosphere, Hartwick said. And that’s what led her and her colleagues to meteors.

Hartwick explained that about two to three tons of space debris crash into Mars every day on average. And as those meteors rip apart in the planet’s atmosphere, they inject a huge volume of dust into the air. 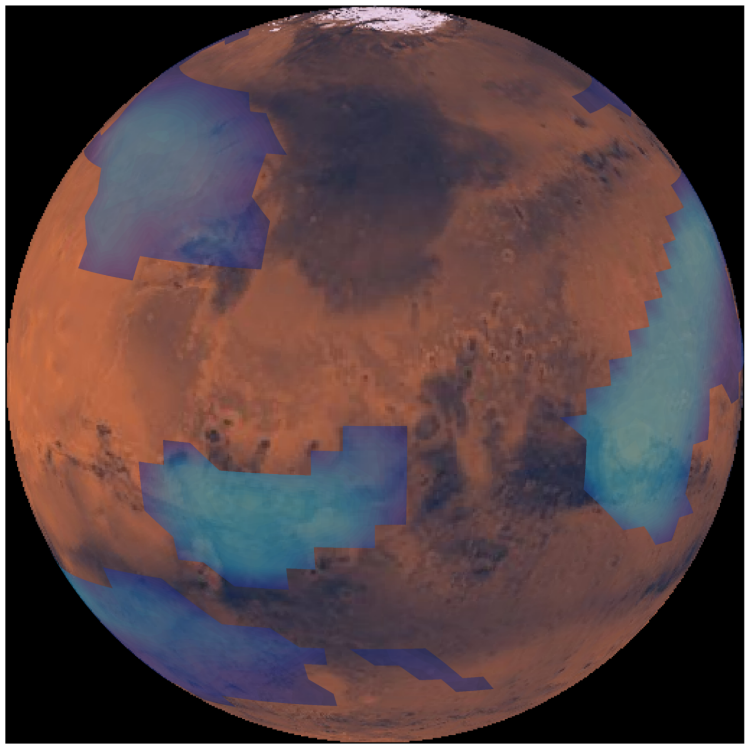 To find out if such smoke would be enough to give rise to Mars’ mysterious clouds, Hartwick’s team turned to massive computer simulations that attempt to mimic the flows and turbulence of the planet’s atmosphere.

And sure enough, when they included meteors in their calculations, clouds appeared.

“Our model couldn’t form clouds at these altitudes before,” Hartwick said. “But now, they’re all there, and they seem to be in all the right places.”

The idea might not be as outlandish as it sounds, she added. Research has shown that similar interplanetary dust may help to seed clouds near Earth’s poles.

But she also says that you shouldn’t expect to see gigantic thunderheads forming above the surface of Mars anytime soon. The clouds her team studied were much more like bits of cotton candy than the clouds Earthlings are used to.

“But just because they’re thin and you can’t really see them doesn’t mean they can’t have an effect on the dynamics of the climate,” Hartwick said.

The researchers’ simulations, for example, showed that middle atmosphere clouds could have a large impact on the Martian climate. Depending on where the team looked, they caused temperatures at those high altitudes to swing up or down by as much as 18 degrees Fahrenheit (10 degrees Celsius).

And that climactic impact is what gets Brian Toon, a professor in ATOC, excited. He said that the team’s findings on modern-day Martian clouds may also help to reveal the planet’s past evolution and how it once managed to support liquid water at its surface.

“More and more climate models are finding that the ancient climate of Mars, when rivers were flowing across its surface and life might have originated, was warmed by high altitude clouds,” Toon said. “It is likely that this discovery will become a major part of that idea for warming Mars.”

CU Boulder has been selected as a member of the United States Space Command Academic Engagement Enterprise, a new national program designed to expand collaboration and academic exchanges between universities and Space Command. END_OF_DOCUMENT_TOKEN_TO_BE_REPLACED

Since July 2022, a miniature satellite about the size of a shoebox has been orbiting Earth and monitoring how much solar energy reaches the atmosphere, one of the "most important" Earth science measurements. Now, scientists are finalizing their analysis of the first five months of the testing. END_OF_DOCUMENT_TOKEN_TO_BE_REPLACED

The historic spacecraft soon hit Earth's atmosphere flying at speeds of almost 25,000 mph. CU Boulder aerospace engineer Iain Boyd breaks down what will happen to the capsule, and how NASA will keep it safe on reentry. END_OF_DOCUMENT_TOKEN_TO_BE_REPLACED
Return to the top of the page