These hexagonally-shaped grains of silica, when suspended in a liquid crystal, may resemble elements in the periodic table. (Credit: Smalyukh lab)

In the not-so-distant future, researchers may be able to build atoms to your specifications with the click of a button. It’s still the stuff of science fiction, but a team at CU Boulder reports that it is getting closer when it comes to controlling and assembling particles called “big atoms."

The new research, published today in Nature, centers around colloidal particles that, when mixed with liquid crystals, act a lot like the elements of the periodic table. These particles give physicists the opportunity to probe how hydrogen, helium and other atoms behave and interact without needing to zoom down to the atomic level. 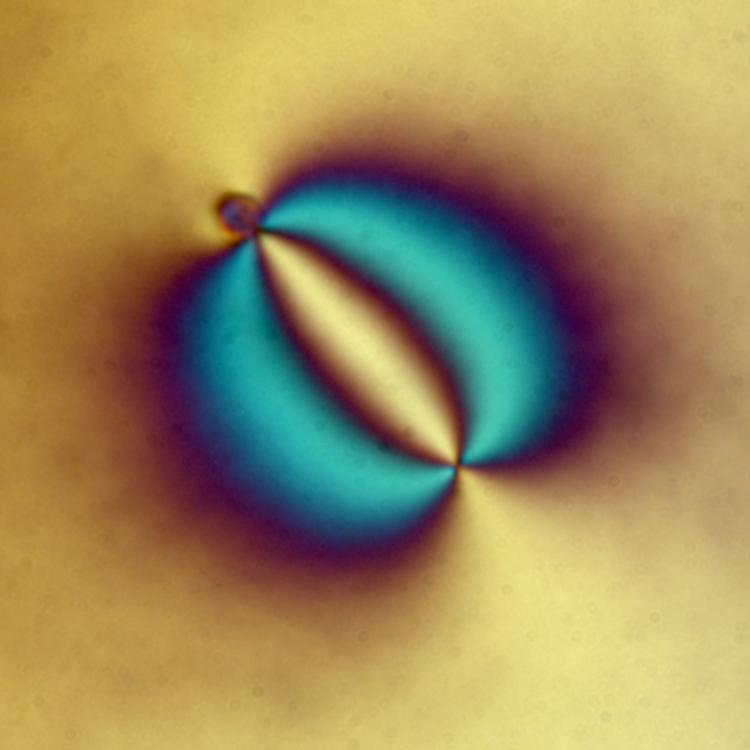 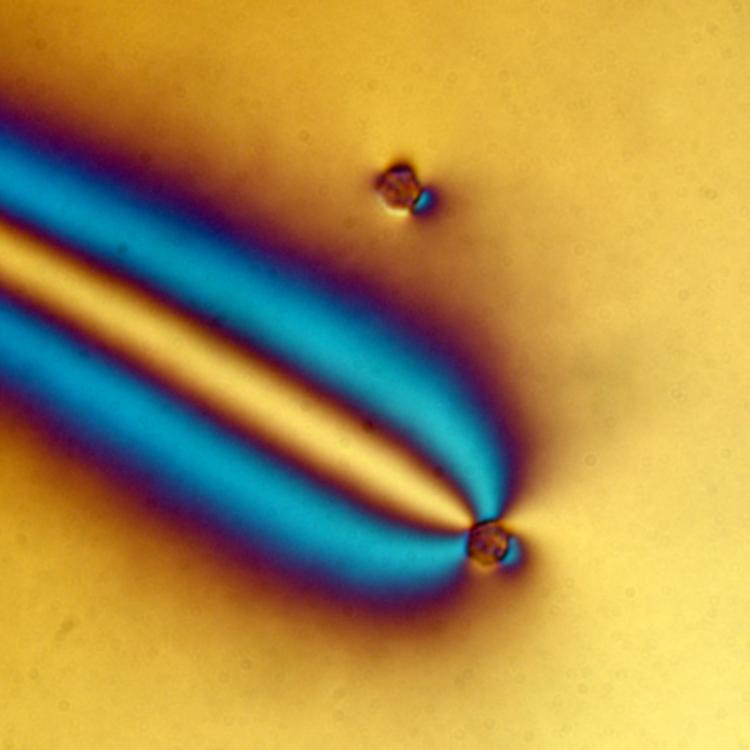 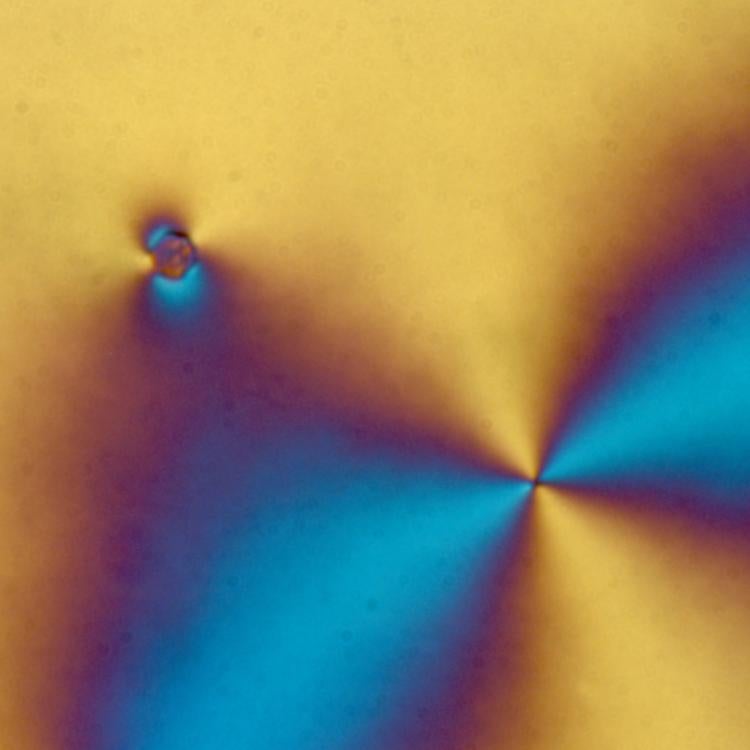 Exposing big atoms to different kinds of light causes the liquid crystal molecules around them to bend in unique ways. (Credit: Smalyukh lab)

By exposing the big atoms to different kinds of light, for example, the team showed that it could flip their charges with a flick of a switch. In other words, particles that once attracted each other now repel each other.

“Because we have so much control, we have the ability to design how these particles assemble and what properties they have,” said Ivan Smalyukh, a professor in the Department of Physics. “It’s like a designer toolkit.”

That designer toolkit begins with a simple ingredient: liquid crystals.

These materials, which provide the crisp images on your smartphone screen, are often made up of molecules in tidy arrangements, such as rods that all point in a single direction. In the last decade or so, however, scientists have noticed something odd about these fluid-like materials. If you drop particles, such as microscopic grains of silica, into liquid crystals, the once orderly molecules inside will bend and squish to make room for the new additions—a bit like shoving a football lineman into an already-crowded subway car.

And, remarkably, the way those liquid crystals bend can be mathematically analogous to the structures of atoms’ electron shells.

“How the liquid crystals bend around the particles is very important,” said Smalyukh, also in the Materials Science and Engineering Program and Department of Electrical, Computer, and Energy Engineering. “When you disrupt those molecules, it costs energy, and that energy drives interesting interactions.”

Bend liquid crystal molecules in just the right way and the bits of silica will clink into each other as if they were two atoms bonding together, but much bigger.

The problem, Smalyukh said, is that until recently, scientists had very little control over those big atom interactions. His group had the solution.

To make their unique colloidal mixture, Smalyukh and his colleagues used pieces of silica in the shape of hexagons for their big atoms. But before plopping those particles into liquid crystals, the researchers coated them in a type of dye that rotates when exposed to different kinds of light.

When the researchers exposed their mixture to a certain type of blue light, the liquid crystal molecules would bend around the hexagons following one pattern. Use a different kind of light and they would bend in an entirely different way.

The group reported that they could switch a big atom’s effective charge from positive to negative and back again on a whim.

“It’s almost like you can shine light and turn matter into antimatter,” said Ye Yuan, a postdoctoral researcher in physics and lead author of the new study. Other coauthors included postdocs Qingkun Liu and Bohdan Senyuk.

And, Yuan said, the team was able to control those interactions using an ordinary lamp with a filter on it—no high-powered lasers required.

“In principle, we could have a good sunny day in Colorado and bring our samples outside and see those interactions,” Yuan said.

Which gets him excited for what the team could build with these big atoms. The researchers believe that, with the right tweaks, they could use their method to assemble particles in unique ways, creating faux-atomic structures that don’t exist in nature—then dissolve those structures just as easily.

“In some ways, we still need to figure out what we can do with this,” Smalyukh said.

Building your own periodic table from scratch? Stay tuned.

CU Boulder neuroscientist Zoe Donaldson has found a new way to contribute to global science education. She and her team will spend much of August helping European high school students learn the finer points of gene manipulation in prairie voles. END_OF_DOCUMENT_TOKEN_TO_BE_REPLACED

Doctoral students Aaquib Tabrez and Matthew Luebbers, along with their advisor Bradley Hayes, used augmented reality Minesweeper to gain insight into a robot’s decision-making process. They were awarded runner-up for best student paper at an international conference. END_OF_DOCUMENT_TOKEN_TO_BE_REPLACED

With a project called Tinycade, graduate student Peter Gyory has set out to recreate that arcade parlor experience from childhood—entirely out of junk. END_OF_DOCUMENT_TOKEN_TO_BE_REPLACED
Return to the top of the page