The second annual Three Minute Thesis (3MT) competition was held at the Graduate School in February. Using only one slide, competitors were challenged to describe their research in three minutes to a panel of judges and an audience from the community. 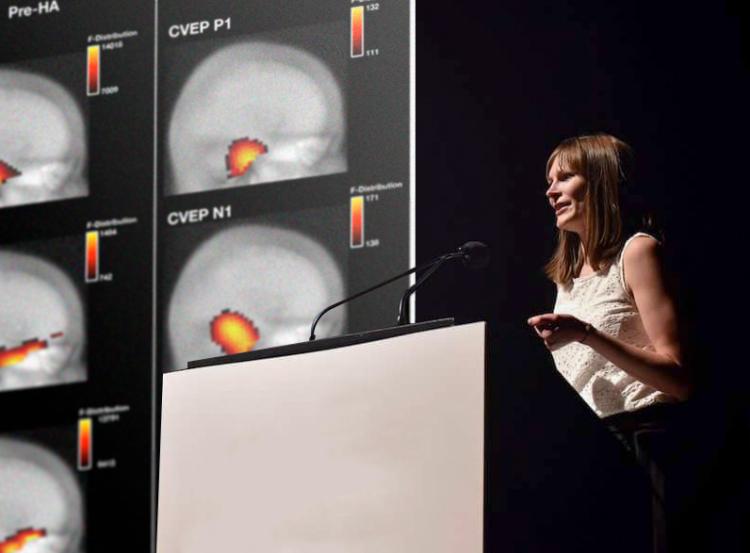 Glick’s 3-minute talk was titled Your Brain on Hearing Aids. Glick who earned a PhD in February, studied speech, language and hearing sciences; cognitive science; and neuroscience in the Institute of Cognitive Science at CU Boulder. She has a research position at Advanced Bionics, a worldwide cochlear implant company in California.

Luke Bury was runner-up at the 3MT competition and took second-place at the first annual Three-Minute Talk statewide competition.

Bury, a PhD candidate in the Department of Aerospace Engineering Sciences, spoke on Deep Space and Ocean Worlds. He kicked off his talk by explaining the requirements for life and the possibility of life of some kind on Europa, one of Jupiter’s 79 moons.

From an audience’s perspective, many presentations in science and engineering suffer because the talks are unfocused. This lack of focus reduces the audience’s understanding of what the speaker is trying to convey. The Graduate School organized workshops on preparation, presentation and communication skills to teach students how to describe their work effectively.

To help prepare competitors for their 3MT presentations, multiple workshops were held on a variety of topics. The workshops were organized by Leslie Blood, director of graduate community and professional development.

“What’s interesting and makes sense to them may not be interesting or make sense to someone who’s not in their field,” Blood said. “The whole point of 3MT is how do you communicate your entire body of research in 3 minutes? So, the point of the workshops is to help them build confidence in their public speaking skills. That gets them comfortable talking about their work, and now they have something they’ve practiced and can use in their academic careers.”

Save your hearing, save your brain

“As research started coming out showing a link between untreated hearing loss and cognitive decline,” she said, “I realized this was an area of research that has not been well investigated. This is an area where I have an opportunity to make an impact.”

Imagine running on an empty gas tank for 10 years. That is the average amount of time people with hearing loss wait before getting their hearing checked and treated. Only 15 percent of adults who could benefit from hearing aids wear them. People don’t wear them for a number of reasons. One, is that hearing loss happens so gradually, many people don’t realize how much they’re compensating or how much the hearing loss is affecting them.

“What if I told you a hearing aid could fight dementia?” Glick said. “Would you get your hearing tested? Imagine your brain is a gas tank and contains only a finite amount of fuel. As we get older and our hearing gets worse, our brain burns more fuel to listen and to comprehend. The more fuel is burned for cognitive resources devoted just for listening, the less fuel there is for other tasks like memory.”

Based on her findings, Glick stresses that routine hearing screening should be conducted on adults.

In her new role, Glick will gain important industry experience and working with an interdisciplinary team of scientists, engineers and clinicians to develop hearing technologies that better mimic how the brain hears and processes sound. She will continue to teach at the college level and collaborate on research projects.

Fly to me to the moon…of Jupiter 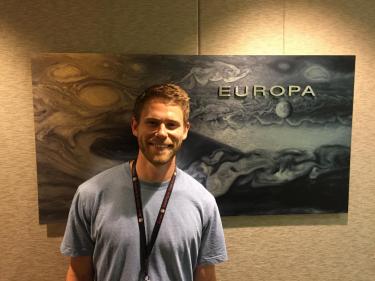 Bury didn’t grow up with an interest in space. He didn’t know anything about it and he didn’t know anyone who knew anything about it. In high school he wanted to be a zoologist, but then he began reading books by popular science writers such as Neil deGrasse Tyson and Michio Kaku. In one of books he learned about Europa and the possibility of life there, which rocked his world.

Europa is encased in a shell of ice covering a liquid saltwater ocean kept warm by energy from Jupiter’s tidal forces, which generate an internal heat. What has intrigued Bury about Europa ever since is the possibility of finding life there.

There are three requirements for life on Earth: water, chemistry and energy. Since Europa has all three, it’s not a stretch to think that it could support life of some kind.

“Europa checks the three big boxes,” Bury said. “That makes Europa an appealing target for exploration. I became obsessed and from there decided to get an aerospace engineering undergraduate degree. Has there been another genesis of life out there? It’s a big question.

Bury is in his third year as a PhD student. His research involves designing trajectories through space, which would allow spacecraft to safely land on and explore Europa. This is a daunting technological challenge for several reasons. Jupiter has a strong magnetic field that traps thick belts of radiation that threaten to roast a spacecraft if it lingers too long or gets too close. With more than 300 times the gravitational pull of Earth, Jupiter can whip spacecraft around in orbit at tremendous speeds.

Reducing the excessive speeds requires a lot of rocket fuel, which adds a great deal of weight to the spacecraft. Weight constraints limit the number of scientific instruments that can be carried to study the ocean. Bury’s research focus is about saving fuel by taking advantage of the complex gravitational interaction between Jupiter and its moons to naturally slow a spacecraft and allow for a safe landing on Europa.

“My favorite part of this research, aside from the fact I get to spend my days thinking about aliens, is that the work doesn’t stop with Europa,” he said. “There are at least eight other bodies in the solar system we also suspect of having subsurface oceans. Determining if we’re alone in the universe is not just a goal of NASA” he said. “It’s a fundamental question of humanity. Through my research into low speed landings on ocean worlds I’m hoping to help answer it.”

Bury has a NASA fellowship at the NASA Jet Propulsion Laboratory in Pasadena, California. The fellowship allows him regular collaboration with centers like JPL where he conducts his research for two months a year. After his PhD, he wants to work at JPL and continue exploring the solar system. 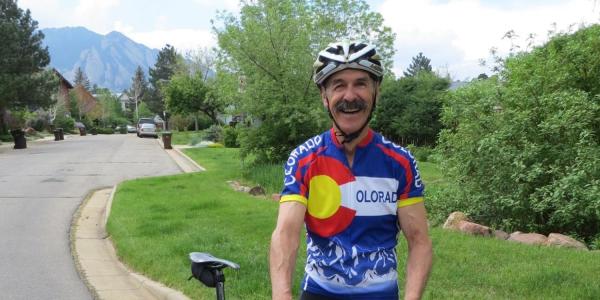 Former arts and sciences dean Peter Spear has fused his love of cycling with his desire to help students—resulting in a new scholarship tied to the College of Arts and Sciences’ annual cycling event, which supports high-achieving students in financial need. END_OF_DOCUMENT_TOKEN_TO_BE_REPLACED 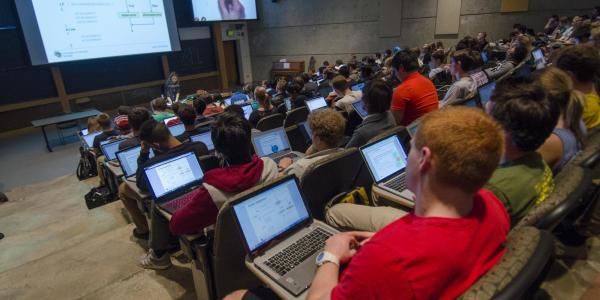 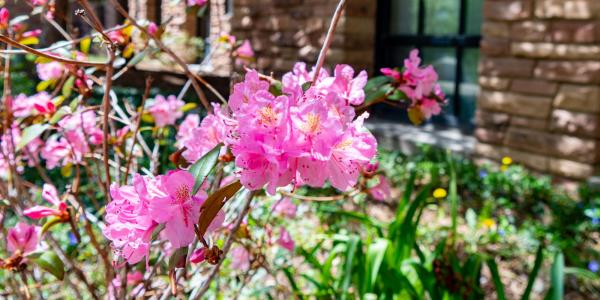 Build your resilience and community with help from the Resiliency Program

Consider joining the semester-long Resiliency Program. It's designed to help you improve your academic experience on campus through connection with peers and support from staff. The deadline to apply is Aug. 1. END_OF_DOCUMENT_TOKEN_TO_BE_REPLACED
Return to the top of the page