Constellation of weather satellites to cover the globe

Want more accurate weather forecasts? You’re in luck: Last month, researchers at CU Boulder saw the fruits of their labors launch aboard a new satellite. That satellite is the first in a planned fleet of Earth-orbiters that the team says will one day record weather data at every point on the globe every 15 minutes.

The project, led by CU Boulder electrical engineering professor Al Gasiewski, is a partnership between the university and Colorado-based Orbital Micro Systems (OMS).

The team’s inaugural eye-in-the-sky blasted off from NASA’s Wallops Flight Facility in Virginia onboard a Northrop Grumman rocket. The satellite, dubbed IOD-1 GEMS, will be placed in orbit from the International Space Station in the coming months.

That satellite will pack a lot of power in a tiny package, Gasiewski said. The team’s satellite is about the size of a loaf of bread and carries a precise—albeit shrunken-down—microwave sensor for observing weather patterns. 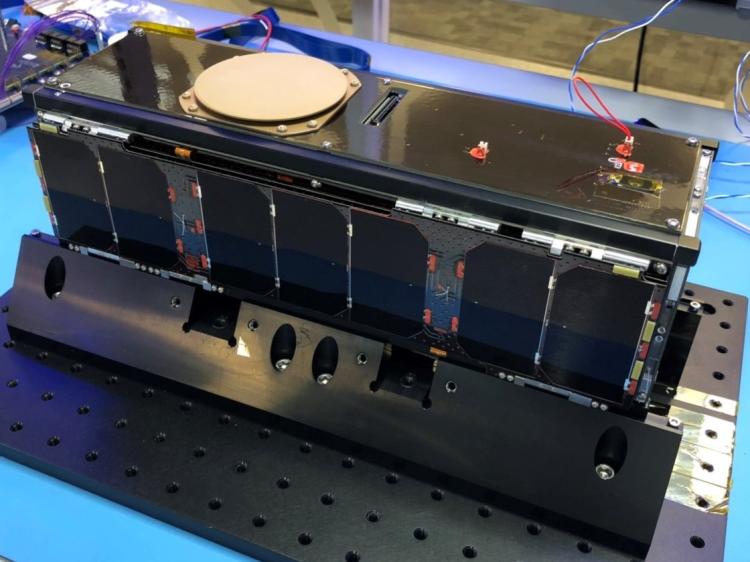 The first of a planned fleet of small weather satellites designed by CU Boulder and Orbital Micro Systems. (Credit: OMS)

Over the next several years, OMS hopes to launch close to 50 more of these “CubeSats” into low-Earth orbit, creating a constellation that the team said will vastly improve global weather observation coverage.

That global coverage, Gasiewski added, could improve the timeliness of current weather reports for people across the U.S. and provide early warnings for storms and dangerous weather events in other parts of the world.

“These are areas where many countries don’t have the money to pay for a weather service like we have in the U.S.,” said Gasiewski, a professor in the Department of Electrical, Computer and Energy Engineering. “It’s these emerging economies that could be served by this global fleet.”

Such information won’t be free, but Gasiewski hopes that it will be the first step in creating a weather system that moves at the pace of actual weather—from freak blizzards to sudden downpours.

“We are trying to stare down at the Earth and see the atmosphere changing at its natural rate of variation for improved weather forecasting,” he said.

For Gasiewski, the launch has been a long time coming. He was a graduate student in the 1980s when he and his advisor first had the idea of monitoring weather in near real-time using microwave technology.

The researcher explained that microwave radiation is the ideal tool for observing patterns in Earth’s atmosphere. Unlike many current weather satellites, which rely on visual or infrared cameras, microwave sensors can peer through thick cloud cover to record the movement of oxygen or water vapor below.

As Gasiewski put it, “This is the range of frequencies that makes sense for planetary awareness.”

Some current satellites, such as a small fleet operated by the U.S. National Weather Service, do include those kinds of sensors. But, Gasiewski said, their coverage is poor. Those satellites, for example, only pass over the same spot of land once every few hours—and even then, only above North and South America.

Gasiewski wanted to do better. In 2013, he helped found Orbital Micro Systems, headquartered in Boulder, and facilitated the licensing of key CU Boulder-developed technology that powers the company’s commercial satellite program. Gasiewski currently serves as the chief scientist for the company.

The partnership is all about thinking small, not big. Over several years, Gasiewski and his colleagues have taken technology that traditionally rides on satellites the size of cars and miniaturized it. As a result, his team has developed a model for replaceable satellites.

Each of the group’s planned 48 CubeSats, Gasiewski said, would stay in orbit for just a few years then get switched out with a new version.

“We start out with a satellite that’s simple, and each one is going to add a little more complexity,” he said.

Once that system is up and running, Orbital Micro Systems plans to market its data to agricultural producers, transportation providers and other business owners around the world. The company will also link its up-to-date observations to tools that create weather forecasts.

Gasiewksi points to recent floods in Africa and the U.S. as examples of why such timely alerts are needed. Large portions of the Midwest flooded following March’s “bomb cyclone,” while severe downpours caused hundreds of deaths in Mozambique.

He’s also looking forward on a personal level to the steps beyond the launch—the culmination of more than 30 years of work.

“I can’t tell you how excited I am,” Gasiewski said. “Watching the launch was an important step, but proving the commercial value of what we’ve developed at CU in space is a huge step forward for the team and the world.”

CU Boulder geologist Lisa Mayhew serves on the science team for NASA’s Perseverance rover, an intrepid machine that has crossed over nearly 8 miles of the surface of Mars—and is helping to recreate the forces that shaped this planet into what it looks like today. END_OF_DOCUMENT_TOKEN_TO_BE_REPLACED

On Monday, NASA’s Double Asteroid Redirection Test slammed into an asteroid called Dimorphos at speeds of more than 14,000 miles per hour. CU Boulder aerospace engineer Jay McMahon breaks down how this test could one day help to protect life on Earth. END_OF_DOCUMENT_TOKEN_TO_BE_REPLACED

In two years, a dust analyzer designed and built at CU Boulder will launch aboard NASA’s Europa Clipper spacecraft, aiding in its mission to determine if Jupiter's icy moon Europa has conditions that could support life. END_OF_DOCUMENT_TOKEN_TO_BE_REPLACED
Return to the top of the page