Birds break evolutionary rules when it comes to feather color

A yellow (left) and black (right) Gouldian finch take a break together on a branch. (Credit: Nigel Jacques)

Read the original story from The Cornell Lab of Ornithology.

A highly endangered rainbow-colored Australian finch is breaking all the rules when it comes to avian evolution, according to new research published today by scientists from CU Boulder, the Cornell Lab of Ornithology, the University of Sheffield in the United Kingdom and other institutions. 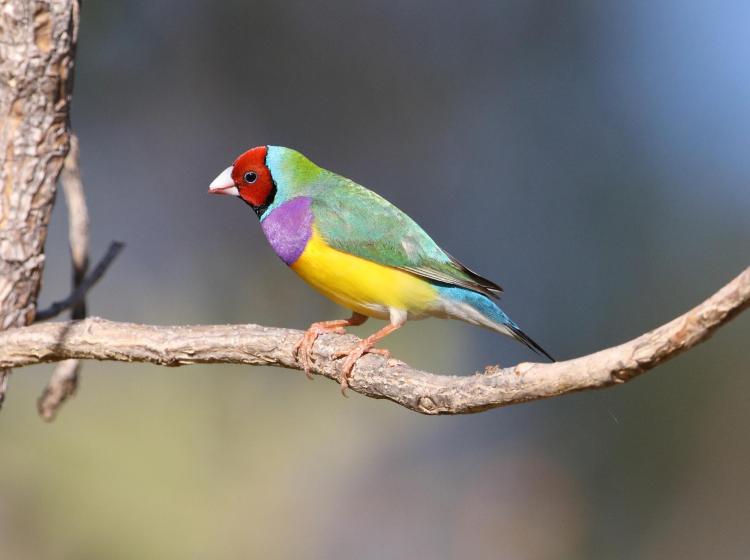 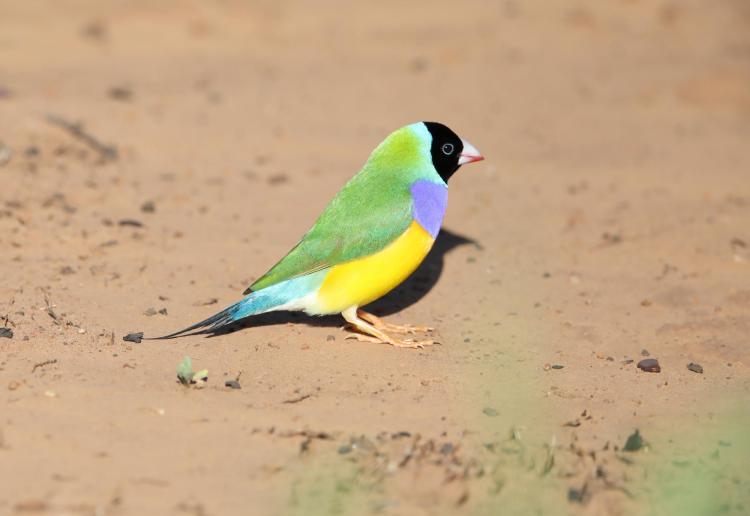 There appears to be an underlying selection mechanism at work among Gouldian finches—a mechanism that allows this species to produce and maintain individuals with red heads, black heads, and yellow heads. The authors reveal what this additional evolutionary process might be in the journal Nature Communications. "Most people have heard of natural selection," says lead author Kang-Wook Kim at the University of Sheffield. "But 'survival of the fittest' cannot explain the color diversity we see in the Gouldian Finch. We demonstrate that there is another evolutionary process—balancing selection—that has maintained the black or red head color over thousands of generations."

The yellow-headed type (actually more orange) is produced by a completely different mechanism that is not yet understood. Yellow-headed Gouldian Finches make up only 1 to 2 percent of the wild population.

"Having distinct multiple color types—a polymorphism—maintained within a species for a long time is extremely rare," explains co-author David Toews, who did this work as a postdoctoral researcher at the Cornell Lab and who is now at Pennsylvania State University. "Natural selection is typically thought of in a linear fashion—a mutation changes a trait which then confers some reproductive or survival advantage, which results in more offspring, and the trait eventually becomes the sole type in the population."

Studies have shown the red-headed finches have the apparent advantage. Female Gouldian Finches of all colors prefer the red-headed males, who also happen to be more dominant in the social hierarchy. So why hasn’t the black-headed type disappeared? It turns out there are disadvantages to having a red head, too, such as higher levels of stress hormones and poorer reproductive outcomes.

"If advantages are cancelled out by concurrent disadvantages, these two color types can be maintained—that’s balancing selection," Toews explains. "Red forms are not as common in the wild, so the counterbalancing pressure reduces the advantage of being red. That’s super cool."

The researchers zeroed in on a particular gene called follistatin which is found on the Gouldian Finch sex chromosome and regulates melanin to produce either red or black-headed finches. For the yellow morph, a different gene, not located on the sex chromosome, is controlling the head pigmentation, but it hasn’t yet been found and it’s not clear what forces are allowing the yellow morph to persist in the wild.

In another twist, Taylor and Toews have done previous research that revealed the genes likely governing the plumage differences between North American Blue-winged and Golden-winged Warblers—and one of those regions is in the same spot on the sex chromosome that differs among Gouldian Finches with different head colors.

"The probability that we’d locate the exact gene region that governs plumage differences in both the Gouldian Finch and the two warblers was almost zero," says Toews. "But now that we've done it, it opens up the possibility that the same region in other species may also be controlling plumage color."

In celebration of Earth Day’s 51st anniversary, CU Boulder Today explores 10 research-related discoveries that have the potential to positively change the way we live and soften humanity’s imprint on our precious planet. END_OF_DOCUMENT_TOKEN_TO_BE_REPLACED

By looking at this newly emerged bird, a CU Boulder-led research team found an ‘evolutionary shortcut’ for speciation. END_OF_DOCUMENT_TOKEN_TO_BE_REPLACED
Return to the top of the page