There isn’t much to hear in the middle of Antarctica. As CU Boulder’s Brian Hynek puts it, “There’s just wind and not wind.” 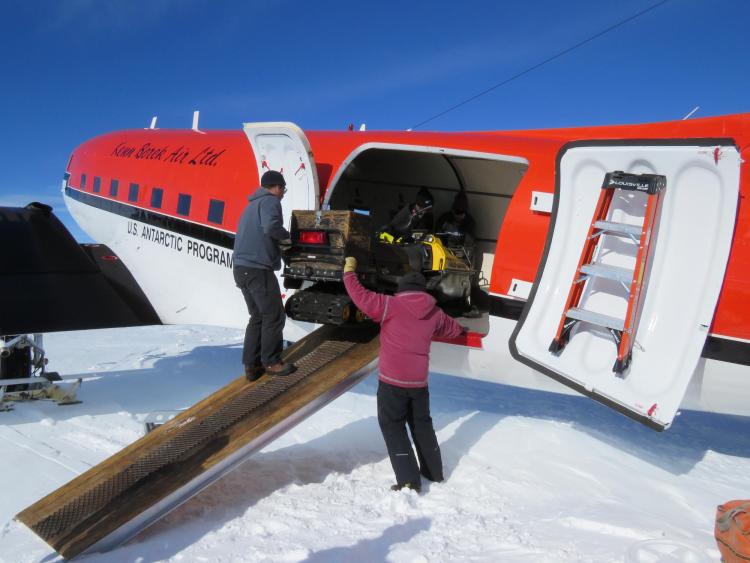 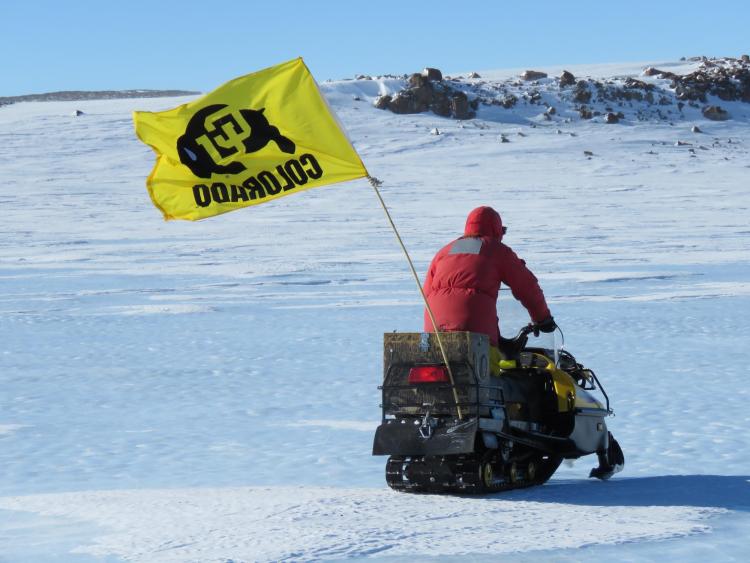 But on some nights, the scientist, who traveled to the continent this winter, also listened to the glacial ice moving below his campsite in Davis-Ward. This moraine valley is tucked into the Transantarctic Mountains, a several-hour flight south from McMurdo Station, the most common stopping point for scientists visiting the forbidding continent.

“You’re laying right on top of the ice, basically just on your Therm-a-Rest, and you could hear it cracking down below—a really eerie cracking as the ice moves away from you,” said Hynek, an associate professor in the Department of Geological Sciences.

Hynek, who studies the possibility of life on other planets, however, didn’t make the long journey to one of the loneliest places on Earth to explore the South Pole. He was hunting for pieces of alien worlds.

The researcher took part in this year’s Antarctic Search for Meteorites (ANSMET) expedition. The project is led by Ralph Harvey at Case Western Reserve University and James Karner at the University of Utah.

From December 2018 through January 2019, Hynek and five other scientists, together with two mountaineers, scoured the ice around Davis-Ward to search for chunks of space rocks that had crashed down to Antarctica.

Such meteorites, Hynek said, provide rare windows into the geology of bodies in our solar system where no human has ever set foot, including asteroids and Mars. They also gave him an excuse to escape the noise of the modern world, all while contributing to science.

“I love sitting in a tent for seven weeks in a place where 20 people in the history of human civilization have ever been,” said Hynek, also of the Laboratory for Atmospheric and Space Physics. “It’s pretty amazing to snowmobile up a mountain that no one’s ever been on, seeing a view that no human’s ever seen, putting a footprint somewhere for the first time in history.”

You don’t have to travel to mountains that no person has ever climbed, of course, to find meteorites, Hynek said—they come down everywhere.

But it helps. That’s because the craggy Transantarctic Mountains act as a sort of fishing net for these rocks, trapping and concentrating meteorites that have been swept up in glacial ice flowing there from the South Pole.

It’s one reason why ANSMET, which is supported by NASA and the National Science Foundation, has been so successful. Since 1976, the project has collected more than 22,000 meteorites, roughly one-third of all such samples known.

To find this year’s additions, Hynek and his colleagues made a systematic search of Davis-Ward. Over seven weeks, the team zipped back and forth over miles of ice every day on their snowmobiles, keeping their eyes peeled for shiny, black rocks. 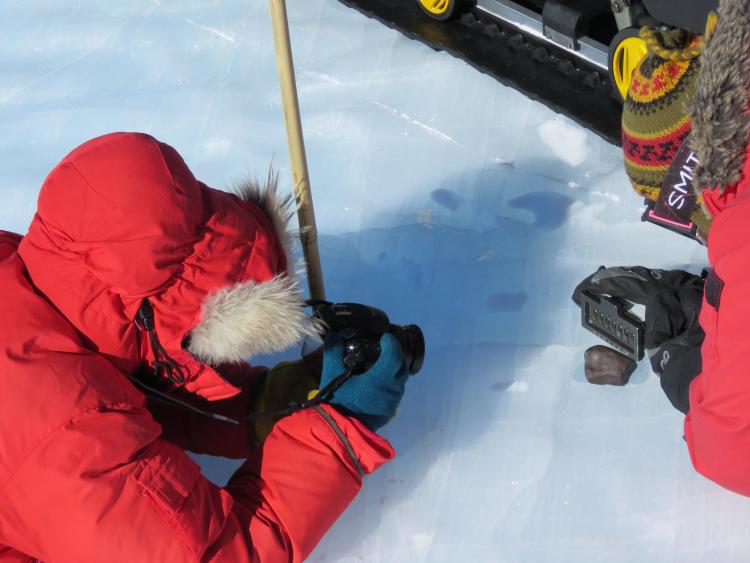 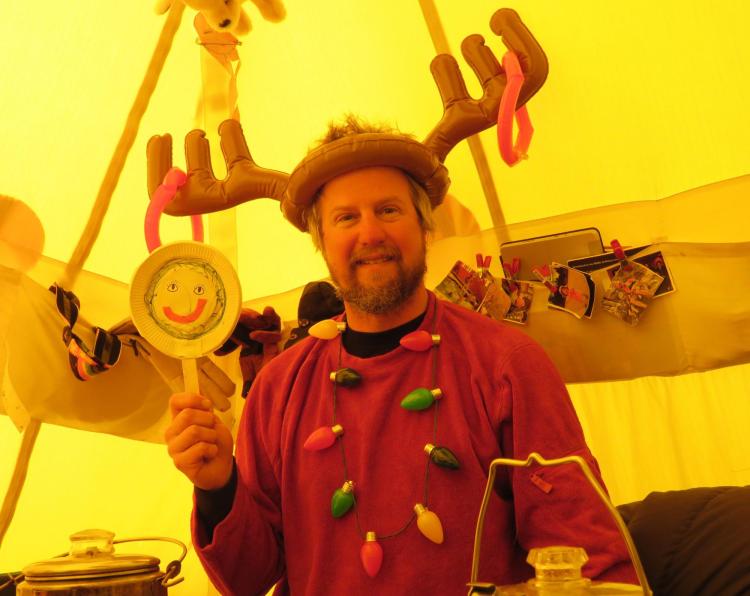 “On some of the places where we’re driving our snowmobiles, there’s two miles of ice below you,” Hynek said. “If there’s a rock sitting on top of the ice, it probably came from space.”

In all, they collected 865 meteorites, ranging from thumb-sized pieces to chunks the size of cantaloupes—almost double the number that project leaders were expecting. Hynek may never handle those meteorites again himself. Right now, they’re in cold storage and in route to NASA and Smithsonian Institution research labs.

But, he said, even the smallest samples can hold a treasure trove of information about the solar system. Hynek, who currently leads CU Boulder’s Center for Astrobiology, for example, focuses on the history of volcanic eruptions on Mars and how that geologic instability may have created conditions suitable for microbial life.

“Within these meteorites are trapped gases and all sorts of things that can tell you about what the eruption conditions were like on Mars,” he said. “These really are precious samples.”

Finding them brought its share of adventures, too. Even at the height of Antarctic summer, Hynek said, temperatures at Davis-Ward hovered around -10 to 5 degrees Fahrenheit.

During one three-day stretch, his team hunkered down in camp as the region was slammed by winds that hit at least 80 miles per hour. The researchers had to park their snowmobiles on several tents to keep them from potentially blowing away.

The key to surviving such moments, Hynek said, is “to think warm thoughts.”

But the expedition also wasn’t without its comforts. The eight-person crew celebrated Christmas, New Year’s Eve and three birthdays in Antarctica. For Christmas, they decorated a snowmobile with twinkling lights and held a potluck with nachos, bacon-wrapped scallops and a no-bake cheesecake.

To ring in the New Year, the ANSMET team played cards and stayed up until midnight—which, Hynek said, was indistinguishable from the rest of the day because the sun never set during his entire stay in Davis-Ward.

“I enjoy the peace and solitude,” Hynek said. “I need that once in a while to refresh me for when I come back to 2,000 emails.”

A new NASA report shows that the University of Colorado Boulder is the top university recipient of NASA astrophysics technology grants. END_OF_DOCUMENT_TOKEN_TO_BE_REPLACED

CU Boulder has been selected as a member of the United States Space Command Academic Engagement Enterprise, a new national program designed to expand collaboration and academic exchanges between universities and Space Command. END_OF_DOCUMENT_TOKEN_TO_BE_REPLACED

Since July 2022, a miniature satellite about the size of a shoebox has been orbiting Earth and monitoring how much solar energy reaches the atmosphere, one of the "most important" Earth science measurements. Now, scientists are finalizing their analysis of the first five months of the testing. END_OF_DOCUMENT_TOKEN_TO_BE_REPLACED
Return to the top of the page