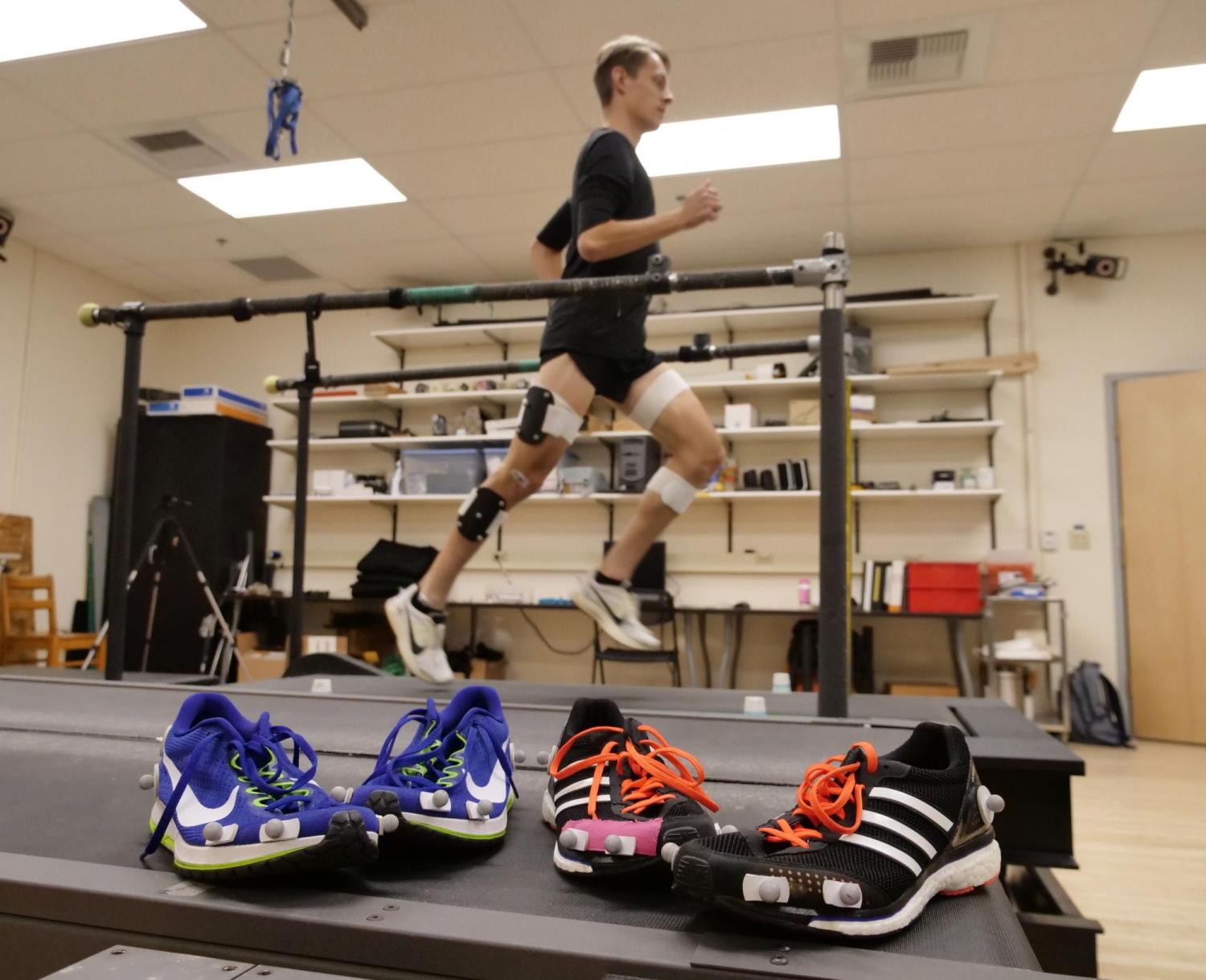 “This paper demonstrates that the bulk of the energy saved through this shoe comes through its softer, better foam,” said senior author and integrative physiology professor Rodger Kram. “The carbon fiber plate is just a cherry on top.”

The study, published today in the journal Sports Medicine, marks the latest scientific chapter for the Nike Vaporfly 4%, the fabled racing flat worn by five of the six top finishers at this month’s New York City Marathon and the two men who toppled the marathon and half marathon world records earlier this fall.

Previous CU Boulder research found that the shoe—which features a thick foam midsole with a spoon-shaped plate inside—enables athletes to exert, on average, 4 percent less energy while running. That finding inspired the shoe’s name. For a four-hour marathoner, 4 percent savings translates to almost 10 minutes faster. For a world-class 2:03 marathoner, it could make the first sub-two-hour marathon possible.

The looming question among runners, shoe manufacturers and critics who have suggested it be banned: Exactly what makes this shoe so fast?

A combination of factors

To find out, Shalaya Kipp, then a graduate student in Kram’s lab, enlisted 10 competitive male runners who wear a size-10 shoe and could comfortably run a 10K in under 35 minutes. Kipp and lead author Wouter Hoogkamer, a postdoctoral researcher, placed reflective markers on the runners’ legs and shoes, then had them run for five minutes on a treadmill at a six-minute-per-mile pace while a 3D motion-capture system measured their joint mechanics. They also took measurements of the force with which the runners hit the ground and the energy returned with each step.

Then the researchers compared how running biomechanics differed between shoes.

“We found that it is not one magic thing that explains the metabolic savings in this shoe, but rather a combination of a whole bunch of biomechanical factors related to the foam and the plate,” said Hoogkamer.

Contrary to what they expected, they found no difference in the runners’ knee or hip joint mechanics between shoes. But they did find that those wearing the 4% shoes didn’t have to exert as much muscular torque at their ankles, and thus the calf muscles did not have to do as much work. Further, the plate made the shoe less flexible and thus the foot muscles that stabilize the toe joints didn’t have to work so hard.

The earlier study found that the foam cushion returns a whopping 87 percent of the energy it takes in with each step.

“This shoe doesn’t give you energy but it prevents you from losing as much energy every time your foot strikes the ground,” says Kram. “That can make a big difference.” 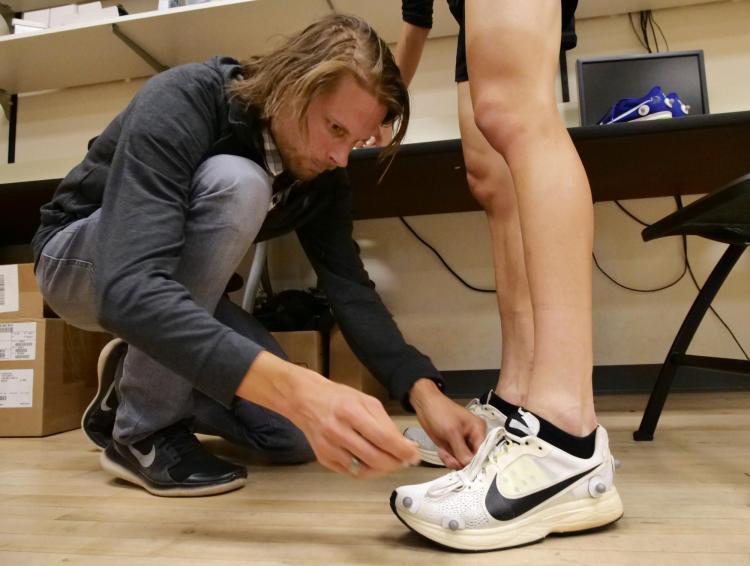 Wouter Hoogkamer places motion sensors on a runner in order to test the biomechanics of the Nike Zoom Vaporfly 4% shoe. (Credit: Casey A. Cass/CU Boulder)

The shoe is the latest innovation in what some are calling an escalating “shoe arms race” as companies one-up each other in hopes of breaking the two-hour marathon barrier.

In September, Kenyan marathoner Eliud Kipchoge officially broke the world marathon record in the 4% shoe, with a time of 2:01:39 at the Berlin Marathon. A month later, Abraham Kiptum broke the men's half-marathon world record in the shoes, clocking 58:18.

Some critics have called for the International Association of Athletics Federations ban the shoe, suggesting the spoon-shaped carbon-fiber plate embedded in the foam sole acts like a spring and gives athletes an unfair advantage. The study suggests it merely stiffens the shoe.

“When we measured the energy stored and returned in the plate, we found it to be minuscule,” said Hoogkamer, noting about 50 times more energy savings come from the foam. “Lots of shoes have foam midsoles and every foam has some spring action to it.”

Nike provided the shoes but this latest study was not otherwise funded by Nike.

The research team hopes their research can lend scientific evidence to the ongoing debate over what constitutes unfair advantage in shoe design. More importantly, they hope it can help companies design better shoes for runners of all abilities.

“The point of foot races is to see who can run the fastest and these new technologies help people to run faster,” said Kram.

His advice for marathoners gunning for a personal-record: Consider a resilient shoe with a thick cushion.

Neuroscientists at CU Boulder have discovered that a specific type of brain cell could be a key player in making you feel the negative impacts of stress. END_OF_DOCUMENT_TOKEN_TO_BE_REPLACED

Protests in Iran have sent shockwaves through the country as thousands across the globe have joined in solidarity. Marie Ranjbar explains the history of women-led protests in Iran, what's different this time and what the global community can do to support women's bodily autonomy there. END_OF_DOCUMENT_TOKEN_TO_BE_REPLACED

Ye, the rapper and fashion designer formerly known as Kanye West, made headlines and topped social media feeds in recent weeks for his series of antisemitic comments. Thomas Pegelow Kaplan spoke with CU Boulder Today about what antisemitism means and how it’s perpetuated today. END_OF_DOCUMENT_TOKEN_TO_BE_REPLACED
Return to the top of the page