CU Boulder undergraduate Jamie Principato’s ambition is to conduct space experiments to glean data essential to our understanding the cosmos. A lofty goal for the astrophysics senior, but one she has been working toward for much of her life.

Principato designs instruments for use in particle astrophysics, which she particularly enjoys since it involves making tools that allow her to detect things that no one—including those with perfect eyesight—can see. For Principato, who has very limited vision, this is her superpower. 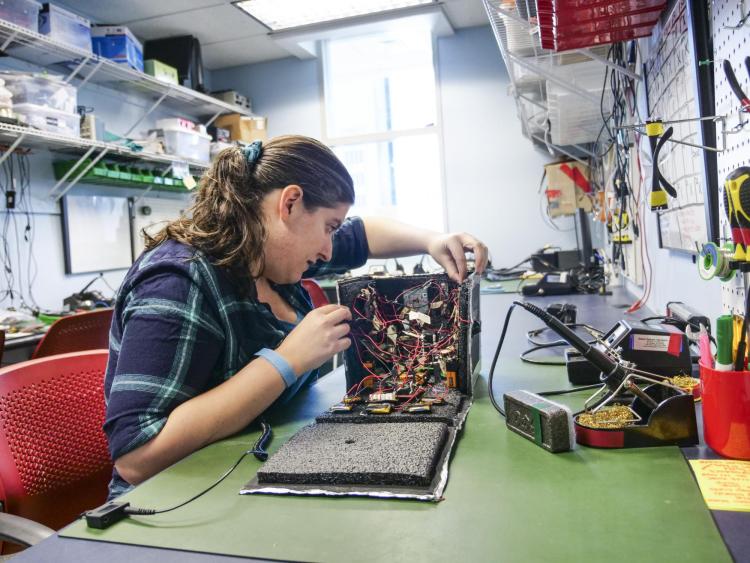 “There’s so much to be gained from space exploration,” she said. “I want to unlock knowledge that we can’t access because it’s too far away, we don’t have the technology to see it or it’s too dangerous and volatile to send humans.”

Last December, she organized Project Chimera, an undergraduate-driven particle astrophysics research group. Since then, she’s led a group of 30 students from physics, astrophysics, engineering physics and computer science with a strong interest in conducting research, but who have had little to no experience yet.

Chimera team members have learned how to design circuits, solder, plan and execute preliminary experiments, write a scientific paper, perform data analysis, and many other hands-on skills not covered in classroom work alone.

The primary project was designing and building a space instrument that could measure cosmic radiation.

The detector is an unpretentious 10-inch cube-shaped cardboard box that houses a scintillator attached to photodiodes (light sensors). A scintillator is a material that emits light when it interacts with ionizing radiation (charged particles). When a charged particle from a cosmic ray hits the scintillator, it deposits some of its energy into the scintillating material, which then releases that energy in the form of light. It is designed so that the photodiodes can measure the intensity of that light when it is emitted from space.

“We detected many spikes in our photodiode readings during the two flights, and far, far fewer during the ground test,” she said, “which tells us with some reasonable certainty that our detector was successfully measuring cosmic rays when it flew in the stratosphere.”

Principato received funding for Project Chimera from the university’s Undergraduate Research Opportunities Program (UROP) and from COSGC, a NASA-funded initiative that gives students at Colorado institutions the opportunity to design, build and fly space instruments and experiments. UROP funds students who produce new knowledge and creative work, helping them explore their interests beyond the classroom and to have the opportunity to get hands-on experience.

“While working on this project, I had people tell me everything about it was wrong and that we’d never get any data. But we did,” Principato said. “Doing science is a creative process. The only way we can expand our understanding of space is by taking creative approaches.”

Her love of science began at an early age and was encouraged by her dad. She recalls a conversation with him when she was 6 years old about the twin paradox and relativity.

“That started a pattern where dad would talk about these weird things that you can really only learn about if you have access to space or to things that can move at relativistic speeds,” she said. “Systematically testing things is part of how I experience the world, whether it was building batteries out of fruit to learn which fruit powers a lightbulb the longest or trying to figure out how to cross a street safely without being able to see the traffic.”

Since high school, Principato has wanted to pursue a space science career. Filled with self-doubt about the level of her math skills, she settled on studying psychology at Florida State University rather than physics as she wanted. An opportunity to move to Colorado a couple of years later was a new beginning for Principato to take a chance and follow her dream.

She enrolled at Arapahoe Community College. While there, Principato participated in COSGC projects. Her first project was in 2014 when she served as the lead scientist on a high-altitude-balloon experiment to measure cosmic radiation.

After transferring to CU Boulder in 2011, Principato’s passion for student-driven research intensified. 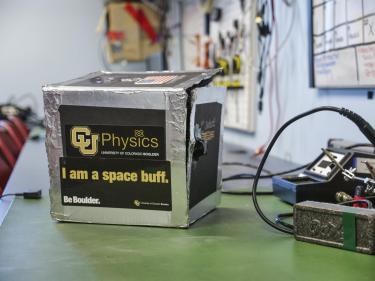 “Physics is the foundation for everything about our universe,” she said. “Physics is what brought me to CU.”

The next step for Project Chimera is further examining the data to determine whether she can obtain more information about the cosmic rays the device detected. That will help to inform future design changes and experiments that could improve the detector in order to provide more detailed and reliable data.

“The ideal goal would be to accurately measure the momentum and energy of the particles we detect so we could make inferences about what kind of particle it is,” she said. “And maybe even what kind of astronomical object or event produced it. But that is a long way off. This is only the beginning.”

Principato wants to recruit more students to the team who want to learn about particle astrophysics and instrument design and who want hands-on experience.

“This is a funded research project and everybody is welcome,” she said. 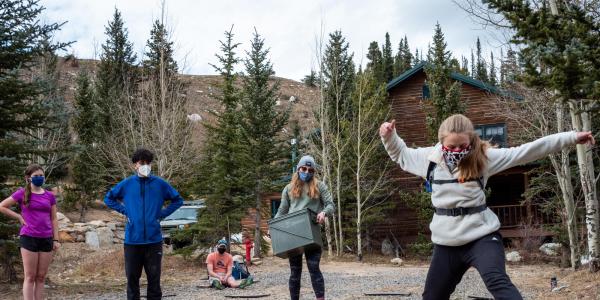 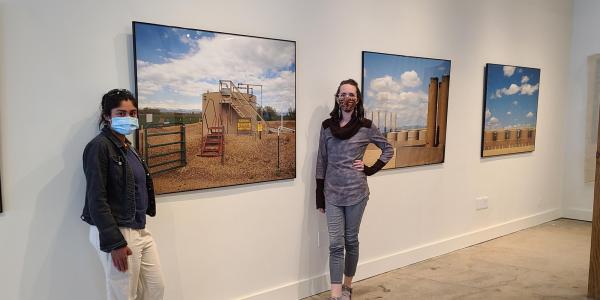 Wanting to better understand the contentious and complicated issues surrounding fracking in Colorado, two graduate students have collaborated to present their yearlong research in a visual exhibit. END_OF_DOCUMENT_TOKEN_TO_BE_REPLACED

With millions of students returning in the fall, college and university administrators across the country faced an unprecedented challenge this summer: Devise a plan for controlling an airborne virus, easily spread by people with no symptoms, in an environment where thousands of socially active young adults live in close quarters. END_OF_DOCUMENT_TOKEN_TO_BE_REPLACED
Return to the top of the page