A wrench in Earth's engine

Earth's mantle (dark red) lies below the crust (brown layer near the surface) and above the outer core (bright red). (Credit: CC image by Argonne National Laboratory via Flickr)

Researchers at CU Boulder report that they may have solved a geophysical mystery, pinning down the likely cause of a phenomenon that resembles a wrench in the engine of the planet.

In a study published today in Nature Geoscience, the team explored the physics of “stagnant slabs.” These geophysical oddities form when huge chunks of Earth’s oceanic plates are forced deep underground at the edges of certain continental plates. The chunks sink down into the planet’s interior for hundreds of miles until they suddenly—and for reasons scientists can’t explain—stop like a stalled car.

CU Boulder’s Wei Mao and Shijie Zhong, however, may have found the reason for that halt. Using computer simulations, the researchers examined a series of stagnant slabs in the Pacific Ocean near Japan and the Philippines. They discovered that these cold rocks seem to be sliding on a thin layer of weak material lying at the boundary of the planet’s upper and lower mantle—roughly 660 kilometers, or 410 miles, below the surface.

And the stoppage is likely temporary: “Although we see these slabs stagnate, they are a fairly recent phenomena, probably happening in the last 20 million years,” said Zhong, a co-author of the new study and a professor in CU Boulder’s Department of Physics. 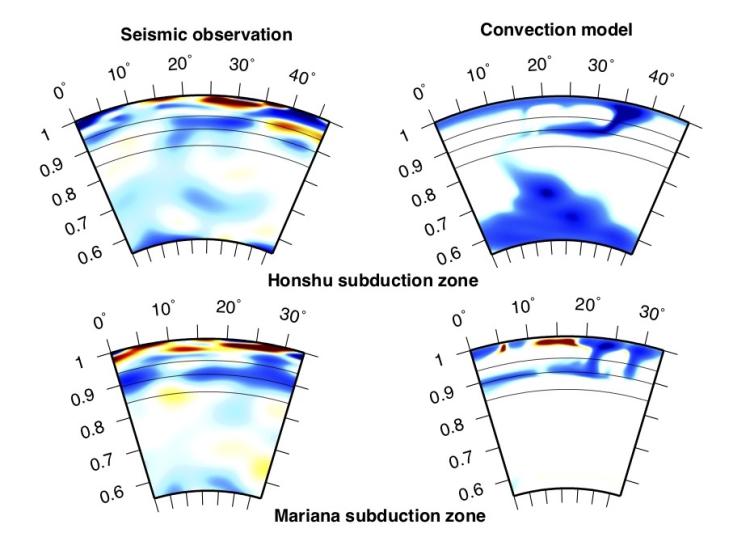 Graphic of stagnant slabs under the Japanese island of Honshu (top) and the Mariana Trench (bottom) using seismic data (left) and computer simulations (right). Stagnant slabs (blue) plunge down to the border between the upper and lower mantle then screech to a stop. (Credit: Mao & Zhong 2018, Nature Geoscience)

The findings matter for tectonics and volcanism on the Earth’s surface. Zhong explained that the planet’s mantle, which lies above the core, generates vast amounts of heat. To cool the globe down, hotter rocks rise up through the mantle and colder rocks sink.

“You can think of this mantle convection as a big engine that drives all of what we see on Earth’s surface: earthquakes, mountain building, plate tectonics, volcanos and even Earth’s magnetic field,” Zhong said.

The existence of stagnant slabs, which geophysicists first located about a decade ago, however, complicates that metaphor, suggesting that Earth’s engine may grind to a halt in some areas. That, in turn, may change how scientists think diverse features, such as East Asia’s roiling volcanos, form over geologic time.

Scientists have mostly located such slabs in the western Pacific Ocean, specifically off the east coast of Japan and deep below the Mariana Trench. They occur at the sites of subduction zones, or areas where oceanic plates at the surface of the planet plunge hundreds of miles below ground.

Slabs seen at similar sites near North and South America behave in ways that geophysicists might expect: They dive through Earth’s upper mantle and into the lower mantle where they heat up near the core.

But around Asia, “they simply don’t go down,” Zhong said. Instead, the slabs spread out horizontally near the boundary between the upper and lower mantle, a point at which heat and pressure inside Earth cause minerals to change from one phase to another.

To find out why slabs go stagnant, Zhong and Mao, a graduate student in physics, developed realistic simulations of how energy and rock cycle around the entire planet.

They found that the only way they could explain the behavior of the stagnant slabs was if a thin layer of less-viscous rock was wedged in between the two halves of the mantle. While no one has directly observed such a layer, researchers have predicted that it exists by studying the effects of heat and pressure on rock.

If it does, such a layer would act like a greasy puddle in the middle of the planet. “If you introduce a weak layer at that depth, somehow the reduced viscosity helps lubricate the region,” Zhong said. “The slabs get deflected and can keep going for a long distance horizontally.”

Stagnant slabs seem to occur off the coast of Asia, but not the Americas, because the movement of the continents above gives those chunks of rock more room to slide. Zhong, however, said that he doesn’t think the slabs will stay stuck. With enough time, he suspects that they will break through the slick part of the mantle and continue their plunge toward the planet’s core.

The planet, in other words, would still behave like an engine—just with a few sticky spots. “New research suggests that the story may be more complicated than we previously thought,” Zhong said.

CU Boulder neuroscientist Zoe Donaldson has found a new way to contribute to global science education. She and her team will spend much of August helping European high school students learn the finer points of gene manipulation in prairie voles. END_OF_DOCUMENT_TOKEN_TO_BE_REPLACED

Doctoral students Aaquib Tabrez and Matthew Luebbers, along with their advisor Bradley Hayes, used augmented reality Minesweeper to gain insight into a robot’s decision-making process. They were awarded runner-up for best student paper at an international conference. END_OF_DOCUMENT_TOKEN_TO_BE_REPLACED

With a project called Tinycade, graduate student Peter Gyory has set out to recreate that arcade parlor experience from childhood—entirely out of junk. END_OF_DOCUMENT_TOKEN_TO_BE_REPLACED
Return to the top of the page