Dark side of the moon holds clues to early universe 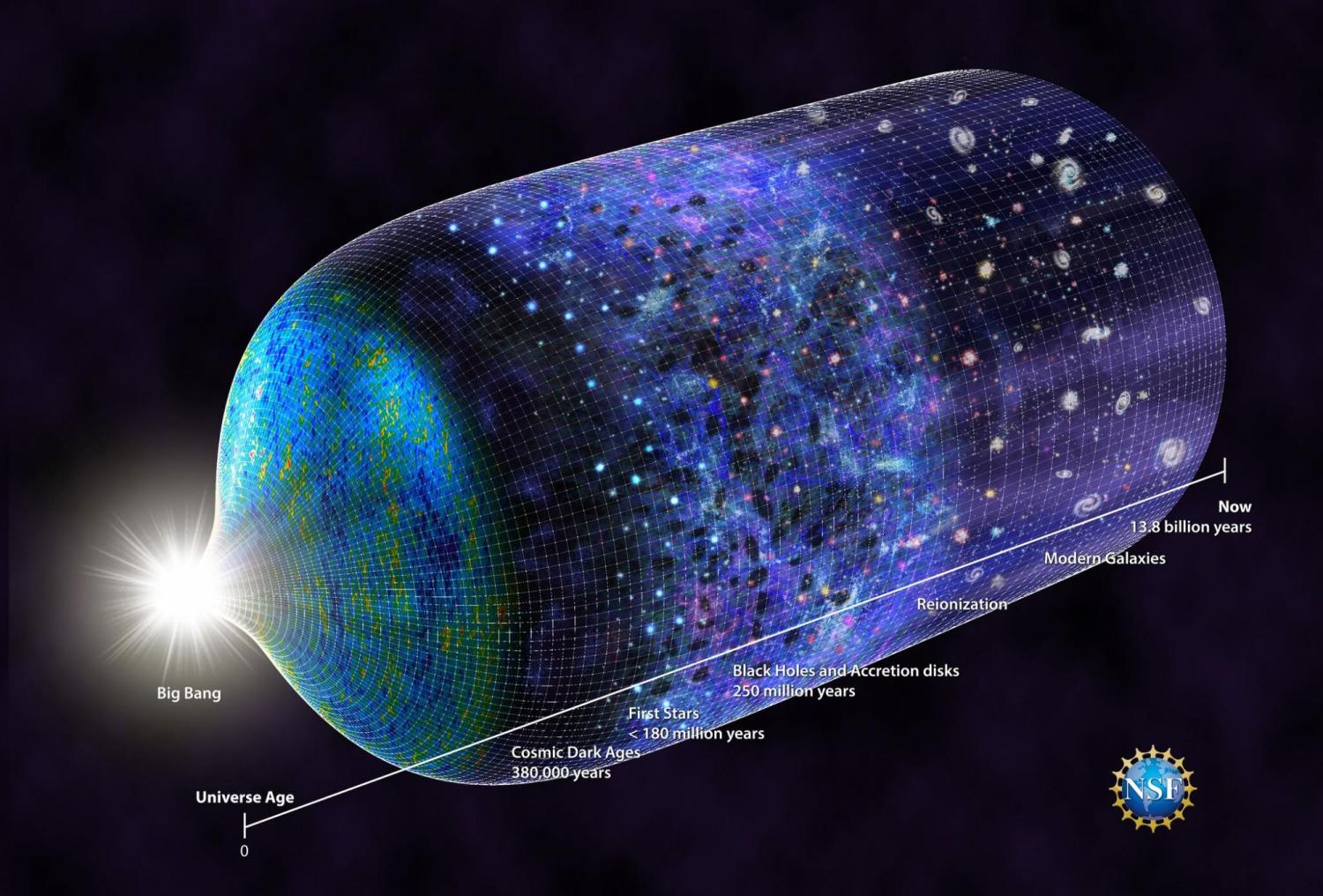 In this timeline of the universe, the cosmic dark ages began roughly 380,000 years after the Big Bang and ended tens of millions of years later when the first stars began to form. (Credit: N.R. Fuller, National Science Foundation)

The far side of the moon could give CU Boulder researchers an unprecedented look back at the early “dark ages” of the universe before the first stars had begun to flare into existence.

NASA recently picked the Dark Ages Polarimetry Pathfinder (DAPPER) as one of nine small satellite missions that it will study for a potential launch next decade. The DAPPER team, which is led by CU Boulder astrophysicist Jack Burns and includes scientists at the University of California, Berkeley, the National Radio Astronomy Observatory and NASA’s Ames Research Center, will spend the next six months crafting a detailed design of this proposed mission.

The goal is to put a satellite in orbit around the moon and, from the isolated environment of the lunar far side, observe signals from clouds of hydrogen gas in the early cosmos. 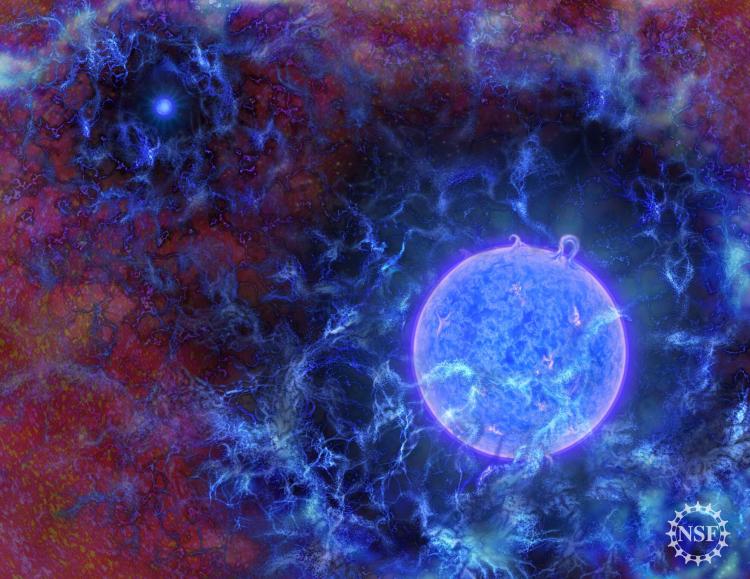 A 2018 study discovered a possible signal from the universe's first stars, which would have been blue and much bigger than stars today. (Credit: N.R. Fuller, National Science Foundation)

If greenlighted, the mission would allow astrophysicists to unwind the universe’s clock, revealing new information about how stars, galaxies and black holes came into being. Burns said that DAPPER could also mark a new step in lunar exploration, transforming the moon into a laboratory for far-reaching science.

“By using a combination of this hydrogen signal and the very quiet environment of the lunar far side, we can probe the dark ages of the universe for the first time,” said Burns, a professor in the Department of Astrophysical and Planetary Sciences.

DAPPER, which would be cheaper to build and more compact than a full-scale NASA mission, would seek out the fingerprints of an era in the cosmos just 15 million years after the Big Bang. At the time, no light sources of any kind existed in the universe.

Those same clouds of hydrogen gas, however, wouldn’t be invisible. Theorists suggest that they likely emitted electromagnetic radiation that astrophysicists will be able to see today in radio waves.

In early 2018, another research team reported that it may have detected a similar signal from later on in the cosmos’ evolution, roughly 180 million years after the Big Bang.

The moon is the only place near Earth where scientists could carry out a scientific study like DAPPER, Burns said. Signals from the early universe can be blocked by Earth’s atmosphere or drowned out by other radio waves, such as FM radio broadcasts. The far side of the moon, in contrast, is the most radio silent places in the inner solar system, Burns said.

“One of the nice things about going into space is that we’re able to eliminate most of that inference,” he said.

Forward to the Moon

The proposal comes as nations and companies around the world are setting their sights on traveling to the moon—using technology and instruments much more advanced than those of the Apollo era.

Burns said that DAPPER would piggy-back off of that surging interest in sending humans to lunar soil. His team proposed launching their small satellite from the Lunar Gateway, a space station that NASA and other international partners plan to orbit around the moon over the next decade.

The potential for such a mission is huge. By exploring this early period in the universe’s history, scientists could gain new insights into how the cosmos evolved. 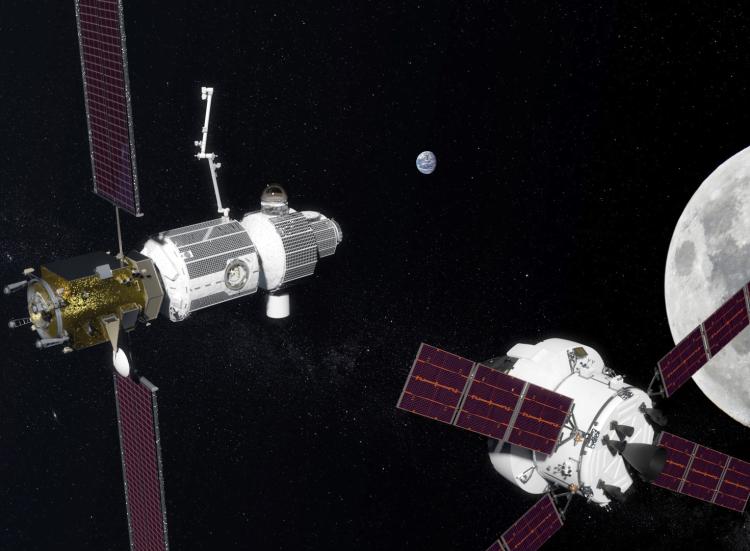 How, for example, did those primordial clouds of hydrogen gas eventually collapse to form all of the stars and galaxies that exist in the universe today?

Probing the cosmic dark ages could also provide astrophysicists with new hints about the nature of dark matter. This elusive substance makes up 85 percent of the mass of the galaxy, but has yet to be observed by scientists.

He hopes that DAPPER will one day inspire more scientists to launch scientific experiments on the moon that wouldn’t be possible from the surface of Earth. That might include research into how asteroids bombarded both the moon and the planet it orbits, potentially shaping the history of life on Earth.

“When I hear people say ‘been there done that’ for science on the Moon, I tell them ‘you are nuts,’” Burns said. “When it comes to the moon, we have only scraped the thinnest surface of what is possible.”

A first-of-its-kind sensor, developed by a team at the Laboratory for Atmospheric and Space Physics, will measure sunlight reflecting from Earth with more accuracy than any instrument in space or on the ground. END_OF_DOCUMENT_TOKEN_TO_BE_REPLACED

Ahead of the historic space mission, crew members joined CU Boulder researchers Allie Anderson and Torin Clark to talk about how the eye changes in space, experiencing "space motion sickness" and more. END_OF_DOCUMENT_TOKEN_TO_BE_REPLACED

NASA’s Orion spacecraft blasted off this morning from Florida in the first stage of its 25-day journey to circle the moon and return to Earth. Two CU Boulder scientists talk about what lies in store for the space agency’s ambitious Artemis Program. END_OF_DOCUMENT_TOKEN_TO_BE_REPLACED
Return to the top of the page