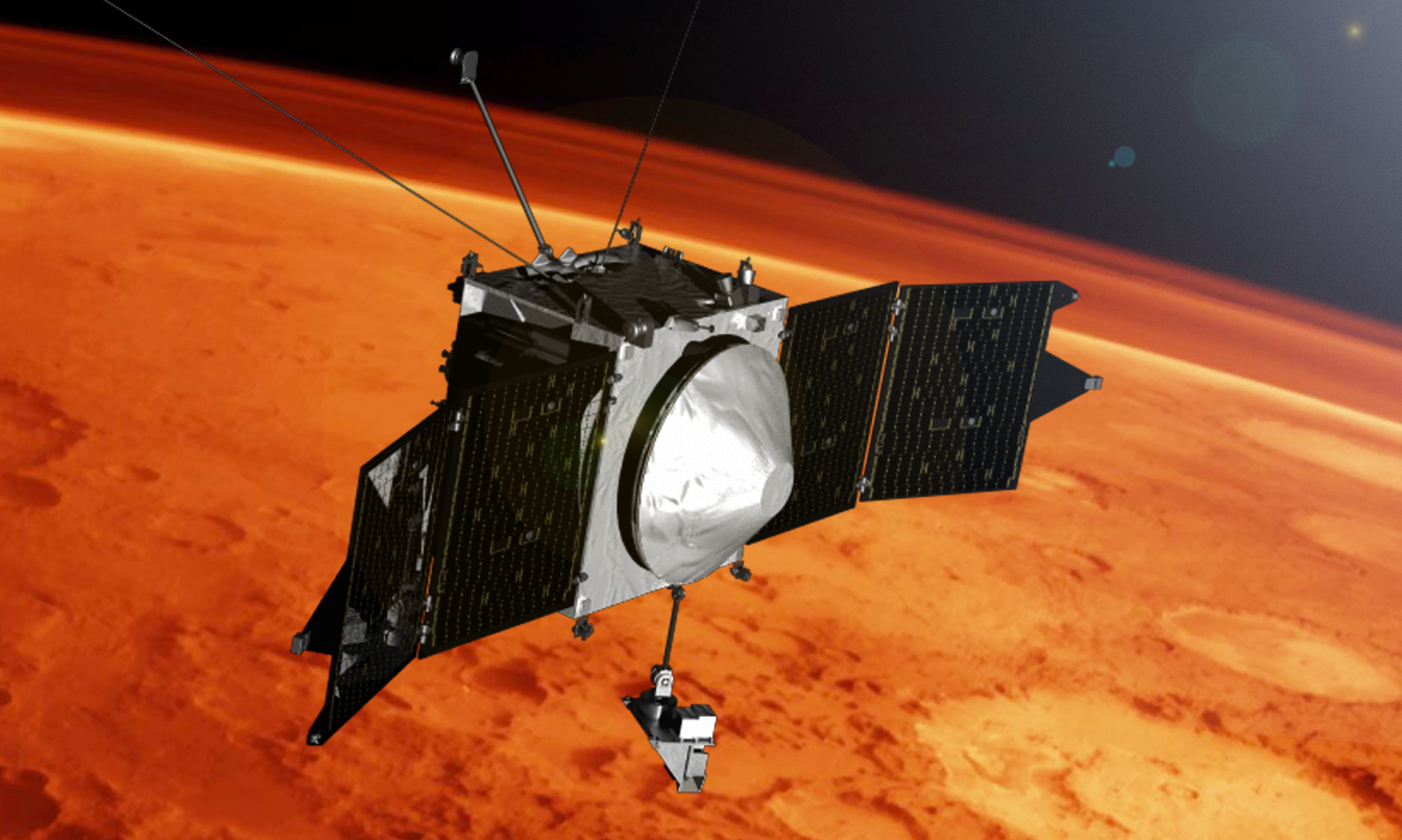 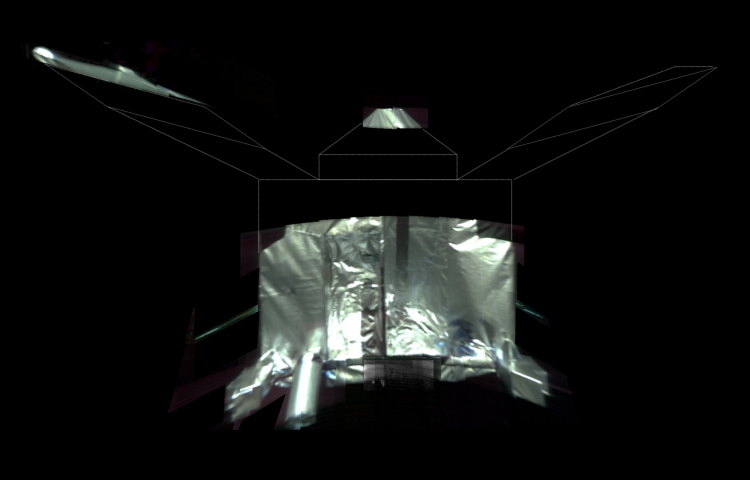 A composite "selfie" of the MAVEN spacecraft with lines indicating parts of the satellite that were out of the IUVS instrument's range. (Credit: CU Boulder-LASP/NASA)

Today, NASA’s Mars Atmosphere and Volatile Evolution (MAVEN) spacecraft celebrates four years in orbit studying the upper atmosphere of the Red Planet and how it interacts with the sun and the solar wind. To mark the occasion, the MAVEN team has released a selfie image of the spacecraft at Mars.

“MAVEN has been a tremendous success,” said Bruce Jakosky, principal investigator on the MAVEN mission and a professor at CU Boulder’s Laboratory for Atmospheric and Space Physics (LASP). “The spacecraft and instruments continue to operate as planned, and we’re looking forward to further exploration of the Martian upper atmosphere and its influence on climate.”

MAVEN’s selfie was made by looking at ultraviolet wavelengths of sunlight reflected off of components of the spacecraft. The image was obtained with the Imaging Ultraviolet Spectrograph (IUVS) instrument, which was built at LASP and normally looks at ultraviolet emissions from the Martian upper atmosphere.

The IUVS instrument is mounted on a platform at the end of a 1.2-meter boom (its own “selfie stick”), and by rotating, the boom can look back at the spacecraft. The selfie was made from 21 different images, obtained with the IUVS in different orientations, that have been stitched together.

“We never expected MAVEN to be able to take its own picture this way, but MAVEN has already surprised us many times with its outstanding performance at Mars,” said Nick Schneider, a professor in LASP and lead scientist for the IUVS instrument. “We think this is the first ultraviolet selfie taken by a spacecraft."

The MAVEN team in LASP includes researchers and students at both the graduate and undergraduate level. MAVEN has been streaming data back to Earth since the spacecraft went into orbit around Mars on Sept. 14, 2014. LASP provided two instruments for MAVEN and leads science operations and education and outreach for the mission.

During its time at Mars, MAVEN has made the following discoveries and science results, among others:

One of 21 images that MAVEN snapped of itself in orbit around Mars. (Credit: CU Boulder-LASP/NASA)

Next year, engineers will initiate an aerobraking maneuver by skimming the spacecraft through Mars’ upper atmosphere to slow it down. This will reduce the highest altitude in MAVEN’s orbit to enhance its ability to serve as a communications relay for data from rovers on the surface. Currently, MAVEN carries out about one relay pass per week with one of the rovers. This number will increase after NASA’s InSight mission lands on Mars in November.

MAVEN completed its primary mission in November 2015 and has been operating in an extended mission since that time, continuing its productive investigation of Mars’ upper atmosphere and exploring additional opportunities for science that the new relay orbit will bring.

Read the original story from NASA

A first-of-its-kind sensor, developed by a team at the Laboratory for Atmospheric and Space Physics, will measure sunlight reflecting from Earth with more accuracy than any instrument in space or on the ground. END_OF_DOCUMENT_TOKEN_TO_BE_REPLACED

Ahead of the historic space mission, crew members joined CU Boulder researchers Allie Anderson and Torin Clark to talk about how the eye changes in space, experiencing "space motion sickness" and more. END_OF_DOCUMENT_TOKEN_TO_BE_REPLACED

NASA’s Orion spacecraft blasted off this morning from Florida in the first stage of its 25-day journey to circle the moon and return to Earth. Two CU Boulder scientists talk about what lies in store for the space agency’s ambitious Artemis Program. END_OF_DOCUMENT_TOKEN_TO_BE_REPLACED
Return to the top of the page