The unexpected upside of E. coli

Best known as a pathogen that causes food poisoning or steals nutrients away from its host, the E. coli bacterium actually plays a critical role in promoting health by producing a compound that helps cells take up iron, new CU Boulder research shows.

The study, published today in the journal Cell, sheds new light on the mechanism by which E. coli—which is highly prevalent in the human gut—benefits its host and could ultimately lead to more effective therapies for iron deficiency anemia, which impacts more than 1 billion people worldwide.

“In recent years, we have begun to realize that many microorganisms populating the human gastrointestinal tract are good for us, but we are only beginning to discover exactly what benefits they offer and how,” said senior author Min Han, a professor in CU Boulder’s Department of Molecular, Cellular and Developmental Biology (MCDB). “This new finding identifies one key role of E. coli and that is to help cells absorb iron.”

While some strains of E. coli can cause illness, most are harmless and the human gastrointestinal tract is crawling with them.

Because E. coli is so prevalent, Han and his colleague Bin Qi, a research associate in his lab, presumed it played beneficial roles and set out to identify which compounds it produces and their functions.

They started with a series of experiments using C. elegans, a roundworm naturally rich in E. coli. When young worms were fed E. coli genetically altered to lack the ability to produce a compound called enterobactin, they grew slowly and their iron levels were low. When enterobactin was re-introduced into the worms, natural growth resumed and iron levels rose.

Subsequent experiments in worms and human cells showed that supplementing the diet with enterobactin, even without the addition of iron, prominently boosted iron levels in cells. 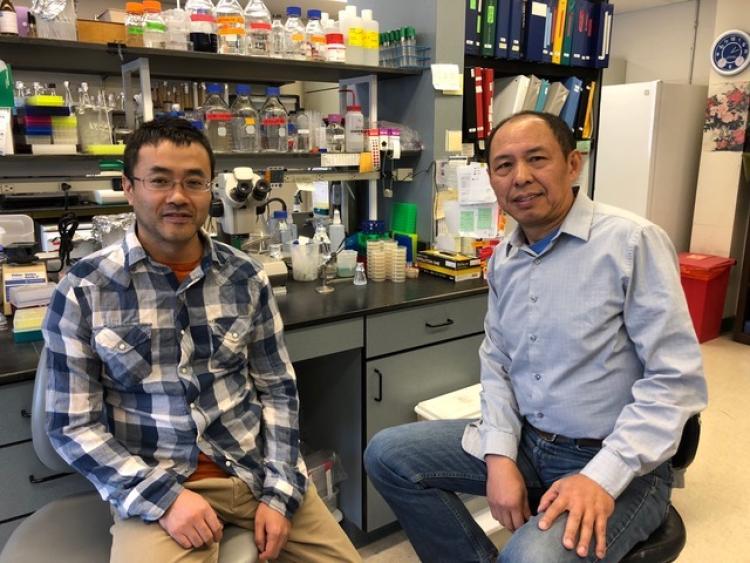 Scientists have long known that E. coli produces enterobactin to scavenge iron for its own survival and propagation. But they presumed that in doing so, it stole iron from its host in what is often referred to as an “iron tug of war.”

The new study challenges that paradigm, suggesting that enterobactin also binds to a protein called ATP synthase inside the host’s mitochondria, drawing iron into the host’s cells too.

“While bacteria make this iron-scavenging compound for their own use, our research suggests that mammals—including humans—have learned over time to hijack it for their own benefit,” said Han.

Iron deficiency is the most prevalent nutrient-deficiency disorder in the world and a major cause of anemia that impacts one-fourth of the global population, particularly women, children and people in underdeveloped countries.

But Han notes that oral iron supplements, while helpful in some cases, can potentially backfire by suppressing enterobactin production and reducing iron absorption. Oral antibiotics could potentially have the same impact, he says.

Han has filed for a patent for the breakthrough and plans to continue developing new therapeutics that could serve as adjuncts to or replacements for iron supplements.

“Ultimately, we believe this molecule has great potential for addressing iron deficiency disorders, which are so prevalent,” he said. “Studies like ours demonstrate just how host animals are benefiting from the activities of the huge number of microbes in their gut.”

A new genetic analysis, using data from hundreds of thousands of people, sheds light on why more than half of people diagnosed with one psychiatric disorder will be diagnosed with a second or third in their lifetime. END_OF_DOCUMENT_TOKEN_TO_BE_REPLACED

In the wake of this week's leak about a private Supreme Court vote to strike down Roe v. Wade, CU Boulder sociologist Amanda Stevenson discusses how such a ruling could impact women's mortality and the way they live their lives. END_OF_DOCUMENT_TOKEN_TO_BE_REPLACED
Return to the top of the page