Here comes the sun: New spacecraft to fly closer than ever before

On August 11, CU Boulder’s David Malaspina will have a front-row seat for the launch of NASA’s newest mission, the Parker Solar Probe.

The event, which is scheduled to take place at Cape Canaveral Air Force Station in Florida, will be a must-see for scientists who have spent their careers watching the sun. Over its 7-year mission, the Parker Solar Probe will fly closer to that star than any spacecraft in history, dipping to within 4 million miles of the surface and grazing the sun’s outer atmosphere, or corona.

“It’s an unexplored region of space,” said Malaspina, a research scientist at the Laboratory for Atmospheric and Space Physics (LASP). “No spacecraft has ever been there.”

Malaspina is part of a team of researchers and engineers at LASP who are working on the FIELDS Experiment, one of four suites of instruments that will ride onboard Parker Solar Probe. Among other questions, the experiment will explore how the sun’s corona drives solar winds, or charged particles that flow into the solar system, and bursts of other energetic particles. These processes play an important role in space weather, which can damage satellites orbiting Earth.

When it comes to understanding the sun, “all we really have to go on from Earth is the light,” Malaspina said. “How do you connect what you observe using light with the properties of the material the sun is blowing off? That’s where Solar Probe comes in.” 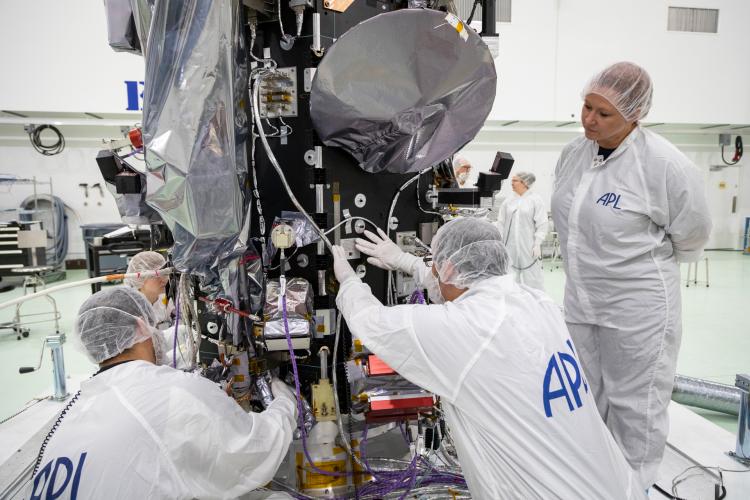 Getting there, however, won’t be easy. Over its lifetime, the Parker Solar Probe will circle the sun 24 times, using Venus’ gravity to nudge its orbit closer and closer to the corona. In the process, the spacecraft will encounter temperatures of up to 2,500 degrees Fahrenheit and will hit top speeds of more than 400,000 miles per hour.

“This is one of the riskiest missions that NASA has done in decades,” said Robert Ergun, a professor in CU Boulder’s Department of Astrophysical and Planetary Sciences and a co-investigator on the FIELDS Experiment.

Risky but worth it, the researchers say. That’s because the probe may be able to answer a series of questions that have puzzled scientists for decades: How does the sun launch solar winds at speeds of 1 million miles per hour or more? And why is the corona, which can reach temperatures of 1 million degrees Fahrenheit, so much hotter than the surface of the sun, which clocks in at a paltry 10,500 degrees?

The answers to those questions, in part, lie in turbulence. Ergun compares the sun’s corona to the churning liquid at the bottom of a waterfall. Near the sun, streams of plasma, or gases made up of charged particles, flow in all directions, creating a chaotic and violent environment. The FIELDS Experiment will get a close-up look at that turbulence, examining how it spreads energy from the corona into the solar wind.

“To really understand the nature of turbulence, you have to get into it,” said Ergun, also of LASP. “You can’t sample a river downstream and say whether the water has gone through a waterfall or not.”

The University of California, Berkeley is leading the FIELDS experiment and the Johns Hopkins University Applied Physics Laboratory (APL) is managing the overall Parker Solar Probe mission along with NASA.

“I’m really excited,” Ergun said. “This is a really nice, beautiful mission for astrophysicists and NASA.”

The FIELDS Experiment will study a wide range of electric and magnetic fields near the sun. The LASP team’s main focus will be on measuring those fields at low frequencies.

It’s easier said than done, Malaspina explained. That’s because the FIELDS experiment will collect over 10,000 times more data than the Parker Solar Probe can reasonably store and send back to Earth. To get around that limitation, he and his colleagues have developed an electronics board for the experiment that will automatically scan through data as it comes in—deciding what information to save and what to ignore.

With so much riding on the mission, Malaspina said his feelings about the upcoming launch, in which the Parker Solar Probe will blast off onboard a United Launch Alliance Delta IV Heavy rocket, are a mix of eagerness and nerves. But the real white-knuckle moment will come two days after the launch when he travels to Baltimore. There, the mission operations team at APL will begin switching on the Parker Solar Probe’s instruments one by one.

“As many times as you test something in the lab, the final test is whether it works in orbit,” Malaspina said.

Ahead of the historic space mission, crew members joined CU Boulder researchers Allie Anderson and Torin Clark to talk about how the eye changes in space, experiencing "space motion sickness" and more. END_OF_DOCUMENT_TOKEN_TO_BE_REPLACED

NASA’s Orion spacecraft blasted off this morning from Florida in the first stage of its 25-day journey to circle the moon and return to Earth. Two CU Boulder scientists talk about what lies in store for the space agency’s ambitious Artemis Program. END_OF_DOCUMENT_TOKEN_TO_BE_REPLACED

CU Boulder geologist Lisa Mayhew serves on the science team for NASA’s Perseverance rover, an intrepid machine that has crossed over nearly 8 miles of the surface of Mars—and is helping to recreate the forces that shaped this planet into what it looks like today. END_OF_DOCUMENT_TOKEN_TO_BE_REPLACED
Return to the top of the page