Artist's imagining of the atom chip, designed by CU Boulder's Dana Anderson and colleagues, at the heart of the Cold Atom Laboratory on the International Space Station. (Credit: NASA)

New experiments based on Nobel Prize-winning science pioneered at CU Boulder and the National Institute for Standards and Technology (NIST) made their space station debut this week.

In July, scientists at NASA’s Jet Propulsion Laboratory reported that they had successfully created a Bose-Einstein Condensate onboard the International Space Station. Eric Cornell and Carl Wieman of JILA, a joint institute of CU Boulder and NIST, earned the Nobel Prize in Physics in 2001 for first taming this peculiar state of matter. They discovered that at ultracold temperatures clouds of atoms could behave as a single quantum mechanical entity.

The announcement was a major step for the Cold Atom Laboratory, a freezer-sized science facility spearheaded by NASA that shipped to the International Space Station in May 2018.

CU Boulder played a major role in making it happen, said Dana Anderson, a Professor in the Department of Physics. His team designed the “atom chip” that is critical to the workings of the chilly lab. Anderson said that this far-out research is a case of CU Boulder science coming full circle.

“We’re thrilled. Sooner or later, the things you see coming out of JILA are going to change the world,” said Anderson, who is also a JILA Fellow. 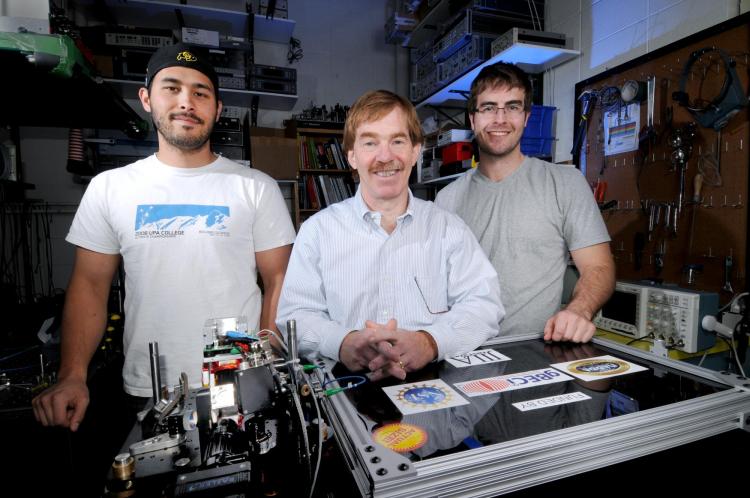 The journey began in 1995 when Wieman, now at Stanford University, and Cornell first used lasers and magnetic fields to cool a cloud of rubidium atoms to a fraction of a degree above absolute zero. At such frigid temperatures, atoms behave in unusual ways, Anderson explained. Rather than each one vibrating on its own, the atoms “essentially talk to each other,” he said. “They start acting in concert.”

More than 20 years later, scientists have proposed a number of uses for such quantum Jello. They include super-accurate sensors that may help spacecraft to navigate and satellites that communicate using quantum signals. But Bose-Einstein Condensates are also notoriously difficult to observe on Earth. They’re so sensitive that even small disruptions, such as from the tug of gravity, can cause them to fall apart.

In space, however, researchers can study this state of matter for much longer: Bose-Einstein Condensates crafted on the International Space Station can last for a record five to ten seconds. Getting to that point, however, meant shrinking a room’s worth of equipment down to a portable lab that could fit on a rocket.

That’s where the atom chip comes in. This device, which is about the size of a postage stamp, generates tight magnetic fields that allow scientists to more efficiently trap clouds of atoms.

Anderson has used such chips himself to develop new kinds of navigational tools like gyroscopes and accelerometers. The chip on the space station was designed in his lab and built by ColdQuanta, a Boulder-based company that Anderson founded in 2007.

“This research started here. We developed the technology and transferred it,” Anderson said. “You have a whole loop, and all of it is CU.”

In the next few months, Cornell and Peter Engels of Washington State University will lead a team using the Cold Atom Lab to explore Efimov molecules. These molecules are made up of three or more atoms joined together in a delicate balance—take away one of the atoms, and the rest will break apart, explained Jose D’Incao, an assistant research professor at CU Boulder and a senior research associate at JILA.

What’s really weird about Efimov molecules, however, is that unlike traditional molecules like H2O, their atoms don't need to be close to each other to bind.

“If you pull the atoms apart, they can feel interactions with each other even to an infinite distance,” said D’Incao. He performs theoretical research related to the Cornell and Engels experiment and others at the Cold Atom Lab.

Scientists on Earth face difficulties creating Efimov molecules, even at the smallest distances apart possible. But the lack of gravity on the space station will allow the researchers to make the next jump up—controlling three potassium atoms bound together over a distance as wide as a virus. That may not sound big, said D’Incao, but in the quantum world, it’s humungous.

He added that the experiment is exciting because the researchers don’t know what they will find by learning how to efficiently create such molecules. They might, for example, discover how to access new states of matter that theorists have yet to understand.

“The overall theme with this research on ultracold atoms is control,” D’Incao said. “You want to have control over matter on the quantum level, and then you can tune the parameters and, bam, you can get something very unusual.”

The historic spacecraft soon hit Earth's atmosphere flying at speeds of almost 25,000 mph. CU Boulder aerospace engineer Iain Boyd breaks down what will happen to the capsule, and how NASA will keep it safe on reentry. END_OF_DOCUMENT_TOKEN_TO_BE_REPLACED

A first-of-its-kind sensor, developed by a team at the Laboratory for Atmospheric and Space Physics, will measure sunlight reflecting from Earth with more accuracy than any instrument in space or on the ground. END_OF_DOCUMENT_TOKEN_TO_BE_REPLACED

Ahead of the historic space mission, crew members joined CU Boulder researchers Allie Anderson and Torin Clark to talk about how the eye changes in space, experiencing "space motion sickness" and more. END_OF_DOCUMENT_TOKEN_TO_BE_REPLACED
Return to the top of the page