Rachael Kaspar used to be scared of bees. That was before she studied their behavior as an undergraduate at CU Boulder. Since learning their secret lives and social behaviors, she has developed an appreciation for the complex, hard-working bees. 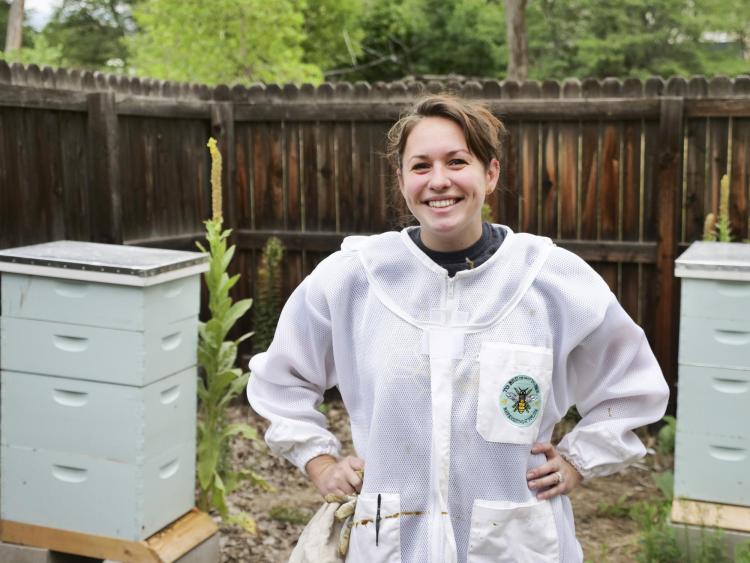 Kaspar graduated in 2016 with a bachelor’s degree in ecology and evolutionary biology, and in environmental studies with a minor in atmospheric and oceanic sciences. While a sophomore, she joined the lab of ecology and evolutionary biology professor Michael Breed to work with then-doctoral student Chelsea Cook and became interested in organized behavior and responses to environmental stress.

She is the lead author of a scientific article in Animal Behaviour based on her undergraduate honors thesis about honeybee behavior, which shows experienced fanner honey bees influence younger, inexperienced bees to fan their colony to cool it down. Her study tested the hypothesis that an individual bee can influence group members to perform thermoregulatory fanning behavior in the western honey bee, Apis mellifera L.

Building upon this behavior is Kaspar’s finding that shows young nurse bees are influenced by seeing older, more experienced worker bees fanning their wings—also known as fanners. The younger nurse bees then join in to help regulate the hive’s temperature. The fanners influenced the nurses’ thermal response threshold and probability to fan, but most notably, fanners had the greatest influence when they were the initiators—the first to fan in the group.

“The older workers are definitely influencing the younger nurse bees,” Kaspar said. “I was interested in how different age groups socially interacted, what are the variances between age groups and how are they interacting to have a proper homeostatic response to environmental stressors.”

In the paper, she states that the survival of an animal society depends on how individual interactions influence group coordination. Interactions within a group determine coordinated responses to environmental changes. This behavior is exemplified by honeybee worker responses to increasing ambient temperatures by fanning their wings to circulate air through the hive. Their previous research demonstrated that groups of workers are more likely to fan than isolated workers, which suggests a coordinated group response.

Hive temperatures that exceed 96.8 degrees Fahrenheit put larvae at risk of death or developing abnormalities. This is just one reason why it is crucial that individual bees have a coordinated group fanning response to properly regulate the temperature of the hive.

Honeybees divide their tasks among female age groups. Nurses, who are between zero and 10 days old, take care of the larvae and the brood. Middle-aged worker bees, who are 10 to 20 days old, can be found on the front porch, as well as on the inside of the hive guarding and cleaning the hive, and fanning to cool the hive. The more outwardly visible bees are the foragers, which are 20–30 days old and fly from flower to flower collecting nectar and pollen.

Researchers marked bees with water-soluble paint to identify them in the hive. When researchers warmed groups of bees, they would observe the bees’ fanning behavior and record the temperature at which individuals and groups began to fan.

“When I was down there with my face right in front of the hive, I could feel the air moving from their wings fanning,” she said.

This social and influential behavior, Kaspar says, can be seen in a variety of organisms throughout the biological index, from elephants to chimpanzees to fish. And perhaps not surprisingly, in humans as well.

“You would think that bees as insects wouldn’t have the capability to learn, remember or have these social influences. But, in fact, they do. Bees are a great model to use for studying other societies, like us.”

Kaspar got the idea of an influencer or an initiator of hive behavior when she observed human behavior unfolding at a cross walk on campus. A group of people were waiting for the light to change so they could cross. Too impatient to wait, one person strode across the street. A second or two later, the rest of the pedestrians crossed too, influenced by the behavior of the first person to cross against the light. 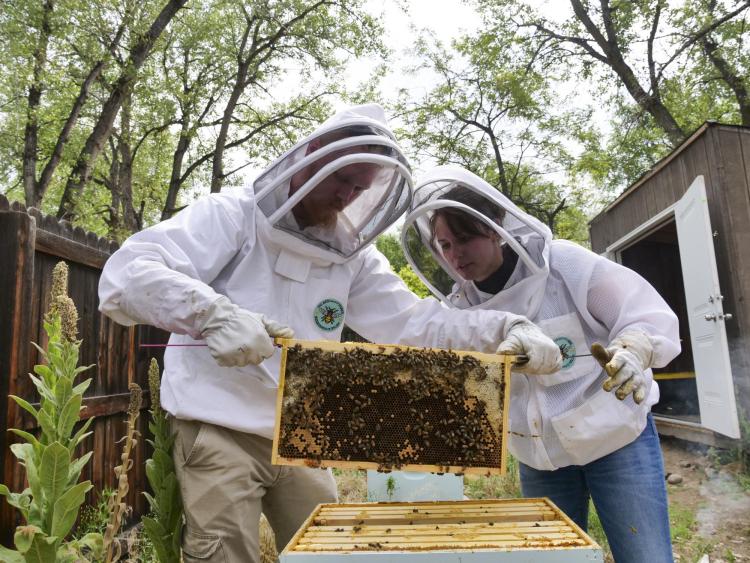 “When I saw that I was shocked,” she said. “This is exactly what I was studying in honeybees and there I was seeing it in people on campus.”

Kaspar is a professional research assistant in the Department of Anesthesiology at the CU Anschutz Medical Campus. She is working in Eric Clambey’s laboratory, where they are identifying unique cell phenotypes and interactions in human lungs and the gastrointestinal tract to better understand the effect of micro-environments on viruses and inflammation. Her goal is to start graduate school in 2020 and continue her studies into how organisms come together to improve their chances of survival.

“I love bees, though,” she said. “I would very much like to continue studying honeybees in some way.”

This research was co-authored by Chelsea Cook, now a post-doctoral researcher at Arizona State University, as well as Michael Breed of the Department of Ecology and Evolutionary Biology at CU Boulder.

The article can be read here at no charge until Aug. 29.

With millions of students returning in the fall, college and university administrators across the country faced an unprecedented challenge this summer: Devise a plan for controlling an airborne virus, easily spread by people with no symptoms, in an environment where thousands of socially active young adults live in close quarters. END_OF_DOCUMENT_TOKEN_TO_BE_REPLACED

A blood test for your body clock? It’s on the horizon

CU Boulder sleep researchers have found it's possible to determine the timing of a person's internal biological clock via a single blood draw. Ultimately, the findings could lead to personalized recommendations for when people should eat, sleep, exercise and take medications. END_OF_DOCUMENT_TOKEN_TO_BE_REPLACED

As delta variant threatens Colorado, vaccines can stop its spread

A new variant of the virus that causes COVID-19 is now behind nearly 90% of the cases in the state. Researchers from CU Boulder talk about this new player in the pandemic and whether vaccinated people should continue to wear masks in public. END_OF_DOCUMENT_TOKEN_TO_BE_REPLACED
Return to the top of the page