Researchers peer inside cells to spy on cancer's on-off switch

Forty years after researchers first discovered it in fruit flies, a once-obscure cluster of proteins called PRC2 has become a key target for new cancer-fighting drugs, due to its tendency—when mutated—to bind to and silence tumor suppressing genes.

New CU Boulder research published today uses state-of-the art imaging to offer an unprecedented look at the complex, illuminating how it finds its way to genes, what happens when it gets there and how a new generation of cancer therapeutics might disrupt the process.

The findings, published in the journal Genes and Development, also shed new light on just how epigenetic changes—the switching on or off of genes—happen inside the cell.

“Many cancers make use of epigenetic gene silencing to promote their own growth. Medical scientists want to inhibit this cancer-causing process, but they first need to know exactly how it works,” said Nobel Laureate and Distinguished Professor Thomas Cech, senior author of the study. “Our new work contributes to the understanding of how the molecular machine responsible for gene silencing is recruited to its sites of action in human cells, determining which genes are turned off.” 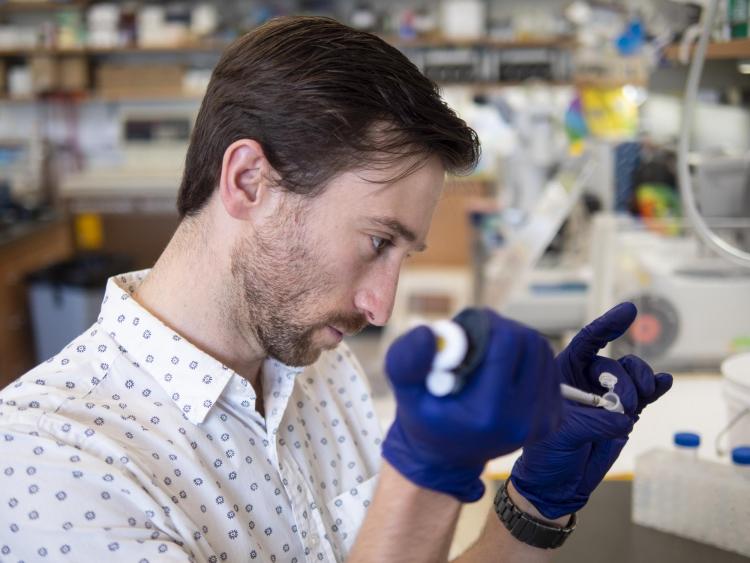 For the study, Cech and lead author Daniel Youmans, who is pursuing a PhD in biochemistry at CU Boulder and an MD at Anschutz Medical Center, used the gene-editing tool CRISPR to apply fluorescent tags to the individual proteins which make up PRC2, or Polycomb Repressive Complex 2.

Then, they used a high-tech microscope to observe what happens to the proteins inside living human cells, both under normal conditions and when exposed to a cancer drug called A-395, which is a PRC2 inhibitor.

“Our work helps define the mechanism of these cancer drugs and changes what we thought about the way PRC2 functions inside cells,” Youmans said.

PRC2 is made of a cluster of four core proteins, which interact with other proteins circulating in the cell. When they click together just right, like puzzle pieces, it signals the complex to make its way to certain genes in the cell, silencing them, said Youmans.

In a healthy cell, that silencing can influence whether a stem cell becomes a neuron or heart cell and shut off genes which could promote disease. But in many cancers, including lymphoma, the complex is hijacked to silence tumor suppressors.

Scientists previously thought that PRC2 cancer therapeutics worked by preventing the complex from binding to genes. But when watching it swirl around the cell, the researchers discovered that in the presence of the drug, the molecular silencing machine made it to its locations. Once there, it just failed to fully do its job.

They also identified specific auxiliary proteins which PRC2 must click to in order to be recruited to its target genes.

“We showed that when you disrupt the interaction between PRC2 and these other puzzle pieces, it completely disrupts its ability to bind to specific places,” said Youmans.

The findings suggest that existing PRC2 inhibitors, while effective, may be working in a different way than previously believed. They also open the door for development of new drugs, which could get at the same end goal by preventing PRC2 from binding to certain locations on genes altogether.

“Cancer is always mutating so it’s important to have a broad toolbox of therapeutic options,” said Youmans.

As a student in CU’s Medical Scientist Training Program, which enables medical students to simultaneously pursue a PhD, Youmans has a unique perspective on the possible applications of his research.

“I’m heartened by the idea that the work I do in the laboratory could ultimately help the patients I see in the hospital,” he said.

Jens Schmidt, who was a postdoctoral research fellow at the BioFrontiers Institute and is now an assistant professor at Michigan State University, contributed to this study.

New data shows that banning abortion would lead to more maternal deaths than previously thought, a critical finding less than a week after the Supreme Court ruled 5-4 to overturn Roe v. Wade. END_OF_DOCUMENT_TOKEN_TO_BE_REPLACED

On June 24, the Supreme Court released a decision in Dobbs v. Jackson Women’s Health Organization. The court also ruled to overturn the 1973 Roe v. Wade decision. Jennifer Hendricks, a professor at the University of Colorado Law School, addresses her interpretation of the rulings. END_OF_DOCUMENT_TOKEN_TO_BE_REPLACED

A recent survey shows more than 60% of Americans know “nothing at all” or only “a little bit” about what Juneteenth is or its importance in American history. Ashleigh Lawrence-Sanders, professor of African American and Black cultural history, discusses how and why we celebrate Juneteenth. END_OF_DOCUMENT_TOKEN_TO_BE_REPLACED
Return to the top of the page