What does it take to switch on a supermassive black hole? A new study by researchers at CU Boulder explores that question, finding that violent crashes may be more effective at activating black holes than more peaceful mergers.

When two galaxies collide, the supermassive black holes that sit at their centers also smash together. But before they do, those galaxies often flicker on, absorbing huge quantities of gas and dust and producing a fireworks-like display called an Active Galactic Nucleus (AGN), a type of quasar.

But not all mergers are created equal. In some such marriages, only one black hole becomes active, while in others, both do.

The research team led by CU Boulder’s Scott Barrows suggests a possible explanation: Single activations seem to occur more often in mergers in which the galaxies are mismatched—or when one galaxy is huge and the other puny. The reason may come down to the violence of the physics. 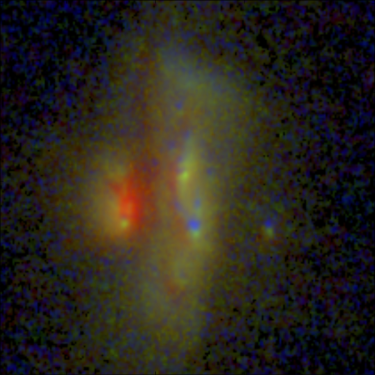 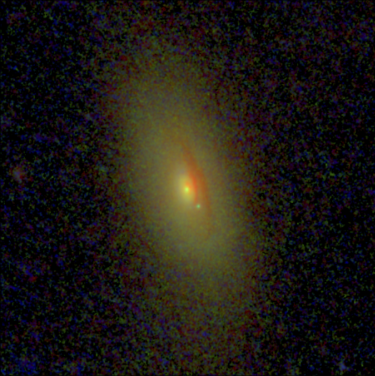 When lopsided galaxies join, “the merger is less violent, and that leads to less gas and dust falling onto the black holes,” said Barrows, a postdoctoral research associate in the Center for Astrophysics and Space Astronomy (CASA). “And the less material you have falling onto the black holes, the less likely you are to have two of them become AGNs.”

The researchers presented their findings today at a press briefing at the 232nd meeting of the American Astronomical Society, which runs from June 3-7 in Denver, Colorado. Julie Comerford, an assistant professor in CU Boulder’s Department of Astrophysical and Planetary Sciences and a keynote speaker at the conference, was a co-author on the study along with Jenny Greene of Princeton University.

Barrows explained that scientists have long wondered why supermassive black holes, which exist in the centers of almost all galaxies, tend to look like their hosts. Big galaxies hold big black holes and small galaxies host more petite ones.

“A big question in modern astronomy is what are the primary routes by which these black holes grow,” Barrows said. “One idea is that galactic mergers play a major role.”

When galaxies join together and combine their stars, their supermassive black holes also grow, consuming huge quantities of galactic material and spitting out hot jets of gas that can extend hundreds of thousands of lightyears into space. Such AGNs are among the brightest phenomena in the universe.

To examine these displays, Barrows and his colleagues developed a novel method for spotting merging galaxies. Previously, he said, scientists mostly went by sight.

“Somebody looks at a telescope image and says, ‘oh, that’s a merger,’” Barrows said.

His team, however, used data collected by the Chandra X-ray Observatory to systematically scan the night sky for the signatures of AGNs. They spotted mergers in progress by looking for “offset galaxies,” or galaxies with a single AGN that sits away from the center of the galaxy. Such a lack of symmetry suggests that a second supermassive black hole, which hasn’t been turned on, might be hiding nearby.

To figure out why a merger might switch on just one of these supermassive black holes, Barrows and his colleagues assembled a sample of 10 offset galaxies. They then compared that sample to galaxies with a pair of AGNs.

Barrows explained that when galaxies of roughly equal size meet, their black holes exert tremendous gravitational forces on each other. Those forces, in turn, send clouds of gas and dust raining onto the black holes.

“It’s these torques that extract energy from the gas and dust, allowing it to fall into the nucleus of the black hole,” Barrows said. In mismatched mergers, “you simply have smaller forces exerted on the gas and dust in each galaxy.”

The team didn’t find any rhyme or reason to which black hole activated during a mismatched merger. In some cases, Barrows said, it was the bigger black hole. In other cases, the smaller one. Next up, he and his colleagues will focus on how the smashing together of two black holes affects the galaxies themselves, including how they create and destroy stars.

A new NASA report shows that the University of Colorado Boulder is the top university recipient of NASA astrophysics technology grants. END_OF_DOCUMENT_TOKEN_TO_BE_REPLACED

CU Boulder has been selected as a member of the United States Space Command Academic Engagement Enterprise, a new national program designed to expand collaboration and academic exchanges between universities and Space Command. END_OF_DOCUMENT_TOKEN_TO_BE_REPLACED

Since July 2022, a miniature satellite about the size of a shoebox has been orbiting Earth and monitoring how much solar energy reaches the atmosphere, one of the "most important" Earth science measurements. Now, scientists are finalizing their analysis of the first five months of the testing. END_OF_DOCUMENT_TOKEN_TO_BE_REPLACED
Return to the top of the page