A new study shows that staying up all night can swiftly impact more than 100 proteins in the blood.

Pulling an all-nighter just once can disrupt levels and time of day patterns of more than 100 proteins in the blood, including those that influence blood sugar, energy metabolism, and immune function, according to new CU Boulder research published in the Proceedings of the National Academy of Sciences (PNAS) this week.

“This tells us that when we experience things like jet lag or a couple of nights of shift work, we very rapidly alter our normal physiology in a way that if sustained can be detrimental to our health,” said senior author Kenneth Wright, director of the Sleep and Chronobiology Laboratory and professor in the Department of Integrative Physiology.

The study is the first to examine how protein levels in human blood, also known as the plasma proteome, vary over a 24-hour period and how altered sleep and meal timing affects them.

It also pinpointed 30 distinct proteins that, regardless of sleep and meal timing, vary depending upon what time it is.

The findings could open the door for developing new treatments for night shift workers, who make up about 20 percent of the global workforce and are at higher risk for diabetes and cancer. It could also enable doctors to precisely time administration of drugs, vaccines and diagnostic tests around the circadian clock.

“If we know the proteins that the clock regulates, we can adjust timing of treatments to be in line with those proteins,” said lead author Christopher Depner, a postdoctoral researcher in the Department of Integrative Physiology.

The researchers recruited six healthy male subjects in their 20s to spend six days in the clinical translational research center at the University of Colorado Hospital, where their meals, sleep, activity and light exposure were tightly controlled.

On days one and two, the men stuck to a normal schedule. Then they were gradually transitioned to a simulated night-shift work pattern, in which they had the opportunity to sleep for eight hours during the day and stayed up all night, eating then.

Researchers drew blood every four hours and used technology recently developed by Boulder-based SomaLogic Inc to assess levels and time-of-day-patterns of 1,129 proteins. They found 129 proteins whose patterns were thrown off by the simulated night shift.

“By the second day of the misalignment we were already starting to see proteins that normally peak during the day peaking at night and vice versa,” Depner said. 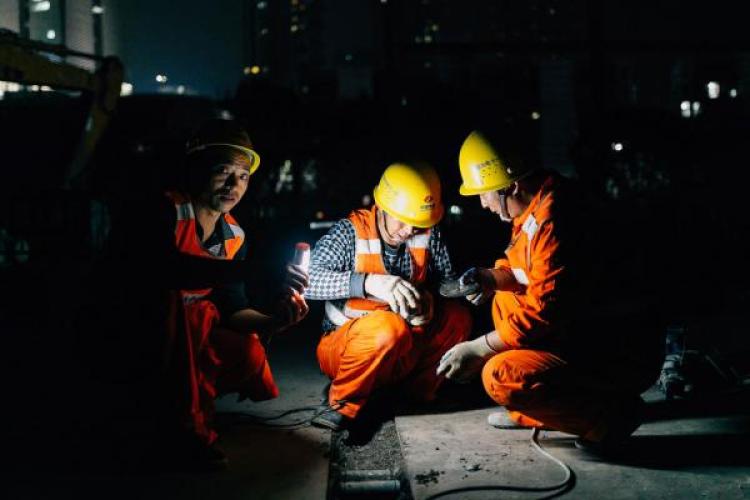 New research helps explain why people who work the night shift are more likely to develop diabetes and other chronic diseases.

One of those proteins was glucagon, which prompts the liver to push more sugar into the bloodstream. When subjects stayed awake at night, levels not only surged at night instead of day but also peaked at higher levels. Long term, this pattern could help explain why night-shift workers tend to have higher diabetes rates, Depner said.

The simulated night shift schedule also decreased levels of fibroblast growth factor 19, which has been shown in animal models to boost calorie burning or energy expenditure. This fell in line with the finding that subjects burned 10 percent fewer calories per minute when their schedule was misaligned.

Thirty proteins showed a clear 24-hour-cycle, with the majority peaking between 2 and 9 p.m. The takeaway: When it comes to diagnostic blood tests – which are relied upon more often in the age of precision medicine – “timing matters,” said Wright.

Previous studies have looked at how genes which code for proteins in specific organs vary in their experssion patterns at different times of day. By studying the actual proteins in the blood, researchers can study a broader array of them and get a better picture of what’s happening in real time, Depner said. In a future study, he plans to study a larger group of subjects, including women.

He and Wright note that they kept all the study subjects in dim light conditions, so that light exposure (which can also strongly affec tthe circadian system) didn’t influence results.

Even without the glow of electronics at night, changes in protein patterns were rapid and widespread.

Seventy-eight years ago on Jan. 27, the Auschwitz concentration camp closed after liberation by the Soviet army. Professor Janet Jacobs, who researches genocide, trauma and collective memory, discusses the ways in which the experiences and trauma of Holocaust survivors are passed down through generations. END_OF_DOCUMENT_TOKEN_TO_BE_REPLACED

A model of your very own kidney made entirely from soft and pliable polymers? Researchers at two CU campuses are on the cusp of 3D printing realistic replicas of human anatomy. END_OF_DOCUMENT_TOKEN_TO_BE_REPLACED

Legalizing recreational cannabis does not increase substance use disorders or use of other illicit drugs in adults and may reduce alcohol-related problems, according to new research. The study also found no link between cannabis legalization and increases in cognitive, psychological, social, relationship or financial problems. END_OF_DOCUMENT_TOKEN_TO_BE_REPLACED
Return to the top of the page