Self-control shaped by your 'in-group' as early as preschool

How a child’s social groups behave can significantly influence his or her ability to practice self-control and could have lasting impacts on development of this critical skill, according to a new CU Boulder study of 100 preschoolers.

The study, published in the journal Psychological Science, found that when kids between 3 and 5 years old were told that members of their “in-group” opted to wait to receive two marshmallows, rather than getting one immediately, they were twice as likely to wait themselves. They also grew to perceive other kids who delayed gratification as “nicer.”

The findings run counter to prevailing assumptions that self-control—a key predictor of employment, academic success and health in adulthood—is primarily shaped by neurocognitive or psychological factors. The research suggests that much can be done to cultivate it in children and even adults, the study authors said

“Typically, self-control has been thought of as a trait that a child has or doesn’t have,” said lead author Sabine Doebel, a postdoctoral researcher in the Department of Psychology and Neuroscience. “Ours is the first study to show that group behavior and group norms influence self-control in children.”

For the study, Doebel and co-author Yuko Munakata, a psychology professor at CU Boulder’s Institute of Cognitive Science, recruited 100 Colorado preschoolers and had them complete a variation of the “marshmallow test” a classic test of self-control.

While a video camera rolled, each child entered a room where they found a marshmallow and a colored T-shirt. A researcher told the child to put the T-shirt on, showed them pictures of kids wearing the same color and then told them they got to be in that group. They also showed them pictures of kids in different colored shirts, a.k.a. “the out group.”

The child was offered a choice: They could eat one marshmallow now or wait until the researcher went to get more and receive two. “Most children really want that second marshmallow so they say, ‘I’ll wait,’” said Doebel. 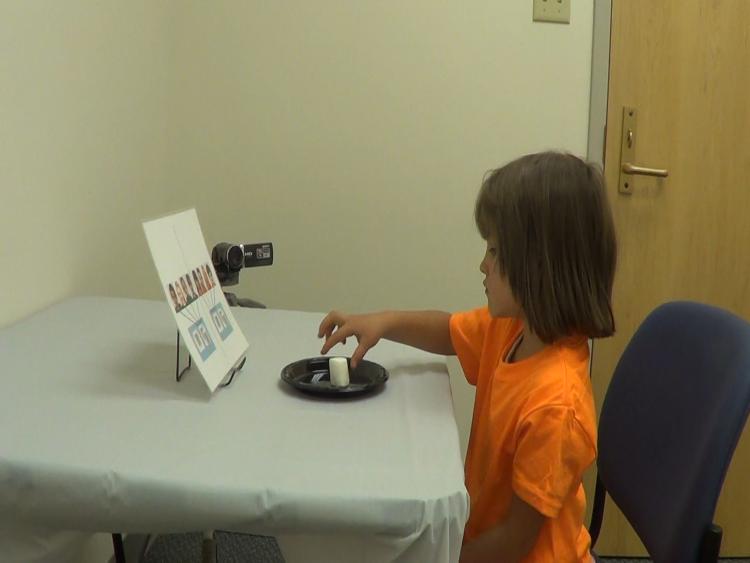 “It is extremely hard for kids this age to sit there that long, but just knowing their in-group waited seemed to make it easier,” said Munakata.

In a second experiment, the first test was repeated. Then children were shown photos of other children not affiliated with the in- or out-group and told whether those children waited or didn’t wait. When asked who they would rather play with the kids whose in-group had waited picked the kids who had waited.

“This suggests that they were not just copying their group in the moment, but that what their group did actually shaped the way they felt about self-control later,” said Doebel.

Practicing self-control in key developmental years is not only important for safety reasons (resisting the temptation to touch a hot stove or chase a ball into the street, for example), but may also have long-term consequences by strengthening neural connections associated with the skill and making it easier to practice throughout life.

“A child’s level of self-control predicts all kinds of important life outcomes, from what they earn to what their health looks like to how likely it is that they will end up in jail,” said Munakata.

The authors stressed that while preschool is an ideal time to do so, it’s never too late to cultivate self-control. They advise exposing kids to good role models—in books, shows, and real life—who exhibit it and value it. The same holds true for adults. “Studies have shown that adults are more likely to lose weight, quit smoking or achieve other goals that require self-control if their friends or friends of friends do,” said Munakata. “So choose your friends accordingly.”

Seventy-eight years ago on Jan. 27, the Auschwitz concentration camp closed after liberation by the Soviet army. Professor Janet Jacobs, who researches genocide, trauma and collective memory, discusses the ways in which the experiences and trauma of Holocaust survivors are passed down through generations. END_OF_DOCUMENT_TOKEN_TO_BE_REPLACED

A model of your very own kidney made entirely from soft and pliable polymers? Researchers at two CU campuses are on the cusp of 3D printing realistic replicas of human anatomy. END_OF_DOCUMENT_TOKEN_TO_BE_REPLACED

Legalizing recreational cannabis does not increase substance use disorders or use of other illicit drugs in adults and may reduce alcohol-related problems, according to new research. The study also found no link between cannabis legalization and increases in cognitive, psychological, social, relationship or financial problems. END_OF_DOCUMENT_TOKEN_TO_BE_REPLACED
Return to the top of the page