Researchers at CU Boulder have discovered microbes living in a toxic volcanic lake that may rank as one of the harshest environments on Earth. Their findings, published recently online, could guide scientists looking for signs of ancient life on Mars.

The team, led by CU Boulder Associate Professor Brian Hynek, braved second-degree burns, sulfuric acid fumes and the threat of eruptions to collect samples of water from the aptly-named Laguna Caliente. Nestled in Costa Rica’s Poás Volcano, this body of water is 10 million times more acidic than tap water and can reach near boiling temperatures. It also resembles the ancient hot springs that dotted the surface of early Mars, Hynek said. 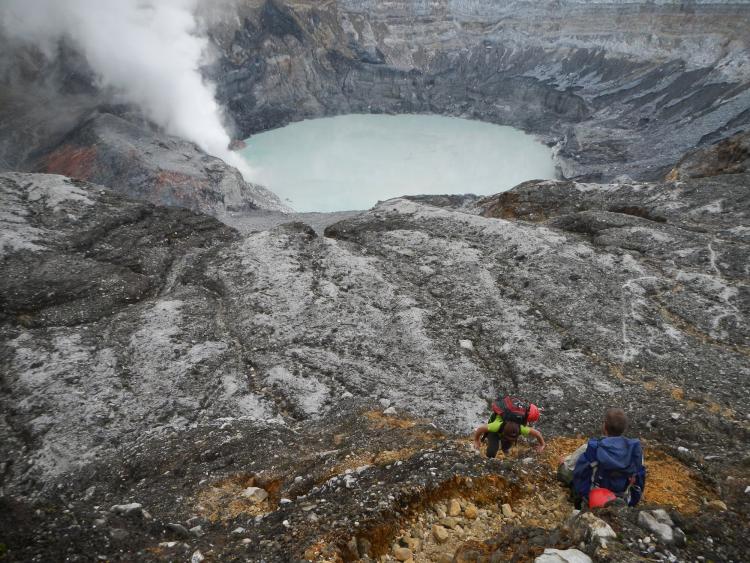 The Costa Rican lake supports living organisms—but only one. Hynek and his colleagues found microbes belonging to just a single species of bacteria in the lake water, a rock-bottom level of diversity.

“Even in an extremely harsh environment, there can still be life,” said Hynek of the Laboratory for Atmospheric and Space Physics and Department of Geological Sciences. “But then there’s very little life. Mars was just as extreme in its early history, so we should probably not expect to find evidence of large-scale biodiversity there.”

Hynek, who is also the director of CU Boulder’s Center for Astrobiology, has spent much of his career searching for places on Earth today that look like Mars did nearly four billion years ago. At that time, liquid water was plentiful on the surface. His goal is to better understand the environments where life may have evolved on the Red Planet.

It’s a hard task: Rampant volcanism during that period created volatile and mineral-rich pools of water, giving rise to “Yellowstones all over Mars,” Hynek said.

To find comparable environments, Hynek and his colleagues have traveled to dozens of volcanoes in Iceland, Nicaragua and, most recently, Costa Rica. Laguna Caliente may not be the most extreme habitat for life on Earth, he said, but it may be among the most dynamic. Here, water temperatures can swing wildly in the span of hours, and the magma channels running under the lake kick off frequent, geyser-like eruptions.

“We’re at the limits of what life on Earth can tolerate,” Hynek said. “It’s not somewhere you want to spend a lot of time because you’d probably get covered in boiling mud and sulfur from the eruptions.”

To search for living organisms in this “fringe” environment, the researchers scanned samples of lake water for DNA. In research published this month in the journal Astrobiology, they found the signature of one species of bacteria belonging to the genus Acidiphilium, a group of microbes that scientists have previously seen in toxic drainage from coal mines and other harsh locations.

Even for an extreme habitat, that number was low: “It’s not uncommon to find an environment with no life, say in a volcano that’s self-sterilizing,” Hynek said. “But to find a single type of organism and not a whole community of organisms is very, very rare in nature.”

If life did evolve on Mars, he said, it might look like Laguna Caliente’s lone resident. The Red Planet, Hynek explained, doesn’t get much sunlight, so photosynthetic organisms likely wouldn’t have arisen there. Instead, he said that Martian life might have survived like the lake’s bacterium—by processing the energy from iron- or sulfur-bearing minerals, which were abundant in Mars’ historic hydrothermal systems. 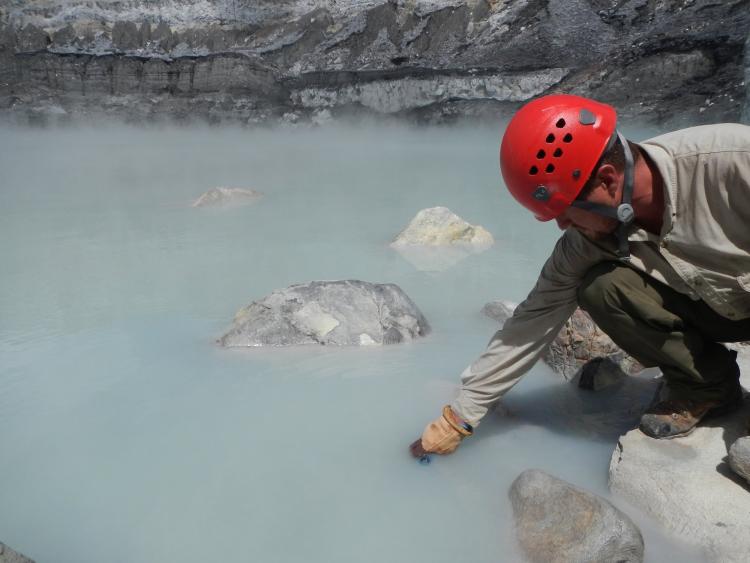 In 2020, NASA is planning to send the Mars 2020 Rover to the Red Planet to hunt for fossil evidence of life. Hynek said that they should look first at the planet’s own Yellowstones: “Such environments are probably where life first evolved on Earth. If it happened on Mars, too, then I think those are the key places to look.”

They are also perilous locations for Earth-based scientists. To collect vials of water from Laguna Caliente, the researchers dodged vents that shot off toxic, boiling hot steam. Laguna Caliente itself no longer exists—the lake was drained during a massive eruption from Poás that began just seven days after Hynek's most recent trip there and shut down the surrounding national park.

“It’s part of the status quo for the job,” Hynek said.

For decades, a community of "data stewards" has toiled behind the scenes to build records showing that humans, and not the sun, are responsible for driving the planet's climate into dangerous territory. END_OF_DOCUMENT_TOKEN_TO_BE_REPLACED

Astrophysicist John Bally takes a look at the first images from NASA's James Webb Space Telescope—an instrument that is gazing farther into space and time than anything ever built by humans. END_OF_DOCUMENT_TOKEN_TO_BE_REPLACED

When NASA's OSIRIS-REx spacecraft arrived at the asteroid Bennu, scientists discovered something surprising: The asteroid's surface wasn't smooth like many were expecting but was covered in large boulders. Now, a team of physicists think they know why. END_OF_DOCUMENT_TOKEN_TO_BE_REPLACED
Return to the top of the page