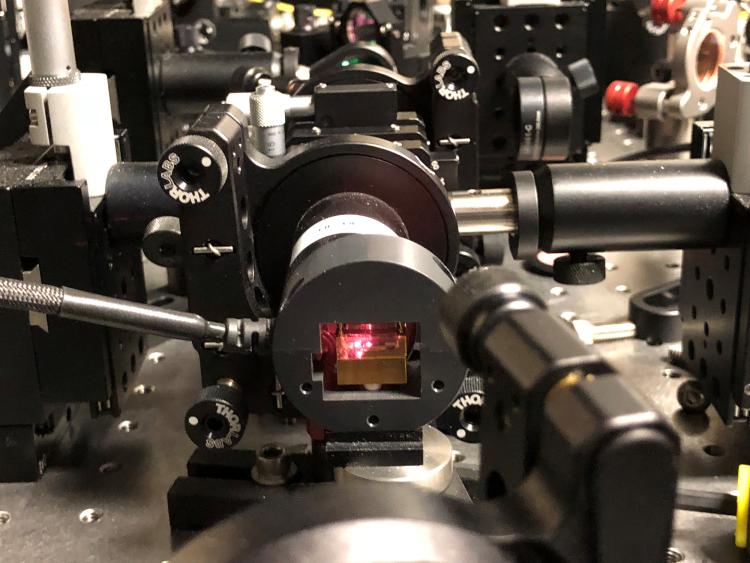 A device developed by NIST, seen here, converts laser light into pairs of “entangled” photons that researchers then measure to generate a string of truly random numbers. (Credit: Shalm/NIST)

Researchers at the National Institute of Standards and Technology (NIST) and CU Boulder have developed a method for generating numbers guaranteed to be random by quantum mechanics. Described in the April 12 issue of Nature, the experimental technique surpasses all previous methods for ensuring the unpredictability of its random numbers and may enhance security and trust in cryptographic systems.

Random numbers are used hundreds of billions of times a day to encrypt data in electronic networks. But these numbers are not certifiably random in an absolute sense. That’s because they are generated by software formulas or physical devices whose supposedly random output could be undermined by factors such as predictable sources of noise. Running statistical tests can help, but no statistical test on the output alone can absolutely guarantee that the output was unpredictable, especially if an adversary has tampered with the device.

NIST has developed a method for generating numbers guaranteed to be random by quantum mechanics. The method generates digital bits (1s and 0s) with photons, or particles of light. An intense laser hits a special crystal that converts laser light into pairs of photons that are entangled, a quantum phenomenon that links their properties. These photons are then measured to produce a string of truly random numbers.

“It’s hard to guarantee that a given classical source is really unpredictable,” said Peter Bierhorst, a mathematician and postdoctoral researcher at NIST and the Department of Physics at CU Boulder. “Our quantum source and protocol is like a fail-safe. We’re sure that no one can predict our numbers.”

“Something like a coin flip may seem random, but its outcome could be predicted if one could see the exact path of the coin as it tumbles. Quantum randomness, on the other hand, is real randomness. We’re very sure we’re seeing quantum randomness because only a quantum system could produce these statistical correlations between our measurement choices and outcomes.”

Co-authors on the new paper include Emmanuel Knill of the CU Boulder Center for Theory of Quantum Matter and NIST and Lynden K. Shalm of the Department of Physics at CU Boulder and NIST.

Read the full story from NIST.

What happens when an expert on natural language processing asks a chatbot to write a children's book in the style of Dr. Seuss? Professor Kai Larsen put the question to the test. END_OF_DOCUMENT_TOKEN_TO_BE_REPLACED

A model of your very own kidney made entirely from soft and pliable polymers? Researchers at two CU campuses are on the cusp of 3D printing realistic replicas of human anatomy. END_OF_DOCUMENT_TOKEN_TO_BE_REPLACED

For people who are blind or visually impaired, finding the right products in a crowded grocery store can be difficult without help. A team of computer scientists at CU Boulder is trying to change that. END_OF_DOCUMENT_TOKEN_TO_BE_REPLACED
Return to the top of the page