Alumni in Focus: Adjustable prosthesis offers mobility to the masses 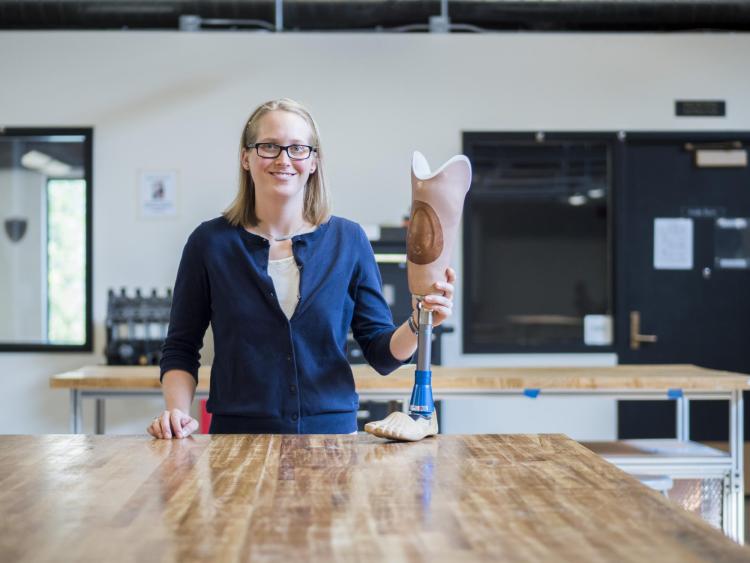 Traveling to an impoverished area of South Africa and seeing the great need of amputees for well-fitting prosthetic limbs was life-changing for Kern.

While there, she met a man who was a bilateral above-knee amputee. He had no prosthetic legs. A wheelchair was in the room, but, without help, he couldn’t wheel himself up the dirt paths in the hilly countryside, leaving him dependent upon someone to help him get around. When his caregiver wasn’t there, he waited, alone, lying in bed.

“That image is stuck in my head forever,” Kern said. “I would like to go back and find that man again.”

With the image of that man and all the others she saw there without prosthetic devices, Kern was inspired to create ReForm, a company focused on the development of a more standard-sized and user-adjustable prosthetic socket for lower-limb amputees. A standard-sized socket allows mass production to be used to help reduce costs. User adjustability enables users to easily adjust the device as their residual limbs change over time.

The invention earned her and her CU Boulder engineering team honors at the 2016 New Venture Challenge, boosting the chances the innovation will be transformed into a practical solution for amputees around the world. Kern received a PhD in 2016 and earned a certificate in Engineering for Developing Communities Program through the Mortenson Center.

The socket is considered the most important part of a lower-limb prosthesis. An ill-fitting socket can reduce a person’s ability to use a prosthesis, because it can cause pressure sores and blisters. If the change in the residual limb is significant enough, a new socket would need to be fabricated. Providing a proper fit requires a high level of expertise. For amputees with limited or no access to prosthetists—specialists who make and adjust artificial limbs—amputees abandon the prosthetic leg completely and resort to using crutches or wheelchairs.

Aside from high cost, a big drawback of providing artificial limbs to people in developing countries is the lack of healthcare professionals trained in making and fitting the devices. Additionally, prostheses are not specifically designed for the mobility challenges facing people in rural environments or low-resource areas: dirt roads and no sidewalks; hilly, rocky terrain; muddy fields.

While in South Africa, Kern spent three months working with other engineers and prosthetists so she could design a low-cost solution for people, most of whom live on less than $85 a month and may have to travel several hours to the nearest clinic. 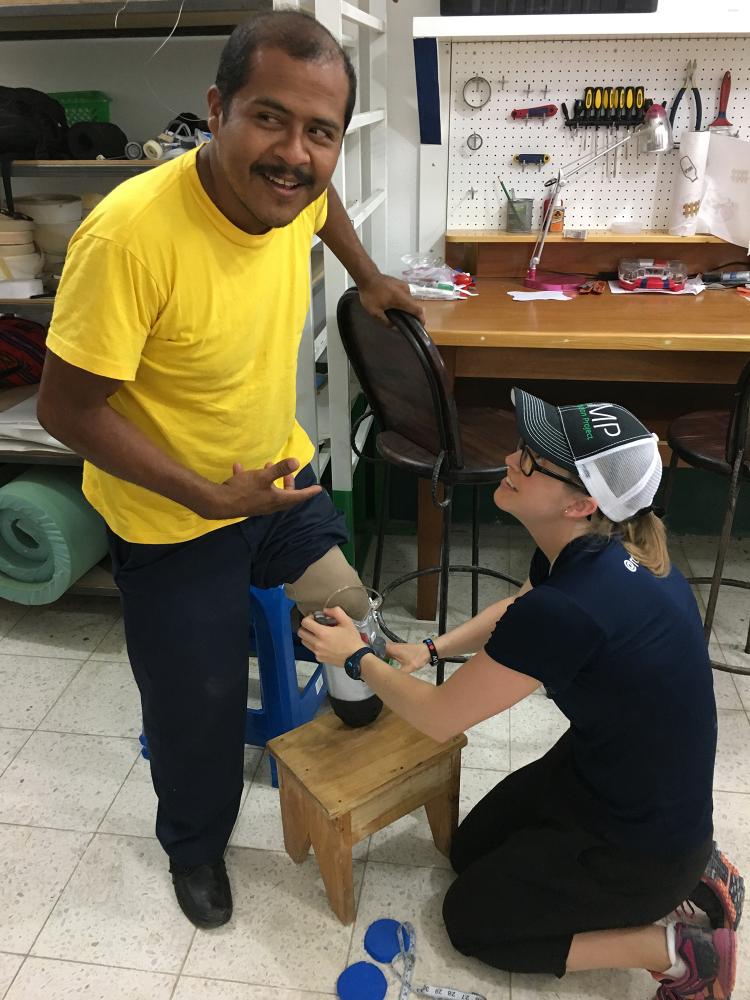 “Just giving someone a prosthetic device isn’t going to be an instant solution,” Kern said. “Where other projects in low-resource areas have failed in the past is the maintenance part of it. We can provide people with a water pump, for example, but where’s the maintenance system when it breaks? Is it easy to fix? Is that part even available there? Those are the types of things that have been overlooked in trying to solve problems in the developing world.

“When I develop this technology and take it to the developing world, I don’t want it to be something that just gets transferred over there,” she said. “I want to be sure it can be supported and maintained by the local community so that it may have a positive, sustainable impact.”

The current prototype is a general shaped rigid socket, which incorporates an air bladder with multiple independent cavities. The cavities in the bladder can be inflated individually to provide the custom fit an amputee needs. The amputee controls the air bladder by using a hand pump mounted directly on the socket.

Kern recently returned from a trip to Guatemala with Range of Motion Project (ROMP), a nonprofit organization that provides prosthetic and orthotic care to people without access to these services. While working in a clinic with a multidisciplinary team of prosthetists, technicians and physical therapy specialists, Kern got to try out her socket. She received encouraging reactions from prosthetists and patients.

One man who tested Kern’s device was joyful at being able to easily adjust it himself.

“What I like the most,” he said, “is that it gives me the control to adjust the fit of my socket so that I can do different activities—like walking, running and working in the field—more easily.”

Most of the lower-limb amputees that Kern saw while In Guatemala stemmed from complications from diabetes. The rest were the result of accidents or violence.

Having first-hand experience really emphasized the problem of how lengthy the fitting process is, especially since some people had to travel eight hours just to get to the clinic. They’d make the trip several times because the entire process is so long.

“It’s the value of control,” Kern said. “Seeing him have the control to change his socket easily and be able to walk or work in the field was exciting.”

Kern’s interest in prosthetics is due, in part, to the influence of her parents. With a mom who’s a nurse and a dad who’s an engineer, Kern is merging mechanical engineering with medical-device design and her desire to design and develop medical devices to meet people’s basic needs.

“This is technology that can also be useful for people anywhere,” she said. “The innovative spirit at CU is great. All of my technical skills and practical experience from the Department of Mechanical Engineering, New Venture Challenge and Catalyze CU programs provided me with an excellent foundation and the confidence to move forward with this idea.” 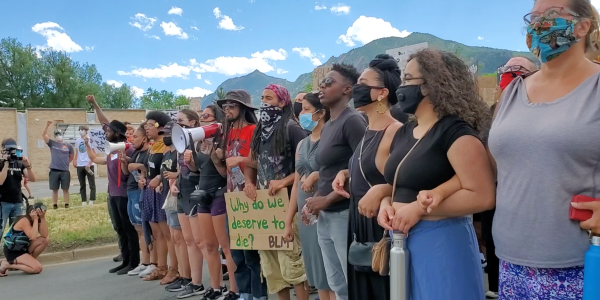 Boulder is the happiest city in the US...for some

Fifteen years ago in a documentary filmmaking class, alumna Katrina Miller received a standing ovation for a short movie about her friend, a Black student who’d received a racially charged letter. Now she is once again using documentary film as a vehicle for social change, sparking important conversations about race and inclusion in Boulder. END_OF_DOCUMENT_TOKEN_TO_BE_REPLACED 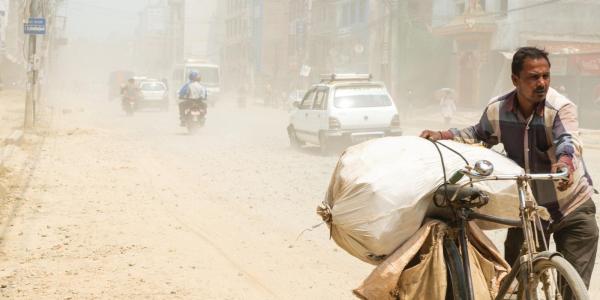 Nepal has some of the worst air quality in the world. The Health Effects Institute estimates more than 42,000 deaths were attributed to air pollution in the country in 2019 alone. END_OF_DOCUMENT_TOKEN_TO_BE_REPLACED 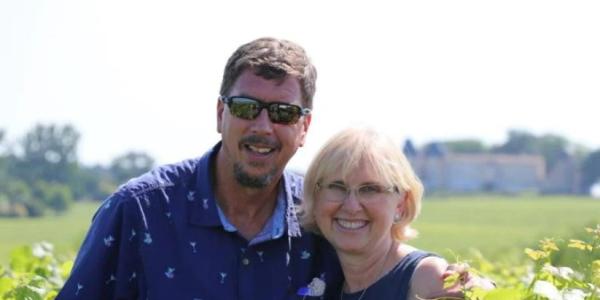 Alumni Cliff and Carol Pearson are investing in the next generation of Forever Buffs by funding scholarships for engineering and history students at CU. Read their story and hear about their impact from two engineering scholarship recipients. END_OF_DOCUMENT_TOKEN_TO_BE_REPLACED
Return to the top of the page