Few people figure out how they want to change the world in middle school. But in eighth grade, Peter “Max” Armstrong did just that. 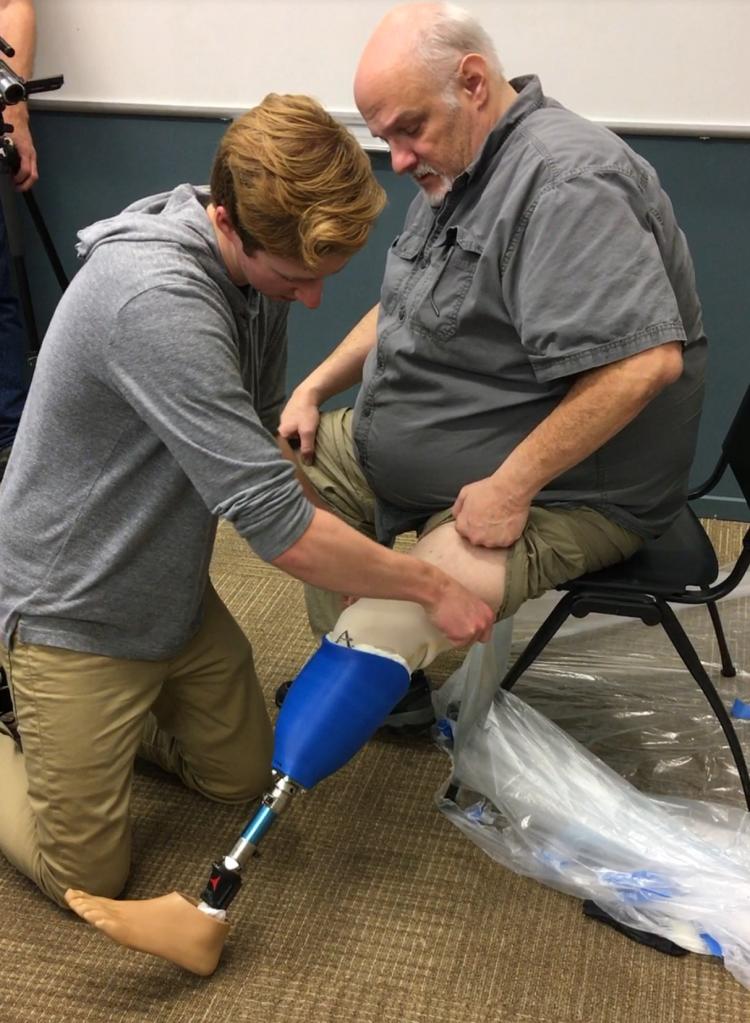 As part of a robotics project, his teacher prompted him to solve a problem in medicine. He talked to a family friend, a double amputee and prosthetist and learned the most expensive and time-consuming part of a prosthetic limb is the socket, which connects to the residual limb. Since then, Armstrong has worked for years—mostly on his own—to create an alternative.

“It's something that can have a huge impact on people around the world, and can really improve their daily lives,” said Armstrong, now a third-year student in CU Boulder’s Department of Mechanical Engineering.

About two million Americans are amputees, and many—even those with health insurance—have trouble affording prosthetics. Typically, the cost of the prosthetic socket ranges from $3,000 to $5,000 but can cost as much as $20,000 for more difficult fittings. The fitting process requires multiple trips to the prosthetist over two weeks to a couple months. In developing countries, a majority of amputees lack access to prosthetics.

In Armstrong’s system, the prosthetist selects the best fitting socket from a series of pre-manufactured plastic shells of varying sizes. Then, the inside of the shell is filled with an expanding foam that helps form a precise fit. This socket can be produced in just 30 minutes and costs about $200. Armstrong’s successfully tested the system with three below-knee amputees so far.

In his garage, he tested different materials and designs to create an affordable and quickly-fitted socket. He patented Go Prosthetics three years ago, a system that drastically reduces the time and cost associated with fitting a prosthetic.

“I'm getting to the end of the design process and realizing that I've come out with a project that has a pretty good potential to change the way that amputees are able to move,” said Armstrong.

This year, Armstrong’s project is a finalist in National Geographic “Chasing Genius” challenge, and, if he’s chosen as one of four winners, he’ll get $25,000 to further his mission. He is hoping the grant would help fund a larger clinical trial to get more feedback on the system. Although the fitting is inexpensive compared to traditional prosthetics, it’s still hard for him to pay for it on his own.

“What I'm trying to do is just make things easier for people who have already had more difficulties than most people normally experience,” said Armstrong. “I think that if I’m able to get this into the final stages and bring it to market, I can really improve things for a lot of people who really weren’t able to walk or weren’t able to live their daily lives.”

Supporters can cast votes for Armstrong’s project through Friday, Sept. 15.

Sarah Luettgen is building a future as an aerospace professional, studying the space domain of satellite orbits in the extreme upper reaches of Earth’s atmosphere. END_OF_DOCUMENT_TOKEN_TO_BE_REPLACED

Buffs soccer captain Hannah Sharts talks about playing every minute, scoring as a defender and how she’s using her name, image and likeness to help promote female student-athletes. END_OF_DOCUMENT_TOKEN_TO_BE_REPLACED
Return to the top of the page