In 1977, two NASA space probes destined to forever upend our view of the solar system launched from Cape Canaveral, Florida.

The identical spacecraft, Voyager 1 and Voyager 2, took off in in August and September 40 years ago and were programmed to pass by Jupiter and Saturn on different paths. Voyager 2 went on to visit Uranus and Neptune, completing NASA’s “Grand Tour of the Solar System,” perhaps the most exhilarating interplanetary mission ever flown.

CU Boulder scientists, who designed and built identical instruments for Voyager 1 and Voyager 2, were as stunned as anyone when the spacecraft began sending back data to Earth.

“This was a really big deal,” says Professor Fran Bagenal of CU Boulder’s Laboratory for Atmospheric and Space Physics (LASP), a mission scientist who began working with Voyager data as a doctoral student at MIT. “The outer solar system went from being fuzzy planets with dots for moons to a whole set of new and amazing worlds.”

Forty years later, the two spacecraft are still traveling—about a million miles per day. Although both are still in contact with scientists at the Jet Propulsion Laboratory in Pasadena, California, which is managing the mission for NASA, Voyager 1 is roughly 13 billion miles away and has punched its way into interstellar space. Voyager 2 is not far behind but on a different trajectory that will soon take it out of the cosmic neighborhood.

The LASP photopolarimeter subsystem (PPS), a telescope that measured the intensity and polarization of light at different wavelengths, was used for a variety of observations. It helped scientists distinguish between rock, dust, frost, ice and meteor material. It also observed the structure of Jupiter's Great Red Spot and the properties of the clouds and atmospheres of Jupiter, Saturn, Uranus and Neptune, as well as Saturn's largest moon, Titan. 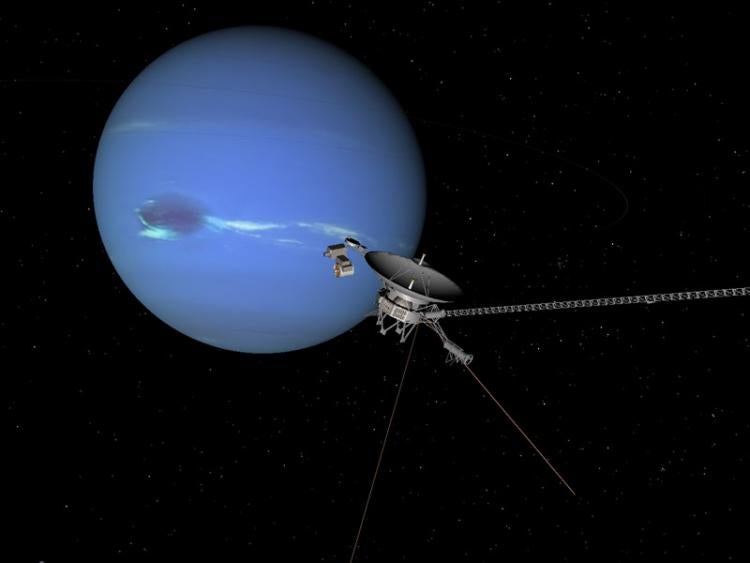 The huge surprise at Jupiter’s moon, Io—that a moon the size of Earth’s could have 10 times the volcanic activity of our home planet—still astonishes scientists today.

“It was really the volcanoes on Io that set me on a path of 40 years of Voyager exploration,” Bagenal said. “And the first glimpse of the gas giants and their moons changed our view of the solar system and our understanding of how it may have formed.”

“Voyager was nothing less than spectacular,” says LASP Professor Larry Esposito, whose team used the PPS to watch stars dip behind the rings of Saturn, Uranus and Neptune. “We were able to compare the rings of all the giant planets, looking at the structure and dynamic behavior.”

One of the intriguing discoveries involving the Voyager science team was the intricate structure of Saturn's F ring—a ring Esposito discovered in 1979 using data from NASA's Pioneer 11 mission. Scientists determined the faint F ring was made up of three separate ringlets that appeared to be braided together, and that the inner and outer limits of the ring were controlled by two small moons called “shepherd satellites.”

Esposito, who chaired the Voyager Rings Science Working Group from 1984 to 1989, said density waves—ripple-like features in the rings caused by the influence of Saturn's moons—allowed the team to estimate the weight and age of Saturn's rings. Careful study indicates they might be as old as the solar system itself, said Esposito, who also is the principal investigator on a $12 million CU Boulder instrument package aboard NASA's Cassini mission to Saturn, launched in 1997, which is scheduled for a successful but fiery end Sept. 15.

A look back and forward

Charlie Hord, a former planetary scientist at LASP, remembers the heyday of Voyager. Hord, principal investigator for a time on the Voyager spacecraft LASP instruments, shook his head in wonder as he recalled some of the discoveries.

“All of the scientists were dazzled by the pictures of the moons of Jupiter and Saturn coming back,” recalls Hord, 79, who still lives in Boulder. “To finally look at them up close was the most remarkable thing I've ever seen in my life.”

In 1990, Voyager 1 turned around one last time and took a portrait of the solar system—a sequence of photos that revealed six of the nine planets in an orbital dance. From nearly 4 billion miles away, Earth took up only a single pixel. 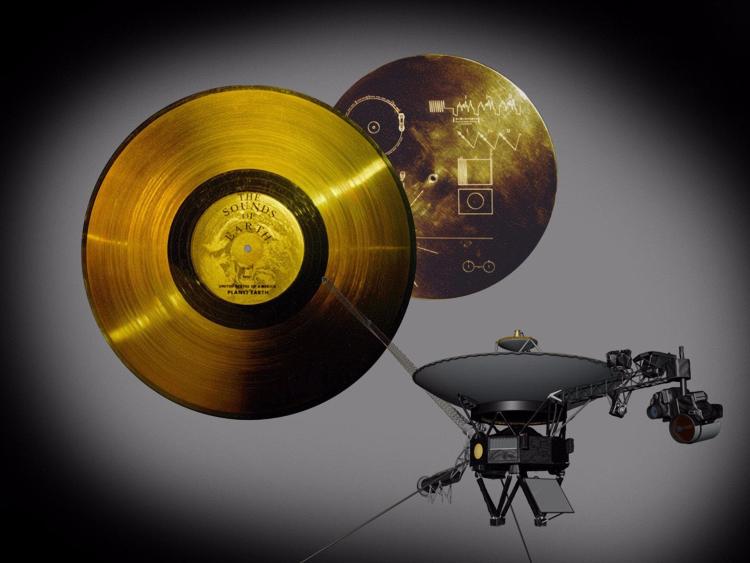 Rendering of the Voyager spacecraft and its Golden Records

On the off chance either spacecraft encounters another civilization, each is carrying what are known as the Golden Records—gold-plated copper phonograph records with greetings in 54 languages; the sounds of surf, wind, thunder, birds and whales; analog photos of people and places on Earth; diagrams of DNA; and snippets of music ranging from Bach and Beethoven to Chuck Berry. Berry even played Johnny Be Goode on his guitar on the steps of JPL during the 1989 Voyager 2 Neptune encounter.

The spacecraft carries a stylus set up in the correct position so that aliens could immediately play the record, named “Murmurs from Earth” by the late Carl Sagan, who conceived the Golden Record effort.

In 40,000 years, Voyager 1 will float within 9.3 trillion miles of the star AC+793888 in the constellation Camelopardalis. In 296,000 years, Voyager 2 will pass within 25 trillion miles of Sirius, the brightest star in the sky. Perhaps on the way, the spacecraft will encounter some musically inclined aliens up for a little Bach, Beethoven or Berry.

A PBS special titled The Farthest: Voyager in Space first aired on public television Aug. 23 and will air again on Sept. 13.

CU Boulder has been selected as a member of the United States Space Command Academic Engagement Enterprise, a new national program designed to expand collaboration and academic exchanges between universities and Space Command. END_OF_DOCUMENT_TOKEN_TO_BE_REPLACED

Since July 2022, a miniature satellite about the size of a shoebox has been orbiting Earth and monitoring how much solar energy reaches the atmosphere, one of the "most important" Earth science measurements. Now, scientists are finalizing their analysis of the first five months of the testing. END_OF_DOCUMENT_TOKEN_TO_BE_REPLACED

The historic spacecraft soon hit Earth's atmosphere flying at speeds of almost 25,000 mph. CU Boulder aerospace engineer Iain Boyd breaks down what will happen to the capsule, and how NASA will keep it safe on reentry. END_OF_DOCUMENT_TOKEN_TO_BE_REPLACED
Return to the top of the page