A summer job in sub-zero temperatures

The thermostat may read 90 degrees Fahrenheit outside the sprawling federal research complex in Lakewood, Colorado, but inside, CU Boulder undergraduate student Casey Vanderheyden is donning a bulky winter coat, gloves and boots as though she is headed to the South Pole.

In a sense, she is. Vanderheyden is reaching the end of her six-week summer work stint at the National Ice Core Laboratory (NICL), one of the country’s most prominent storage facilities for ice samples collected from around the world. Inside the deep freeze room—which is kept as cold as a crisp minus-36 degrees Celsius—cylindrical tubes of ice cores line the shelves in a vast archive that, cumulatively, represents a sizable amount of U.S. polar research dating back decades.

Vanderheyden’s job is to chop up these ice cores. Inside the work room (itself about minus-20 degrees Celsius), she saws slices off a 3-foot-long piece, creating many thinner cores of varying sizes. The cores, which were taken from the South Pole ice core project, will be divvyed up and sent out to other institutions nationally, including CU Boulder’s Institute of Arctic and Alpine Research (INSTAAR). Vanderheyden takes frequent breaks to rest and eat snacks in the break room (since working in such cold temperatures burns more calories). At the end of the day, she sometimes sports both an ice burn and sunburn on her face. 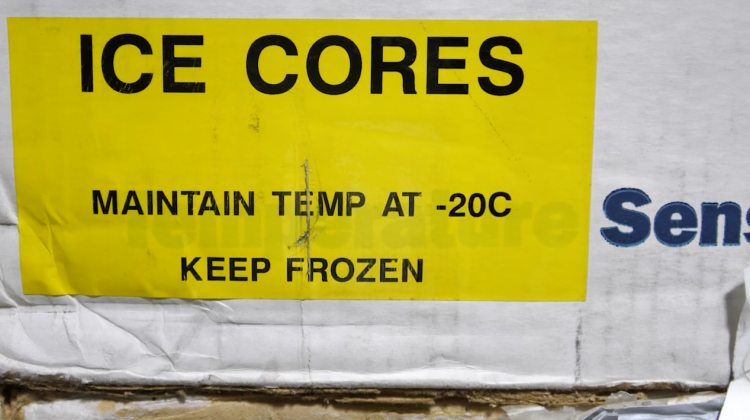 “It's gotten a lot of interesting inquiries,” she said about her job. “Everyone’s like ‘what are you doing?’. . . I've always wanted to bring my friends and be like ‘step in the freezer, it’s really cool!’”

Why work in a freezer during the heat of summer? Vanderheyden and seven other CU Boulder students are contributing to a national effort to collect and analyze ice cores to create a record of past atmospheric conditions. They are preparing the ice samples now and will later monitor them as they are melted and analyzed for their oxygen isotope levels—a chemical signature that can tell us about temperatures dating back hundreds of thousands of years. Not only are the students creating a climate record, they are gaining valuable research experience and insight into their own future goals.

Most of the students at NICL are geology, environmental science or environmental engineering majors. They found out about the job through department postings or class tours of the Stable Isotope Lab. Vanderheyden’s a bit of an outlier—a senior in chemical and biological engineering (her roommate shared the job posting with her).

“I figured it would be a really different kind of opportunity from things that I’ve done in my major, and I’ve found it to be incredibly educational and I’ve learned so many things,”she said.

From May to late June, Vanderheyden and the other students worked at NICL chopping up the ice cores, which are up to 50,000 years old. The ice cores, she said, are like fossils that store  ancient climate information. Researchers have analyzed ice from Antarctica dating back over 800,000 years. Each meter of ice holds the history of snowfall from where it was collected – a time capsule of trapped gases from thousands of years ago. Variations in the ice’s chemistry, dust and trapped air bubbles tell a story about past climates, plant life and volcanic eruptions.

A few weeks later, Vanderheyden arrives at INSTAAR’s Stable Isotope Lab to—quite literally—watch the ice melt. The core rests vertically in a clear tube, its end located on a warm metal plate. The ice slowly melts and the water is transferred through a tangle of tiny tubes, filtered and “de-bubbled” and sent to a device that vaporizes the sample and shoots lasers through it. The process reveals the amounts of O16, O17 and O18 isotopes, which are illustrated on an adjacent computer.

The isotope data helps build a detailed record of past temperatures in Antarctica, and is central to all other ice core analyses, like dust, volcanic events and trapped gases. The amount of these isotopes is directly proportional to the temperature at the time when the snow fell on the ice sheet. During warmer periods, O18 levels are higher. Therefore, by knowing the age of the sample and the isotope ratio, researchers can tell what the climate was like thousands of years ago.

“Casey are her undergraduate colleagues are a really critical part of our research operation here,” said INSTAAR Bruce Vaughn, who manages the Stable Isotope Lab. “I feel fortunate to be able to offer this kind of experience to the undergraduates because it really takes over where the classroom leaves off.” 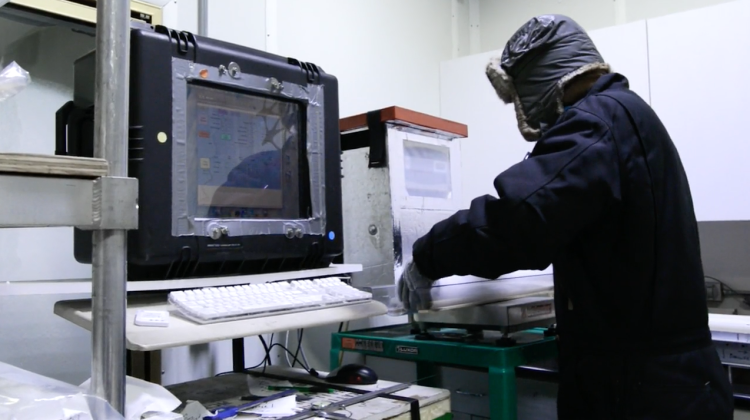 “I see myself as part of the legwork that goes into this end goal of a map of information that is used to make future decisions or analyze how things are changing in the world,” said Vanderheyden. “I feel like I’m part of a team that’s getting information for the future.”

While much of her job seemingly consists of rote tasks and monitoring, she must be prepared to act quickly and decisively in the event of an emergency. The ice cores are irreplaceable and the equipment is expensive. If, for example, a tube carrying the melted ice were to get clogged or the small freezer containing the core were to fail, ancient climate information may be lost forever.

“The name of game is basically to keep the machine running,” said Owen Van De Graaf, a senior majoring in geology who works alongside Vanderheyden. “Very few bad things happen, but when they do, it’s terrible and you have to work really hard.”

Vanderheyden and Van De Graaf worked as team for the first week at INSTAAR, putting in a daily shift from 8:30 a.m. to 2:30 p.m. But soon, now that she is trained up, she’ll be “melting” alone. “It’s scary, the thought you could lose some of it if you mess up,” she said.

But, with careful monitoring, the worst-case scenario is that she’ll have to stop the experiment and return the ice to safety in the freezer.

The students are excited about their futures. Vanderheyden always imagined herself getting into medical research, working with tissue and cells. But she was surprised how relevant her knowledge in chemistry was for studying ice cores.

“It’s definitely given me a better idea of the sorts of things that are out there,” she said.

Vanderheyden said that she definitely wants to pursue some type of research in the future, although not necessarily atmosphere-related.

For Van De Graaf, the experience helped him narrow down his options in the field of geology, where people study many things like water, oil and gas, and the atmosphere. He’s excited to keep helping the Earth by studying the climate and contributing to a detailed record that can aid in future policy. He’s also made connections with climate researchers from many universities.

The two now encourage their fellow students to apply for research jobs. They point out that the lab welcomes students of all class years, including freshmen. Both appreciated the opportunity to get involved with world-class research as undergraduates.

“A lot of times, you feel like as a freshman, there’s no way I’m going to be able to work with professors or researchers. But it really is something you can do,” said Vanderheyden.

To her, working in a freezer is worth it to be at the forefront of climate change research.

“I’m not just standing back and watching the research, I’m actually contributing and learning what the research is going towards.” 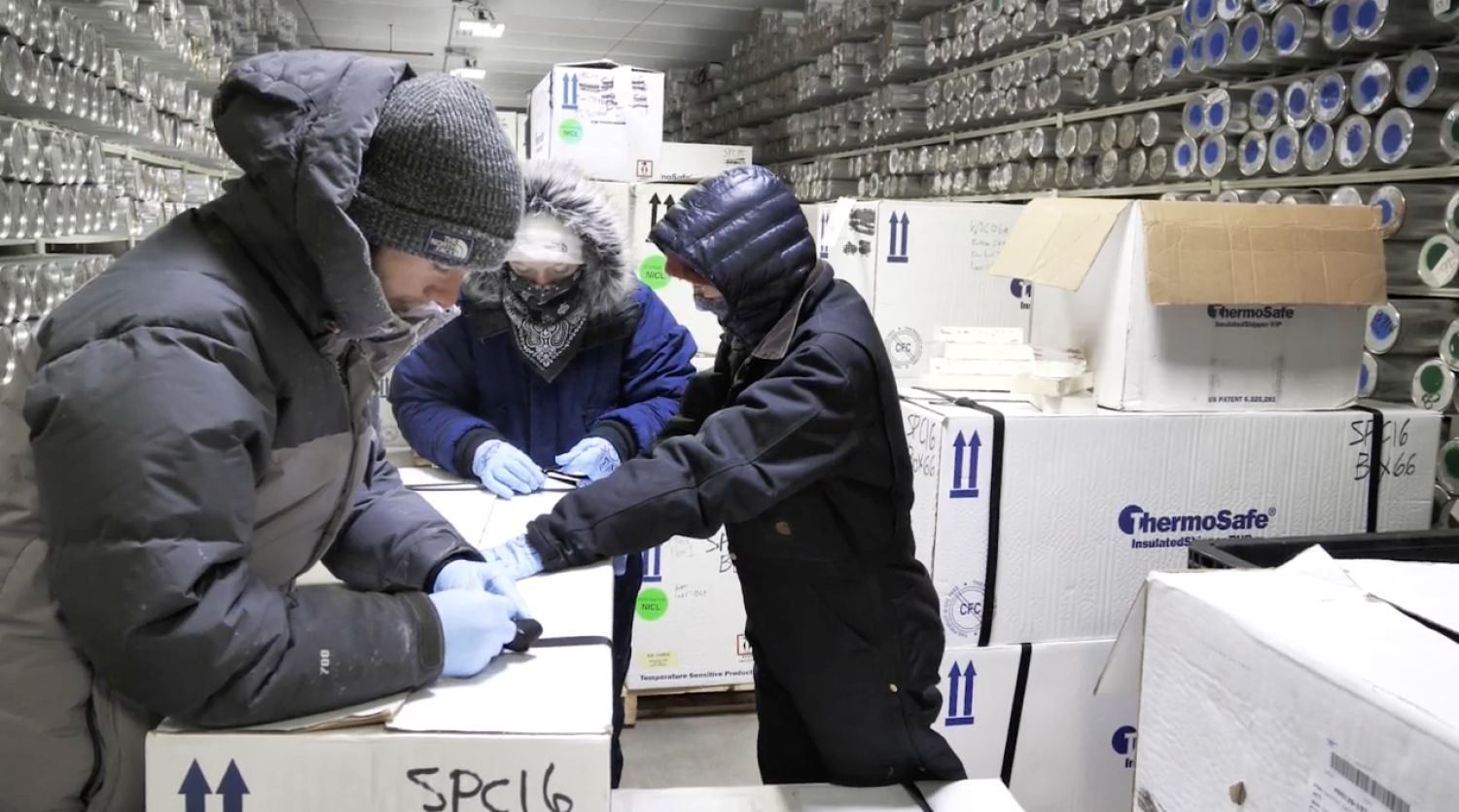 In celebration of Earth Day’s 51st anniversary, CU Boulder Today explores 10 research-related discoveries that have the potential to positively change the way we live and soften humanity’s imprint on our precious planet. END_OF_DOCUMENT_TOKEN_TO_BE_REPLACED

By looking at this newly emerged bird, a CU Boulder-led research team found an ‘evolutionary shortcut’ for speciation. END_OF_DOCUMENT_TOKEN_TO_BE_REPLACED
Return to the top of the page