Discovery could lead to fewer side effects, better results for cancer patients

More than half of cancer patients undergo radiotherapy, in which high doses of radiation are aimed at diseased tissue to kill cancer cells. But due to a phenomenon known as radiation-induced bystander effect (RIBE), in which irradiated cells leak chemical signals that can travel some distance to damage unexposed healthy cells, many suffer side effects such as hair loss, fatigue and skin problems. This bystander effect may also make targeted cells resistant to radiation treatment, research suggests. 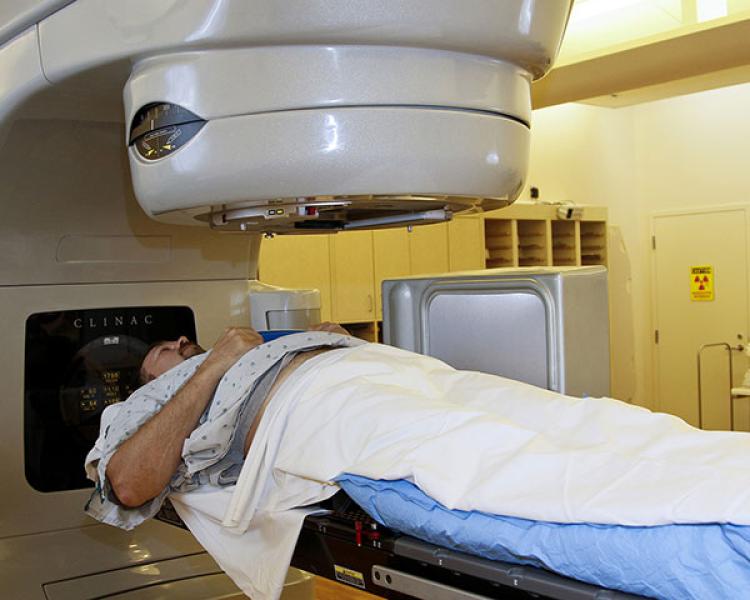 A CU Boulder study published today in the journal Nature sheds new light on the precise mechanism behind RIBE, identifying both a protein released by irradiated cells and the pathway it takes to influence healthy ones. Ultimately, researchers hope it could lead to a medication patients could take before radiation treatment.

“Inhibiting RIBE would allow doctors to kill two birds with one stone,” said lead author Ding Xue, a professor of molecular, cellular, and developmental biology at CU Boulder who collaborated with colleagues in China, Taiwan and Japan for the study. “We could minimize the bad effects of radiotherapy on healthy bystander cells, and at the same time, enhance cancer cell killing by radiotherapy.”

Nine years in the making, the study used a translucent, 1,000-cell worm called C. elegans as a model to study the bystander effect in action.

First, to be sure RIBE occurred in C. elegans, researchers exposed a population of the worms to radiation, then took a medium secreted by the C. elegans cells and bathed healthy C. elegans in it. The once-healthy animals began to show increased embryo deaths and other signs of RIBE.

The researchers then systematically treated the medium with agents designed to destroy proteins, DNA, and RNA, in order to determine which may be a key compound at play in RIBE. When the medium was treated with a protease, which breaks down proteins, C. elegans exposed to it did not show signs of RIBE. 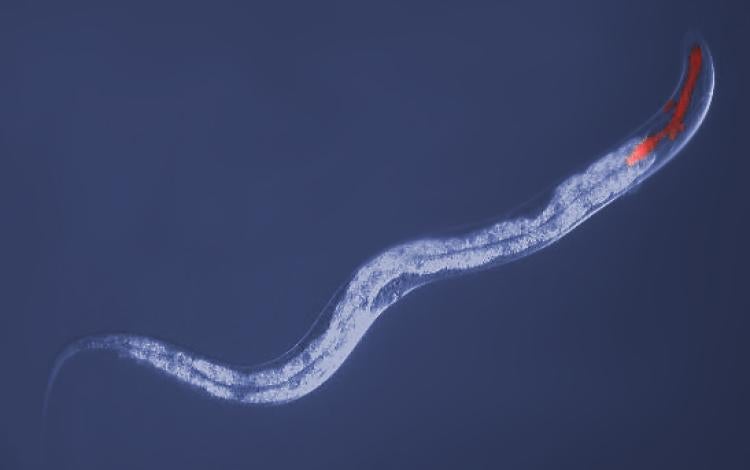 C. elegans under the microscope. The area in red has been exposed to radiation. Credit: Ding Xue

Once researchers discovered that the agent causing RIBE was a protein, they used a technique called mass spectrometry to establish which proteins present in the medium were at play. A protein called CPR-4—the C. elegans version of a human protease called cathepsin B—emerged as the prime candidate. Cathepsin B is known to be a biomarker in several types of cancer.

Then researchers studied which biological pathway enabled CPR-4 to signal changes in healthy cells that were never exposed to radiation. They identified a pathway mediated by the insulin-like growth factor receptor DAF-2.

The study also found that a tumor suppressor gene called P53 may be at play in RIBE, prompting cells to produce more of the damaging CPR-4 protein when a cell is exposed to radiation.

“This is basically the first comprehensive study to identify the factor and mechanisms behind this radiation-induced bystander effect in animals,” said Xue, who hopes to work with other researchers in the future to identify other RIBE factors and mechanisms and help develop drugs that inhibit them.

“We are excited about these findings and believe they could have broad implications for patients as well as other important areas such as radiation protection and radiation safety,” he said.

A new genetic analysis, using data from hundreds of thousands of people, sheds light on why more than half of people diagnosed with one psychiatric disorder will be diagnosed with a second or third in their lifetime. END_OF_DOCUMENT_TOKEN_TO_BE_REPLACED

In the wake of this week's leak about a private Supreme Court vote to strike down Roe v. Wade, CU Boulder sociologist Amanda Stevenson discusses how such a ruling could impact women's mortality and the way they live their lives. END_OF_DOCUMENT_TOKEN_TO_BE_REPLACED
Return to the top of the page