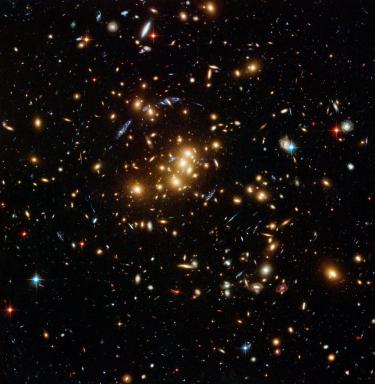 Two galaxy clusters in the process of merging created a layer of surprisingly hot gas between them that University of Colorado Boulder astronomers believe is from turbulence caused by banging into each other at supersonic speeds.

The two clusters, which are coming together to create the larger galaxy cluster Abell 115, are located some 2.4 billion light years away. The turbulent area of hot gas sandwiched between the two clusters, which CU Boulder Professor Jack Burns likened to a wake behind a motorboat, is about 300 million degrees Farhenheit. That is roughly three times as hot as the two smaller cluster cores and 10 times hotter than the core of the sun, said Burns, lead study author.

“We did not expect to see such very hot gas between the cluster components,” said Burns. “We think the turbulence is like a big spoon stirring up gases, converting the energy of motion from the merging clusters into thermal energy. It is a manifestation of them banging together like two giant pots, something we have not really seen before.”

Burns presented the new findings in a press briefing on Tuesday, June 6, at the 230th Meeting of the American Astronomical Society being held in Austin, Texas, June 4–8.

The two merging galaxy clusters individually consist of hundreds of galaxies, each as large or larger than our own Milky Way galaxy, said Burns of CU Boulder’s Center for Astrophysics and Space Astronomy (CASA). Individual galaxy clusters, which can include thousands of galaxies, are the largest gravitationally bound objects in the universe.

“Energetically speaking, galaxy cluster merging events are the biggest bangs in the universe since the Big Bang,” said Burns. “These are massive, very dynamic systems that continue to evolve to this day.”

The team’s computer simulations show regions of relatively cool gas near the cores of each merging cluster, indicating the two objects have encountered each other before—perhaps circling a few times and stripping gas from one another before merging.

To analyze temperatures within Abell 115 and other similar merging clusters, Burns and his team developed software to produce high-contrast temperature maps of all cluster regions in both the X-ray and radio portions of the electromagnetic spectrum. The new data pipeline uses the NASA Ames Research Center supercomputer to calculate 10,000 to 100,000 spectra in each cluster, said Burns.

The team is continuing to investigate the radio emissions stretching far outside Abell 115 into the intergalactic medium, including their relationship to the hot X-ray gas.

“These radio emissions are caused by electrons in the magnetic field of the galaxy cluster traveling at near the speed of light,” said Burns. “Clearly something has energized the electrons, which we think is related to the cluster banging process.”

As part of the project, the CU Boulder team is studying a sample of 50 other galaxy clusters for comparison, said Burns.

What’s next for Abell 115? “Our computer simulations show these cluster mergers can be really complicated in terms of the accretion process, depending on the state we catch them in,” said Burns. “We believe Abell 115 will eventually ‘relax’ and become centrally condensed, which is relatively boring compared to what we are seeing now.”

Galaxy clusters form in what is known as the universe’s cosmic web, said Burns. The cosmic web consists of long, narrow filaments of galaxies and intergalactic gas separated by enormous voids. Astronomers believe single cosmic web filaments can stretch for hundreds of millions of light years, an astonishing length considering a single light-year is about 5.9 trillion miles.

A new NASA report shows that the University of Colorado Boulder is the top university recipient of NASA astrophysics technology grants. END_OF_DOCUMENT_TOKEN_TO_BE_REPLACED

CU Boulder has been selected as a member of the United States Space Command Academic Engagement Enterprise, a new national program designed to expand collaboration and academic exchanges between universities and Space Command. END_OF_DOCUMENT_TOKEN_TO_BE_REPLACED

Since July 2022, a miniature satellite about the size of a shoebox has been orbiting Earth and monitoring how much solar energy reaches the atmosphere, one of the "most important" Earth science measurements. Now, scientists are finalizing their analysis of the first five months of the testing. END_OF_DOCUMENT_TOKEN_TO_BE_REPLACED
Return to the top of the page