What a baby hears while asleep matters more than previously thought

What an infant hears during sleep has an immediate and profound impact on his or her brain activity, potentially shaping language learning later in life, suggests a new University of Colorado Boulder study of slumbering babies.

“We found that even while babies sleep, they are still processing information about their acoustic environment, and their brains are using that information to develop pathways for learning,” said lead author Phillip Gilley, PhD, principal investigator of the Neurodynamics Laboratory at the Institute of Cognitive Science (ICS). (Listen to Gilley talk about the research.)

Research dating back to the 1970s suggests that newborns can already recognize their mother’s voice. What has remained unclear, however, is how early, and to what degree infants can distinguish between the rapid-firing sounds—such as long or slow vowels or consonants—that serve as the building blocks of human language.

The science of sleeping babies

To find out, Gilley and his colleagues enlisted the parents of 24 healthy infants under the age of 5 months to bring their newborns to a lab. Each infant had electroencephalogram (EEG) electrodes attached to their heads, then fell asleep. Researchers tested sleeping infants because they are more still and infants spend up to 80 percent of their time asleep. A speaker nearby played a sequence of repeated sounds—“ah, ah, ah” or “bah, bah, bah”—interspersed with an occasional oddball sound—“eeh” or “dah,” respectively. Meanwhile, EEG measured the child’s brainwaves. 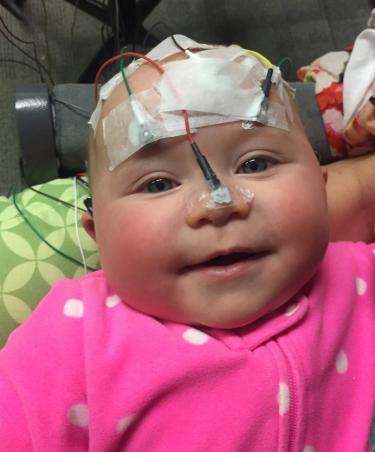 An infant prepares for EEG testing. Small sensors are placed on the infant’s head, which allows researchers to see changes in the infant’s brain activity while listening to sounds. Credit: Elyse Tierney.

Afterward, Gilley used an algorithm developed in his laboratory to identify and measure these different brain patterns.

The findings, published in March in the journal BMC Neuroscience, came as a surprise.

When the “standard” sound hummed along—ah, ah, ah—the infant’s brainwaves remained primarily in  a theta, or low frequency, wave. But within a few milliseconds of hearing the oddball sound the brainwave pattern shifted to a complex blend of gamma, beta and theta frequencies, a signal of neurons in different regions of the brain oscillating and harmonizing.

In essence, the brain quickly learned what the expected sound was, anticipated it, and reacted with surprise to a different one. In the process, Gilley notes, new neuronal pathways key to discriminating sounds were likely formed. That’s important, because knowing how to discriminate between distinct sounds is key to learning speech and language.

“The most surprising finding here is how quickly these infants’ brains are able to make those predictions. Within the span of one test, their brain learns a pattern and begins to respond to it.”

The paper is the first of a series the group will be rolling out as part of a five-year, multi-center grant from the National Institute on Disability, Independent Living, and Rehabilitation Research.

The goal is twofold: To use EEG to better understand precisely when and how a child’s brain begins to process sound; and to aid development of better diagnostic tests.

Today, while EEG is used to determine—at the brainstem level—whether a newborn responds to sound, it can’t show how well they distinguish between sounds. That can make it hard to tune hearing aids for babies with hearing loss. Studies show 50 percent of hearing aids may not be properly calibrated for young children.

“Within the next five years, a clinician could put a few small sensors on a newborn’s head for less than 30 minutes and detect not only that an infant can hear speech, but also how well they tell the difference between speech sounds,” says Gilley.

What should infants be listening to? It’s too early to say, Gilley notes, although he admits to preferring ocean sounds and other soothing repetitive sounds for his children. Gilley does recommend that if a child has a hearing impairment, they wear their hearing aids as much as possible.

“Otherwise, they may be missing out on essential environmental sounds that help their brain to learn.”

Kristin Uhler, an assistant professor at the CU Anschutz School of Medicine, Kaylee Watson, a doctor of audiology candidate in the CU Boulder department of Speech, Language, and Hearing Sciences, and Christine Yoshinaga-Itano, a professor with ICS, co-authored the study.

Seventy-eight years ago on Jan. 27, the Auschwitz concentration camp closed after liberation by the Soviet army. Professor Janet Jacobs, who researches genocide, trauma and collective memory, discusses the ways in which the experiences and trauma of Holocaust survivors are passed down through generations. END_OF_DOCUMENT_TOKEN_TO_BE_REPLACED

A model of your very own kidney made entirely from soft and pliable polymers? Researchers at two CU campuses are on the cusp of 3D printing realistic replicas of human anatomy. END_OF_DOCUMENT_TOKEN_TO_BE_REPLACED

Legalizing recreational cannabis does not increase substance use disorders or use of other illicit drugs in adults and may reduce alcohol-related problems, according to new research. The study also found no link between cannabis legalization and increases in cognitive, psychological, social, relationship or financial problems. END_OF_DOCUMENT_TOKEN_TO_BE_REPLACED
Return to the top of the page