Published: May 5, 2017 • By Colorado Arts and Sciences Magazine

Stephanie and Sarah Meyers, graduating with degrees in international affairs, haven’t had to wonder how they’ll pay next semester’s tuition. Some of their friends are less fortunate, and the two University of Colorado Boulder students have done something to help such students stay in college.

With a $30,000 gift from their family foundation, they established the Meyers Family Foundation Scholarship Fund, which aims to support one or two first-year students annually. The scholarships will be awarded to students who have financial need, and recipients will be eligible to renew the scholarships each year so long as they maintain a minimum grade-point average of 2.7.

"My daughters came up with the idea of a scholarship, which I thought was a great idea," Pat Meyers said.

The twin sisters’ personal experiences drove the specification that scholarship recipients will be able to renew each year. "We have a lot of friends who are on financial aid and know how hard it is to come up with tuition. Even if it is only a few-thousand dollars every single year, if you take away that scholarship after the first year, it’s really hard for them to come up with that money," Stephanie Meyers said.

The goal is to help students stay in school and get their degrees, because, Sarah Meyers said, "In the job world, you have to have a college degree."

"A lot of people take it for granted that we have the opportunity to go to college here, but most people don’t," Stephanie Meyers said, adding that without scholarships, "super-smart" students they knew in high school would have been unable to afford college.

The sisters were drawn to international affairs because they’ve always shared an interest in culture, traveling and particularly international development.

"They exemplify the generosity, motivation and thoughtfulness of our wonderful students," Director of the International Affairs Program Thomas Zeiler commented. "The Meyers family has made it possible for those with financial needs to attend CU Boulder and perhaps follow in the footsteps of Stephanie and Sarah in IAFS!"

Visit the Colorado Arts and Sciences Magazine online to read the full story. 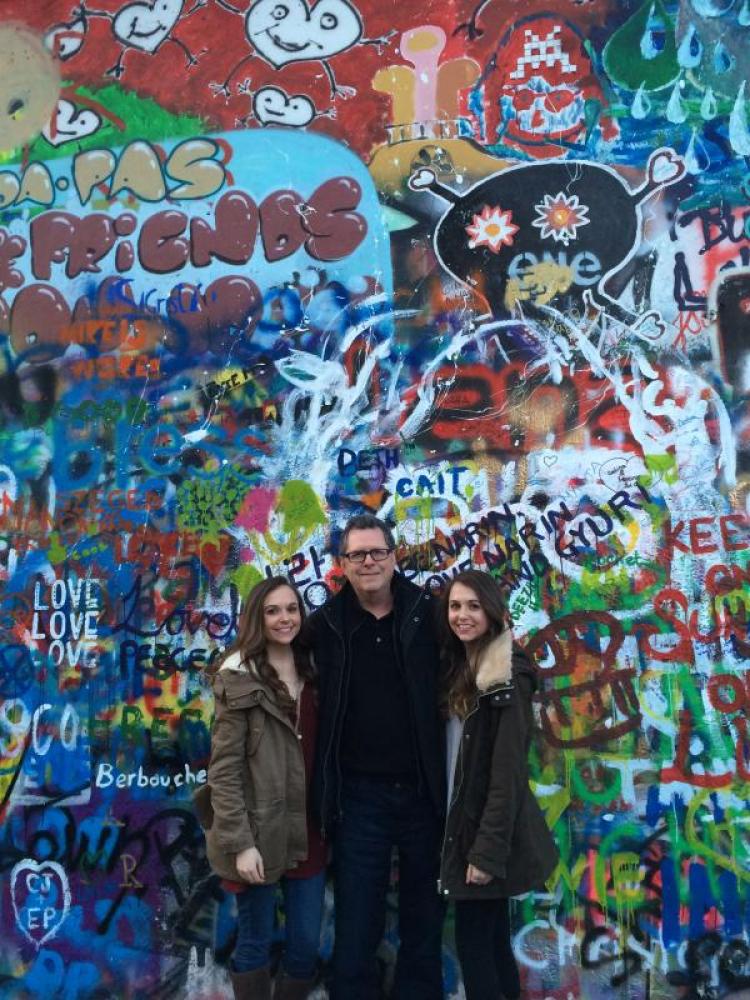 Sarah, Pat and Stephanie Meyers at the John Lennon Wall in Prague

Sarah Luettgen is building a future as an aerospace professional, studying the space domain of satellite orbits in the extreme upper reaches of Earth’s atmosphere. END_OF_DOCUMENT_TOKEN_TO_BE_REPLACED

Buffs soccer captain Hannah Sharts talks about playing every minute, scoring as a defender and how she’s using her name, image and likeness to help promote female student-athletes. END_OF_DOCUMENT_TOKEN_TO_BE_REPLACED
Return to the top of the page