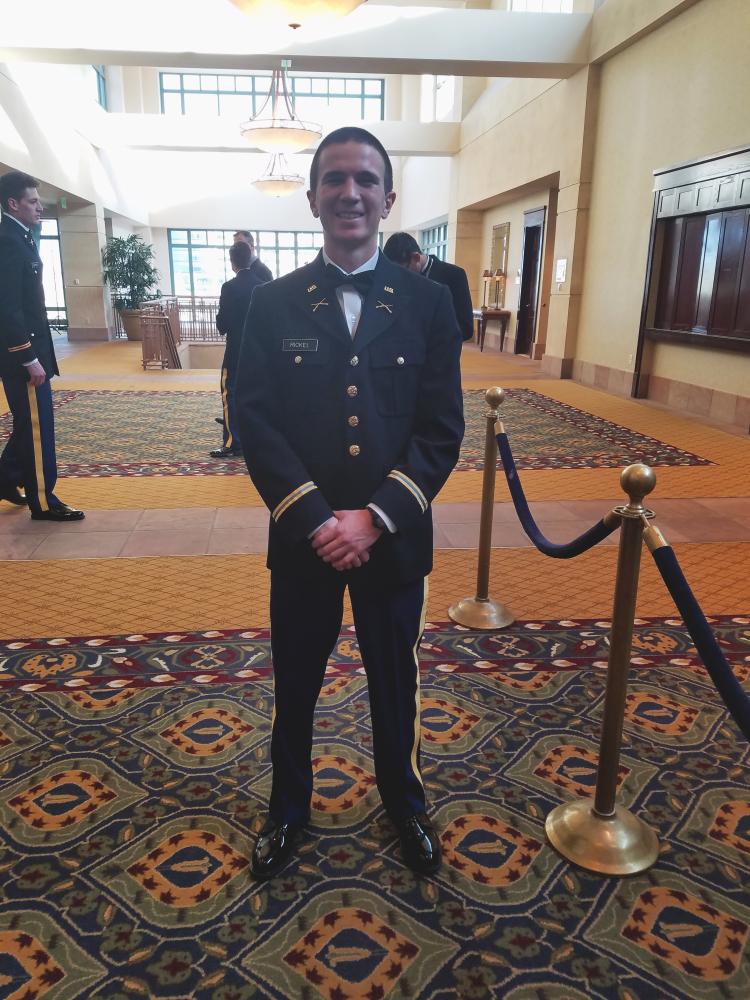 Ever since he was a child growing up in Ukiah, California, Lonnie Rickel has wanted to be in the military. Growing up in a family with limited funds, he planned on enlisting in the Army and never really thought seriously about college.

"I am from a fairly poor background, so I didn't think I would attend college," Rickel said.

That all changed in seventh grade when he was chosen to participate in Partnership Scholars, a California-based program that helps students who have the drive and academic excellence, but not the funds, to attend college. As part of the program, he committed to attending a four-year college when he was in seventh grade and was paired with a mentor through middle and high school.

"I came to visit CU as a sophomore in high school and fell in love right away. I applied my senior year and was lucky enough to get in."

The mountains and the outdoors were a big draw, he said, but so was the astrophysics program. "We have one of the best physics programs in the country, so it's been great to be a part of it," he said.

For Rickel, coming to CU Boulder was the best of both worlds. He wanted to have a college experience and be in the military, so he joined the ROTC program right away when he came to campus. He started doing physical training on day one and was offered a four-year scholarship after his first semester.

Through the ROTC program he learned a lot about leadership and about himself. The program put him in positions where he was uncomfortable—cold and miserable—and he had to make decisions under those conditions.

"ROTC has been great. It really challenged me and helped me grow as a leader," he said. "The Army for me was a second major. It's been a lot of work and responsibility, but I'm glad I was able to have those opportunities."

His next goal, once he is commissioned, is to become a platoon leader.

"Lonnie has been an outstanding cadet and is certain to excel as an Army infantry officer," said Lt. Col. Aaron Roof, professor of military science at CU Boulder. "I’ve never met a more driven, caring and diligent young man."

Rickel will report to Fort Benning Georgia on May 26 to begin Infantry Basic Officer Leader Course, where he will learn the tactics, techniques and procedures needed to be an infantry officer. He hopes to also continue on to Ranger School and then to a unit, where he can utilize his leadship skills as an officer.

As a mentor to both high school and college students, Rickel's advice is to branch out.

"There are a lot of hidden opportunities out there and all it takes is a little bit of looking to find them. The opportunities are here for you if you look for them, but they aren't going to come find you."

Sarah Luettgen is building a future as an aerospace professional, studying the space domain of satellite orbits in the extreme upper reaches of Earth’s atmosphere. END_OF_DOCUMENT_TOKEN_TO_BE_REPLACED

Buffs soccer captain Hannah Sharts talks about playing every minute, scoring as a defender and how she’s using her name, image and likeness to help promote female student-athletes. END_OF_DOCUMENT_TOKEN_TO_BE_REPLACED
Return to the top of the page