Long-term fate of tropical forests may not be so dire

Long-term fate of tropical forests may not be so dire

Tropical rainforests are often described as the “lungs of the earth,” able to essentially inhale carbon dioxide from the atmosphere and exhale oxygen in return. The faster they grow, the more they mitigate climate change by absorbing CO2.

This role has made them a hot research topic, as scientists question what will happen to this vital carbon sink long-term as temperatures rise and rainfall increases.

Our findings fundamentally change a view of the tropical forest carbon cycle that has been published in textbooks and incorporated into models of future climate change for years."

Conventional wisdom has held that forest growth will dramatically slow with high levels of rainfall. But CU Boulder researchers this month turned that assumption on its head with an unprecedented review of data from 150 forests that concluded just the opposite.

“Our data suggest that as large-scale climate patterns shift in the tropics, and some places get wetter and warmer, forests will accelerate their growth, which is good for taking carbon out of the atmosphere,” said Philip Taylor, a research associate with the Institute of Arctic and Alpine Research (INSTAAR). “In some ways, this is a good-news story, because we can expect greater CO2 uptake in tropical regions where rainfall is expected to increase. But there are a lot of caveats.”

Ecologists have long thought that forest growth follows a hump-shaped curve when it comes to precipitation: To a point, more rainfall leads to more growth. But after about 8 feet per year, it was assumed too much water can waterlog the ecosystem and slow the growth rate of forests. While working in the Osa Peninsula of Costa Rica, Taylor, who got his doctoral degree in ecology and evolutionary biology at CU Boulder, began to question this assumption.

“Here we were in a place that got 16 feet of rain per year, and it was one of the most productive and carbon-rich forests on Earth. It clearly broke from the traditional line of thinking,” he said.

Intrigued, Taylor spent four years synthesizing data on temperature, rainfall, tree growth and soil composition from rainforests in 42 countries, compiling what he believes is the largest pan-tropical database to date.

The study, published recently in the journal Ecology Letters, found that cooler forests (below 68 degrees F on average), which make up only about 5 percent of the tropical forest biome, seemed to follow the expected hump-shaped curve. But warmer forests, which are in the majority, did not. 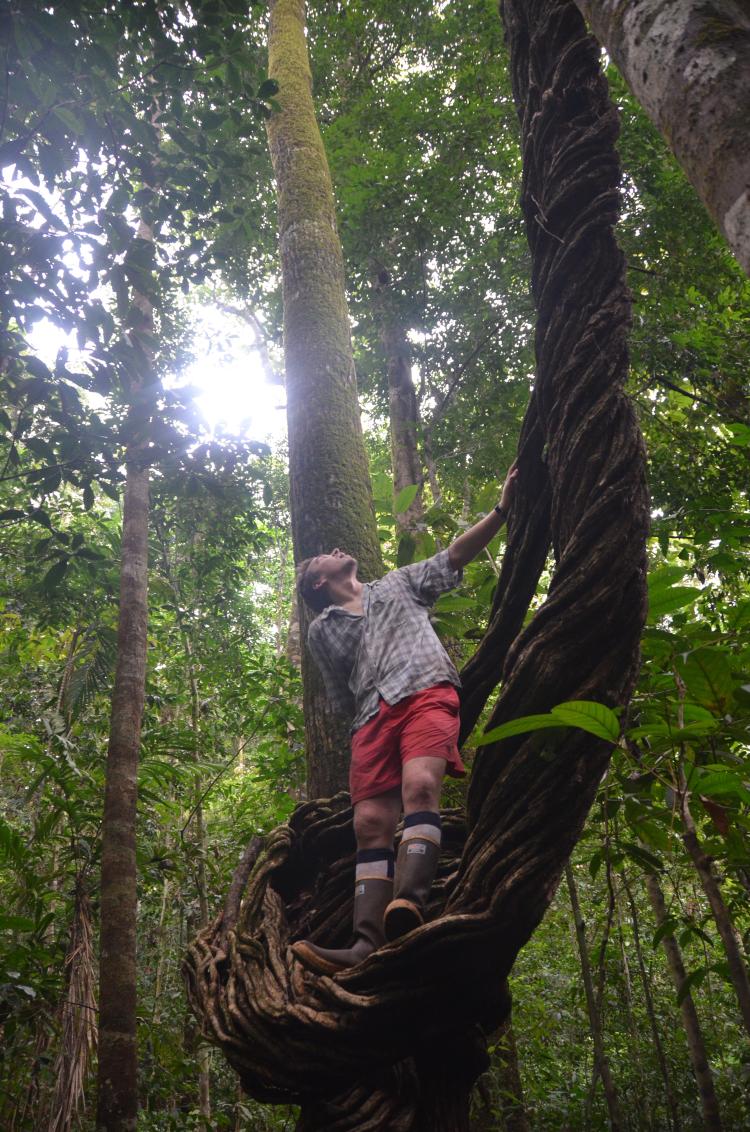 Philip Taylor measures the growth rate of a tropical giant, the Ajo, on the Osa Peninsula in Costa Rica. The trees can grow to 180 feet tall and can live 1000 years.

“The old model was formed with a lack of data from warm tropical forests,” said Taylor, who describes such remote, often uninhabited forests as among the “final frontiers” of scientific exploration. “It turns out that in the big tropical forests that do the vast majority of the ‘breathing’ the situation is flipped. Instead of water slowing growth down, it accelerates it.”

Taylor cautioned this does not mean climate change won’t negatively impact tropical forests at all. In the short term, research has shown, droughts in the Amazon Basin have already led to widespread plant death and a 30 percent decrease in carbon accumulation in the past decade.

Because the carbon cycle is complex, with forests also releasing carbon into the atmosphere as plants die, it’s still impossible to say what the net impact of a wetter climate might mean for the forest’s ability to sequester carbon, said senior author Alan Townsend, a professor of environmental studies.

“The implications of the change still need to be worked out, but what we can say is that the forest responds to changes in rainfall quite differently than what has been a common assumption for a long time,” said Townsend.

Going forward, the authors hope the findings will set the record straight for educators and scientists.

“Our findings fundamentally change a view of the tropical forest carbon cycle that has been published in textbooks and incorporated into models of future climate change for years,” said Taylor. “Given how much these forests matter to the climate, these new relationships need to be a part of future climate assessments.”

Mitigating climate change by significantly reducing carbon emissions this decade will require big transitions in all sectors, from energy and transportation to construction and industry. But significant reductions in global emissions are possible, experts say. END_OF_DOCUMENT_TOKEN_TO_BE_REPLACED

Clint Carroll, associate professor in the Department of Ethnic Studies, studies Cherokee access to gathering wild plants and land use management, and tends to the land in his own backyard. END_OF_DOCUMENT_TOKEN_TO_BE_REPLACED

With the planet already warming, technical fixes to addressing a changing climate are important, experts say, but they can only get us so far. We need social fixes, too. END_OF_DOCUMENT_TOKEN_TO_BE_REPLACED
Return to the top of the page