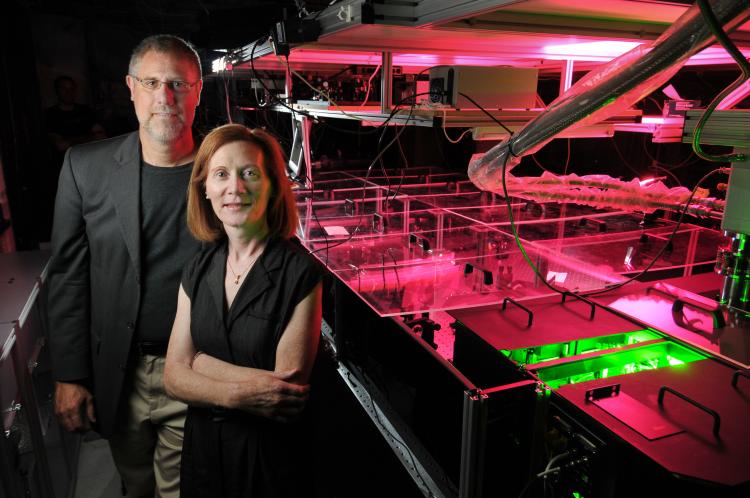 Physics Professors Margaret Murnane, right, and Henry Kapteyn of JILA with a laser apparatus in their laboratory on campus on Aug. 25, 2010.

As Congress determines the funding levels for the federal science agencies for fiscal years 2017 and 2018, a new report highlights 102 spin-off companies—three from the University of Colorado Boulder—that demonstrate how investments in basic scientific research benefit the overall economy.

The study, American-Made Innovation, Sparking Economic Growth, was released by the Science Coalition, a nonprofit, nonpartisan organization of more than 50 of the nation’s leading public and private research universities. It is dedicated to sustaining the federal government’s investment in basic scientific research as a means to stimulate the economy, spur innovation and drive America’s global competitiveness.

The new report identifies 102 companies that exist because academic researchers had access to competitively awarded grants from agencies under consideration to receive cuts in current White House budget proposals. These agencies include the National Institutes of Health, National Science Foundation, Department of Energy, Department of Agriculture and the National Institute of Standards and Technology.

"The companies recognized in this report are among those we’re most proud of and they demonstrate just a fraction of the impact of the university’s collaborations with federal agencies and our partners in industry and the community," said Vice Chancellor for Research & Innovation Terri Fiez. "Collectively, we serve as a powerful engine for innovation and economic impact in Colorado and across the country."

The total public investment in the foundational research behind the 102 companies was just over $265 million spread over several decades. The companies employ 8,900 workers in communities across the country. They are paying taxes, purchasing materials, equipment and services, and otherwise contributing to their local economies.

According to the new report, the initial federal research investment is small. Eighty percent of the companies in the report cited less than $5 million as the amount of federal funding received for their foundational work. For 40 percent of companies, this amount was less than $1 million.

The 102 companies highlighted are predominantly small businesses, like most companies in the United States. Sixty-five percent of companies have fewer than 100 employees. But the companies still collectively employ 8,900 people.

In addition, two other CU Boulder spin-off companies were highlighted in previous reports by the Science Coalition. They are:

A collaborative study, including CU Boulder associate professor Andrew McAdam, investigates how the risks and rewards of red squirrel reproduction are a microcosm of evolutionary patterns. END_OF_DOCUMENT_TOKEN_TO_BE_REPLACED

What happens when an expert on natural language processing asks a chatbot to write a children's book in the style of Dr. Seuss? Professor Kai Larsen put the question to the test. END_OF_DOCUMENT_TOKEN_TO_BE_REPLACED

A model of your very own kidney made entirely from soft and pliable polymers? Researchers at two CU campuses are on the cusp of 3D printing realistic replicas of human anatomy. END_OF_DOCUMENT_TOKEN_TO_BE_REPLACED
Return to the top of the page