A Whittier student uses a green frame to show that she likes the sign being low enough for children to read it. Students used green and red frames to show the things they liked and didn’t like about the bus stop space.

After completing a four-month study, students at Whittier International Elementary School have decided what's important to them when riding the bus: riding independently, having a place to sit while they wait and enjoying "fun and interesting" experiences.

On April 27, the second-grade English language learners involved in the project will see the installation of some of their recommendations. Their participation was part of the public outreach stage of the city of Boulder's HOP Transit Study, which gathered suggestions to revitalize the HOP bus experience and address changes in land use and transportation since the HOP's inception 22 years ago.

The children were involved in the process through Growing Up Boulder (GUB), a youth-friendly initiative involving community-based participatory design education and research at CU Boulder's Community Engagement, Design and Research Center (CEDaR). CEDaR is housed in the Environmental Design Program. 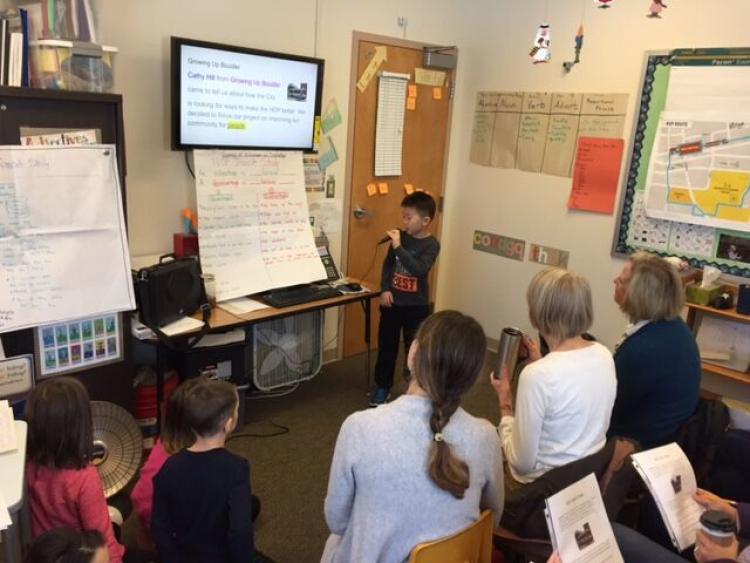 A student presents input to city of Boulder staff and Growing Up Boulder representatives.

What's unusual is that cities don't often consider children's perspectives in planning and implementing urban improvements, says Mara Mintzer, coordinator of GUB. Studies show that children who grow up in cities often feel alienated from their environments. But if the cities meet the needs of young people, they grow up feeling connected and thrive.

"Growing Up Boulder is a model program for the country," she says.

Boulder has invested long-term in its commitment to listening to children's input in city planning, says Louise Chawla, professor emerita of environmental design and co-author and editor of the book Growing Up in an Urbanising World.

When city officials listen to the ideas of children, "There is a new sense of self-esteem for the children, recognizing that they have value," Chawla says. "I have seen that again and again and it's very powerful."

It's also a relationship that benefits the city, she says.

"It's changing the culture of city decision making," she says. "There's a recognition that young people's ideas are often innovative, people friendly and playful, and incorporating their ideas adds to the city’s vitality and character."

Whittier students recommended lowering bus signs to "kid-level" so children can read them, placing a bench at the 20th and Pearl Street bus stop, the closest HOP stop to their school, and installing interesting artwork made by children. Local artist Shari Southard worked with the students to create the artwork.

"All three bus stop improvements reflect student values, and each recommendation helps support the HOP bus in being a more child- and family-friendly place," Mintzer says.

Helping children have a voice

As a CEDaR volunteer, ENVD senior Natalia Marroquin helped the Whittier students critically think about how the HOP system could be improved.

"I was interested in this project because English was my second language and I remember being unable to communicate ideas due to the language barrier," says Marroquin, a native of El Salvador who came to the United States in 2007. "My intent was to help Spanish-speaking students communicate their ideas and findings to ensure they were taken into consideration."

I was interested in this project because English was my second language and I remember being unable to communicate ideas due to the language barrier," says Marroquin, a native of El Salvador who came to the United States in 2007. "My intent was to help Spanish-speaking students communicate their ideas and findings to ensure they were taken into consideration."

Through the experience, Marroquin says she learned how children interpret their environment and process information differently from adults. She also said she was impressed by the level of detail Growing Up Boulder and the children's teachers incorporated into the process.

As part of the project, the students learned how to advocate for their recommendations, writing persuasive letters to GO Boulder, which works to create innovative transportation options for Boulder residents

They also presented to city officials. The project combined GUB's participatory design methods with Jane Goodall's Roots & Shoots curriculum, which "places the power and resources for creating practical solutions to big challenges in the hands of the young people."

"GO Boulder listened to the students' ideas about ways to make the HOP more comfortable, safe and fun," says Natalie Stiffler, a transportation planner with the city of Boulder Transportation Division. "The students' input and ideas will be thought about and incorporated into future city transit projects."

GUB serves an average of 200 to 300 children and engages more than 100 CU Boulder students each year. It often involves underrepresented children and their families. For this project, GUB partnered with Whittier Elementary and the city's GO Boulder team to engage underrepresented students ages 7 to 8. The HOP study included 12 second-grade English language learners from Whittier Elementary and two CU Boulder environmental design students.

"Growing Up Boulder is about creating democracy and civic engagement," Mintzer says. "It's about leveling the playing field and giving those who don't otherwise have a voice a seat at the table."

In another GUB program, Boulder's Spine Pedestrian Bridge along the Civic Area's 11th Street will open to the public today. Many of the bridge's design features were inspired by ideas from students in the I Have a Dream program, as well as students at Whittier, New Vista High School, Boulder High School, Casey Middle School and Boulder Journey Schools.

"GUB is about motivating children to practice writing and speaking and learning advocacy skills," Mintzer says, "In short, children going through the Growing Up Boulder program learn that their voices can evoke change. They become community leaders at a young age." 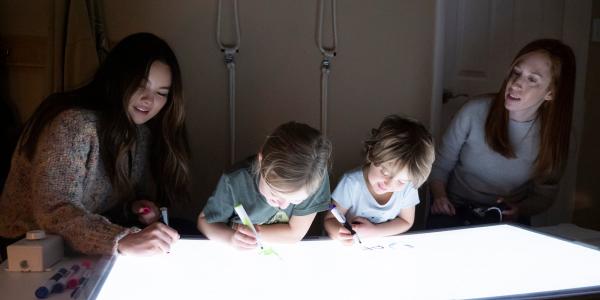 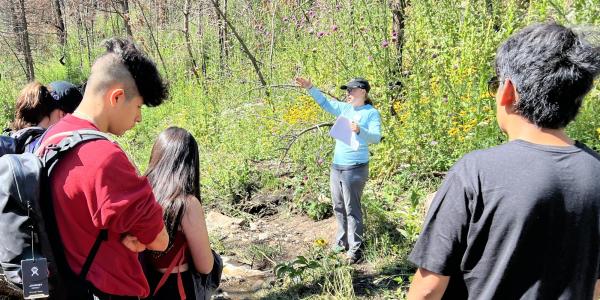 CU Science Discovery, a K–12 education outreach organization, recently received two statewide awards in recognition of its efforts and achievements in STEM and environmental education. END_OF_DOCUMENT_TOKEN_TO_BE_REPLACED
Return to the top of the page