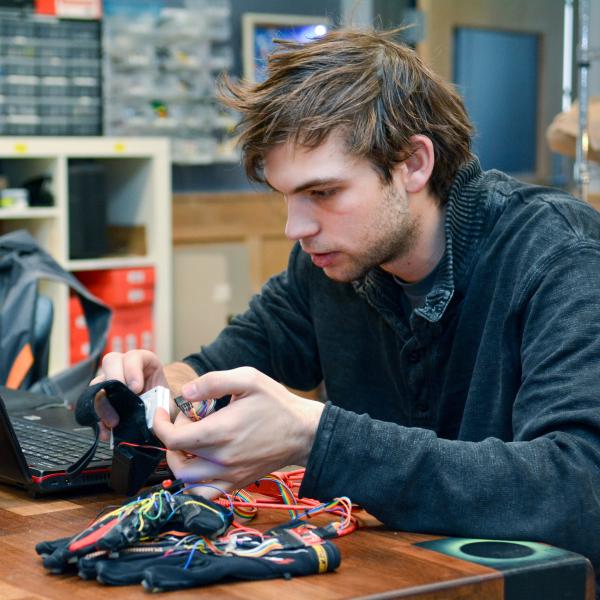 After struggling to find his place in engineering and math, Kristof Klipfel discovered the creative outlet he craved in the Technology, Arts and Media program at the ATLAS Institute at CU Boulder.

Since changing his major for the third time, the senior is consistently cranking out innovative work that demonstrates his active imagination.

“Engineering and math were cool, but not my thing,” Klipfel said. “I can do computer science, engineering, music, art and more. I consider myself a culmination of all these, but I don’t classify myself as a single one.”

Once he was in the TAM program, it didn’t take long for Klipfel to hit his stride. He will present two of his innovative projects at a Tangible, Embedded and Embodied Interactions conference in Yokohama, Japan, later this month.

In one of these projects, he turned a pair of gloves—purchased at a local thrift store—into a music-making device that allows users to compose, produce and record music. The gloves turn any surface or gesture into a piano keyboard. Or a drum set. Or a violin. Or any number of other musical instruments and sounds with the flick of a wrist or tap of a finger. The possibilities are nearly limitless.

With the gloves, a user can map any type of instrumental sound to the gloves’ fingers and record and loop grooves and melodies in real time. By recording backgrounds and melodies and piecing together sections of music, an entire song can be created. The user can add or alter audio effects, including frequency, volume, pitch and panning, just by bending the fingers.

To the gloves he attached 15 sensors, eight buttons, two circuit boards and an LCD screen. On each fingertip is a pressure sensor that registers touches and taps to trigger notes. The sensors also set pitch and volume, based on the speed the finger is tapped. The music program receives MIDI signals, which can trigger any sound the user sets up in the program. The result is more organic and natural sounding music. 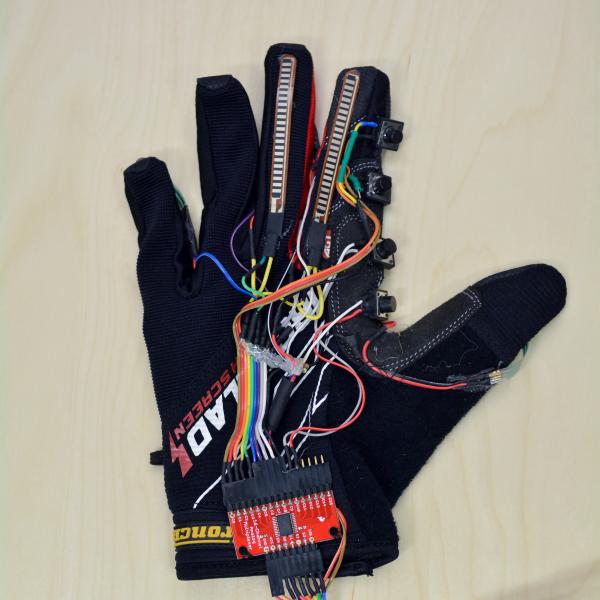 Four buttons on the side of each index finger correspond to controls in the program. There are buttons to stop or start, to undo, and rise or fall an octave, allowing the user to change the finger note values while playing.

Pressure sensors on the end of the gloves’ fingers provide velocity-sensitive touch. The harder they’re pressed, the louder the sound will be. Flex sensors on the back of the fingers act as potentiometers that add effects to the sounds being created. For example, users bend their fingers to slowly change the frequency or some other feature that can be defined in the music software.

The LCD screen attached to the circuit board allows a user to program the gloves to any scale in any key, such as major, minor, blues or pentatonic.

There are similar gloves on the market, but Klipfel’s prototype differs in significant ways.

“My set provides consistency and reliability because you have that tactile feedback and more functionality,” he said. “I wanted to be able to create music quickly without having to go back and forth between the gloves and the computer. This is a smoother process. I also want the gloves to eventually have the capability to draw or paint on any surface.”

With parents who are musicians, Klipfel was surrounded by music making from an early age. During high school, learning instruments became a hobby. Klipfel can play saxophone, percussion, piano, clarinet, trombone and tuba. And now he can play them on his gloves.

At the conference in Japan, Klipfel and graduate student Hyunjoo Oh will demonstrate PaperMech, a website and online repository of Oh’s doctoral study of design tools and techniques for combining paper crafts with mechanical design and electronic engineering. Klipfel led the development of a user-friendly website and design simulator.

The goal of this project is to support children and beginning designers to explore mechanical movements that can be used creatively with basic electronic components and common craft materials, such as paper, cardboard and lollipop sticks, to make kinetic crafts, objects or creations.

“My parents encouraged me to learn things on my own and to figure it out,” he said. “That gave me the confidence to know I can build anything I want.” 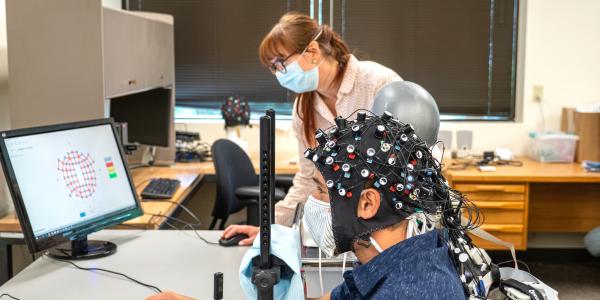 From learning how to best address COVID-19 to tackling the ever-expanding effects of our changing climate, CU Boulder faculty, staff and students will always be found at the leading edge of the issues that matter most. Enjoy these stories of resilience, collaboration and impact. END_OF_DOCUMENT_TOKEN_TO_BE_REPLACED 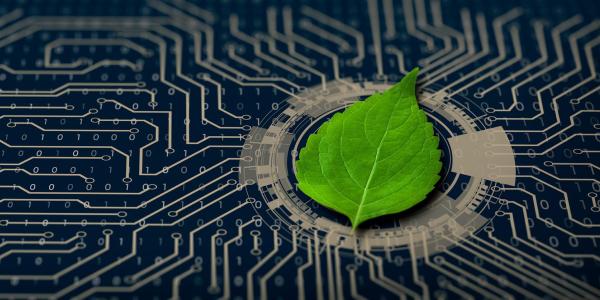 CU Boulder researchers work to transfer the ‘technology’ of biology

Several new faculty hires in CU Engineering have a deep interest in bio-inspired engineering. While they are all looking at different forms, functions and problems, their shared interests in the natural world could drive exciting new interdisciplinary projects and research areas. END_OF_DOCUMENT_TOKEN_TO_BE_REPLACED 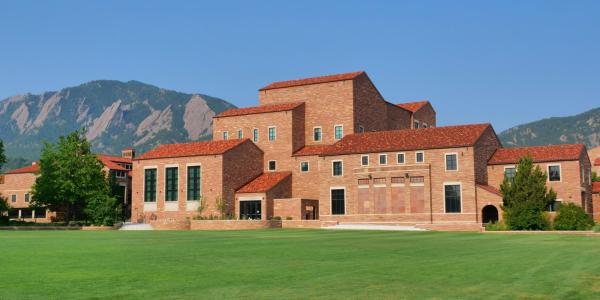 What distinguishes CU’s College of Music from other music schools? Ingrid Anderson, president of the College of Music Student Government, says a welcoming community and the support of non-traditional music careers set the college apart. END_OF_DOCUMENT_TOKEN_TO_BE_REPLACED
Return to the top of the page