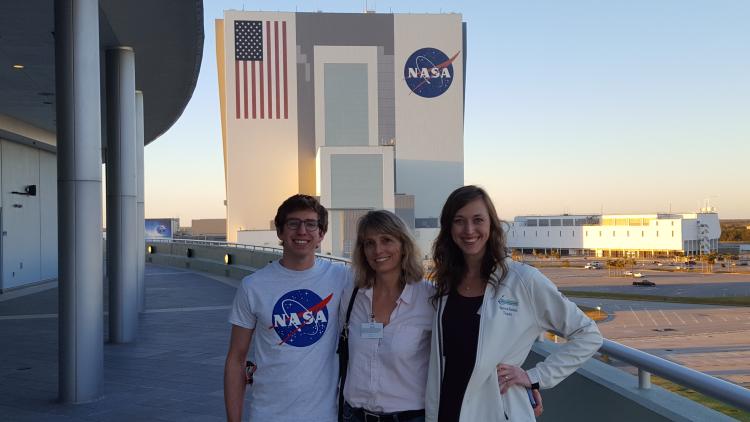 Several students are playing significant roles in the upcoming launch of a SpaceX rocket carrying two CU Boulder payloads – one designed to help researchers better understand and perhaps outsmart dangerous infections like MRSA, another to help increase the proliferation of stem cells in space, a potential boon for biomedical therapy on Earth.

Shelby Bottoms and Ben Lewis, both master’s students in the Ann and H.J. Smead Department of Aerospace Engineering Sciences, are in Florida for the upcoming launch of the SpaceX rocket carrying the CU Boulder-built payloads. Both are helping to assemble flight hardware designed and built by CU Boulder’s BioServe Space Technologies for the launch Feb. 18 to the International Space Station (ISS).

BioServe has built and flown over 100 payloads on more than 50 spaceflight missions.

Lewis said he came to CU Boulder from Rice University hoping to be involved in spaceflight projects.

“What I didn’t know was that I would be actually working on hardware that was going to fly on the International Space Station, which is really cool.”

Both Lewis and Bottoms are in aerospace engineering’s Bioastronautics program, which involves the study and support of life in space.

“Shelby and I are very passionate about human spaceflight, so to see hardware that we helped build being handled by astronauts who will eventually transfer the experiments to ISS is exciting.”

The payloads are now being loaded in to the SpaceX Dragon spacecraft, the ninth mission in which the company – headed by entrepreneur Elon Musk – will be toting CU Boulder-built payloads to ISS since 2012. SpaceX’s Dragon will launch atop one of the company’s Falcon 9 rockets.

“We are looking forward to another successful mission and continuing our partnership with SpaceX, NASA and the Center for the Advancement of Science in Space,” said BioServe Director Louis Stodieck. “By providing a low-gravity environment, the ISS has been shown to be an effective testbed to better understand cellular changes, which can have significant implications for advancing biomedical research on Earth.” 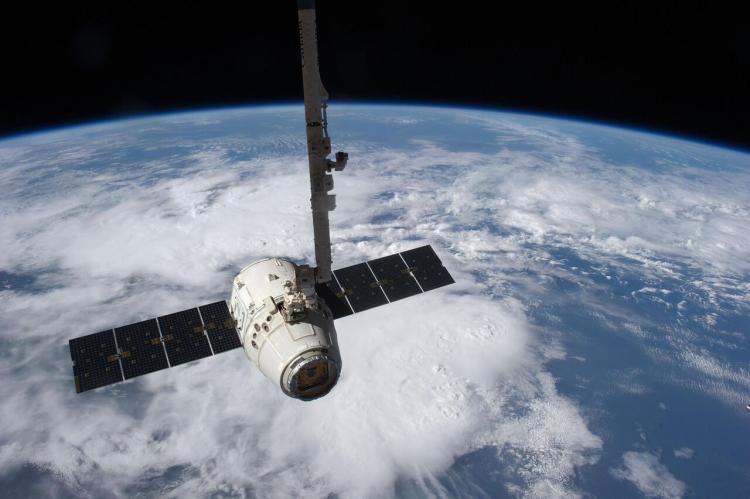 After she finished her undergraduate degree at Georgia Tech, Bottoms’ interest was perked when she saw CU Boulder had a bioastronautics program. Then she looked at the BioServe website. “I could see the people there were doing some really exciting things.’”

Both Bottoms and Lewis already have jobs in the aerospace industry locked up after they graduate this spring. Bottoms is going to work on human spaceflight issues for Lockheed Martin Space Systems in Littleton, Colorado. Lewis is going to work for Blue Origins, an aerospace research and development company founded by Amazon.com CEO Jeff Bezos in Kent, Washington, where he will be working on spacecraft and launch systems.

Headed by Dr. Anita Goel of Nanobiosym in Cambridge, Massachusetts, the first experiment will carry two strains of methicillin-resistant Staphylococcus aureus (MRSA) in hopes of better identifying and predicting bacterial mutations, said Stodieck. Understanding such mutations, which are believed to occur at a higher rate in near-weightlessness, could shed new light on how the deadly bacteria become drug-resistant.

The second experiment, led by Dr. Abba Zubiar of the Mayo College of Medicine in Jacksonville, Florida, involves growing stem cells in space for future use in medical therapies on Earth, said BioServe Associate Director Stefanie Countryman. Stem cells are extremely valuable in biomedicine – several million of them are required for use in a single human therapy treatment on Earth.

The space-grown stem cells will be returned from ISS to Earth in several months and will subsequently be used by researchers in clinical trials to test their efficacy in treating human diseases. Stem cells, used in regenerative medicine and tissue engineering, also have been used in treatments for stroke and cancer.

BioServe has had a permanent presence on ISS since 2002. Since its inception in 1987, BioServe has partnered with more than 100 companies. BioServe partners include large and small pharmaceutical and biotechnology companies, universities and NASA-funded researchers. Learn more about BioServe.

A new NASA report shows that the University of Colorado Boulder is the top university recipient of NASA astrophysics technology grants. END_OF_DOCUMENT_TOKEN_TO_BE_REPLACED

CU Boulder has been selected as a member of the United States Space Command Academic Engagement Enterprise, a new national program designed to expand collaboration and academic exchanges between universities and Space Command. END_OF_DOCUMENT_TOKEN_TO_BE_REPLACED

Since July 2022, a miniature satellite about the size of a shoebox has been orbiting Earth and monitoring how much solar energy reaches the atmosphere, one of the "most important" Earth science measurements. Now, scientists are finalizing their analysis of the first five months of the testing. END_OF_DOCUMENT_TOKEN_TO_BE_REPLACED
Return to the top of the page