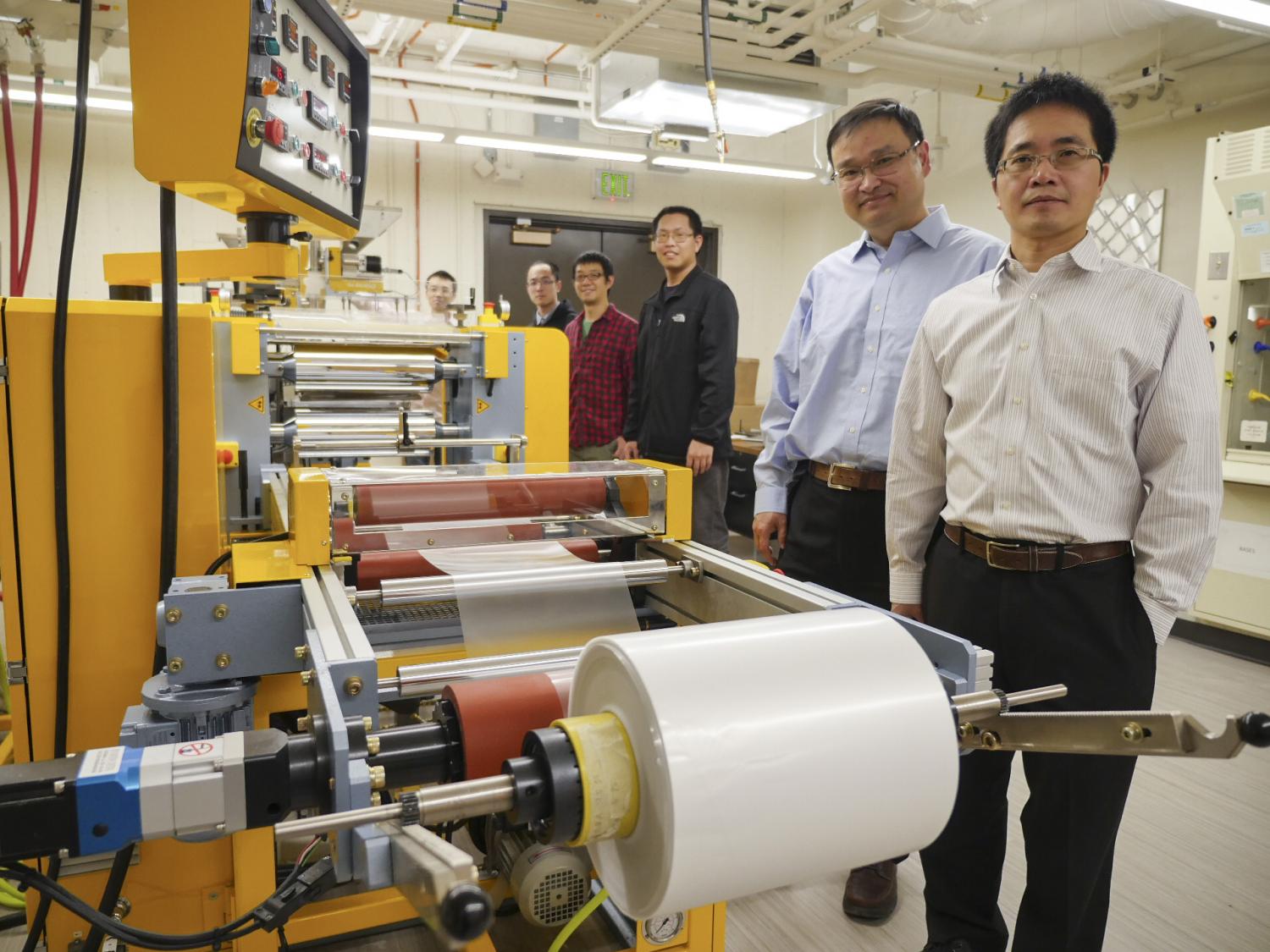 A team of CU Boulder engineers has developed a scalable manufactured metamaterial—an engineered material with extraordinary properties not found in nature—to act as a kind of air conditioning system for structures. It has the ability to cool objects even under direct sunlight with zero energy and water consumption.

When applied to a surface, the metamaterial film cools the object underneath by efficiently reflecting incoming solar energy back into space while simultaneously allowing the surface to shed its own heat in the form of infrared thermal radiation.

The new material, which is described today in the journal Science, could provide an eco-friendly means of supplementary cooling for thermoelectric power plants, which currently require large amounts of water and electricity to maintain the operating temperatures of their machinery.

The researchers’ glass-polymer hybrid material measures just 50 micrometers thick — slightly thicker than the aluminum foil found in a kitchen—and can be manufactured economically on rolls, making it a potentially viable large-scale technology for both residential and commercial applications.

“We feel that this low-cost manufacturing process will be transformative for real-world applications of this radiative cooling technology,” said Xiaobo Yin, co-director of the research and an assistant professor who holds dual appointments in CU Boulder’s Department of Mechanical Engineering and the Materials Science and Engineering Program. Yin received DARPA’s Young Faculty Award in 2015.

The material takes advantage of passive radiative cooling, the process by which objects naturally shed heat in the form of infrared radiation, without consuming energy. Thermal radiation provides some natural nighttime cooling and is used for residential cooling in some areas, but daytime cooling has historically been more of a challenge. For a structure exposed to sunlight, even a small amount of directly-absorbed solar energy is enough to negate passive radiation.

The challenge for the CU Boulder researchers, then, was to create a material that could provide a one-two punch: reflect any incoming solar rays back into the atmosphere while still providing a means of escape for infrared radiation. To solve this, the researchers embedded visibly-scattering but infrared-radiant glass microspheres into a polymer film. They then added a thin silver coating underneath in order to achieve maximum spectral reflectance.

“Both the glass-polymer metamaterial formation and the silver coating are manufactured at scale on roll-to-roll processes,” added Ronggui Yang, also a professor of mechanical engineering and a Fellow of the American Society of Mechanical Engineers.

“Just 10 to 20 square meters of this material on the rooftop could nicely cool down a single-family house in summer,” said Gang Tan, an associate professor in the University of Wyoming’s Department of Civil and Architectural Engineering and a co-author of the paper.

In addition to being useful for cooling of buildings and power plants, the material could also help improve the efficiency and lifetime of solar panels. In direct sunlight, panels can overheat to temperatures that hamper their ability to convert solar rays into electricity.

“Just by applying this material to the surface of a solar panel, we can cool the panel and recover an additional one to two percent of solar efficiency,” said Yin. “That makes a big difference at scale.”

The engineers have applied for a patent for the technology and are working with CU Boulder’s Technology Transfer Office to explore potential commercial applications. They plan to create a 200-square-meter “cooling farm” prototype in Boulder in 2017.

The invention is the result of a $3 million grant awarded in 2015 to Yang, Yin and Tang by the Energy Department’s Advanced Research Projects Agency-Energy (ARPA-E).

“The key advantage of this technology is that it works 24/7 with no electricity or water usage,” said Yang “We’re excited about the opportunity to explore potential uses in the power industry, aerospace, agriculture and more.”

Co-authors of the new research include Yao Zhai, Yaoguang Ma and Dongliang Zhao of CU Boulder’s Department of Mechanical Engineering; Sabrina David of CU’s Materials Science and Engineering Program; and Runnan Lou of the Ann and H.J. Smead Department of Aerospace Engineering Sciences.

What happens when an expert on natural language processing asks a chatbot to write a children's book in the style of Dr. Seuss? Professor Kai Larsen put the question to the test. END_OF_DOCUMENT_TOKEN_TO_BE_REPLACED

A model of your very own kidney made entirely from soft and pliable polymers? Researchers at two CU campuses are on the cusp of 3D printing realistic replicas of human anatomy. END_OF_DOCUMENT_TOKEN_TO_BE_REPLACED

For people who are blind or visually impaired, finding the right products in a crowded grocery store can be difficult without help. A team of computer scientists at CU Boulder is trying to change that. END_OF_DOCUMENT_TOKEN_TO_BE_REPLACED
Return to the top of the page