New evidence involving the ancient poop of some of the huge and astonishing creatures that once roamed Australia indicates the primary cause of their extinction around 45,000 years ago was likely a result of humans, not climate change.

Led by Monash University in Victoria, Australia and the University of Colorado Boulder, the team used information from a sediment core drilled in the Indian Ocean off the coast of southwest Australia to help reconstruct past climate and ecosystems on the continent. The core contains chronological layers of material blown and washed into the ocean, including dust, pollen, ash and spores from a fungus called Sporormiella that thrived on the dung of plant-eating mammals, said CU Boulder Professor Gifford Miller.

Miller, who participated in the study led by Sander van der Kaars of Monash University, said the sediment core allowed scientists to look back in time, in this case more than 150,000 years, spanning Earth’s last full glacial cycle. Fungal spores from plant-eating mammal dung were abundant in the sediment core layers from 150,000 years ago to about 45,000 years ago, when they went into a nosedive, said Miller, a professor in the Department of Geological Sciences.

“The abundance of these spores is good evidence for a lot of large mammals on the southwestern Australian landscape up until about 45,000 years ago,” he said. “Then, in a window of time lasting just a few thousand years, the megafauna population collapsed.”

A paper on the subject was published online Jan. 20 in Nature Communications.

The ocean sediment core showed the southwest is one of the few regions on the Australian continent that had dense forests both 45,000 years ago and today, making it a hotbed for biodiversity, said Miller, also associate director of CU Boulder’s Institute of Arctic and Alpine Research.

“It’s a region with some of the earliest evidence of humans on the continent, and where we would expect a lot of animals to have lived,” Miller said. “Because of the density of trees and shrubs, it could have been one of their last holdouts some 45,000 years ago. There is no evidence of significant climate change during the time of the megafauna extinction.”

Scientists have been debating the causes of the Australian megafauna extinctions for decades. Some claim the animals could not have survived changes in climate, including a shift some 70,000 years ago when much of the southwestern Australia landscape went from a wooded eucalyptus tree environment to an arid, sparsely vegetated landscape.

Others have suggested the animals were hunted to extinction by Australia’s earliest immigrants who had colonized most of the continent by 50,000 years ago, or a combination of overhunting and climate change, said Miller.

Miller said the extinction may have been caused by “imperceptible overkill.” A 2006 study by Australian researchers indicates that even low-intensity hunting of Australian megafauna – like the killing of one juvenile mammal per person per decade – could have resulted in the extinction of a species in just a few hundred years.

“The results of this study are of significant interest across the archaeological and Earth science communities and to the general public who remain fascinated by the menagerie of now extinct giant animals that roamed the planet – and the cause of their extinction – as our own species began its persistent colonization of Earth,” said van der Kaars.

In 2016 Miller used burned eggshells of the 400-pound bird, Genyornis, as the first direct evidence  that humans actually preyed on the Australian megafauna.

The new study also included Research Professor Scott Lehman of INSTAAR. The study was funded in part by the U.S. National Science Foundation and the German Research Foundation. 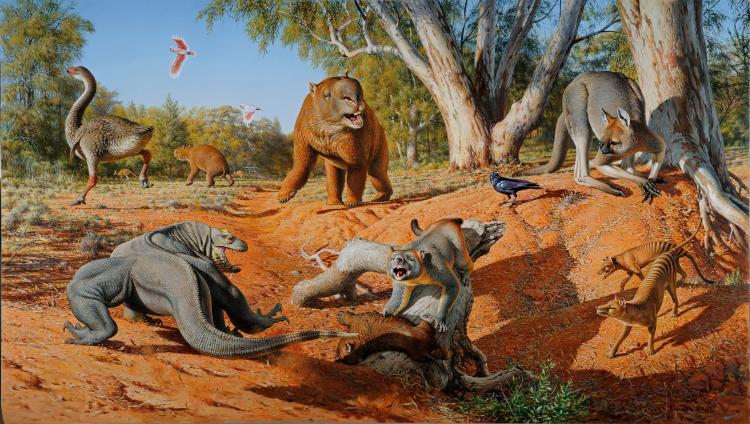 A new study involving the University of Monash and CU Boulder indicates humans were to blame for the extinction of the Australia megafauna some 45,000 years ago. Illustration by Peter Trusler / Monash University

CU Boulder neuroscientist Zoe Donaldson has found a new way to contribute to global science education. She and her team will spend much of August helping European high school students learn the finer points of gene manipulation in prairie voles. END_OF_DOCUMENT_TOKEN_TO_BE_REPLACED

Doctoral students Aaquib Tabrez and Matthew Luebbers, along with their advisor Bradley Hayes, used augmented reality Minesweeper to gain insight into a robot’s decision-making process. They were awarded runner-up for best student paper at an international conference. END_OF_DOCUMENT_TOKEN_TO_BE_REPLACED

With a project called Tinycade, graduate student Peter Gyory has set out to recreate that arcade parlor experience from childhood—entirely out of junk. END_OF_DOCUMENT_TOKEN_TO_BE_REPLACED
Return to the top of the page