Whether it’s a wide-receiver hauling in a pass, a runner sprinting the 1,500-meter, or a power forward taking the ball to the hole, athletes share one fundamental need as they strive for peak performance: They must have enough carbohydrates, a.k.a. sugar or “glycogen,” stored in their muscles to power them well. 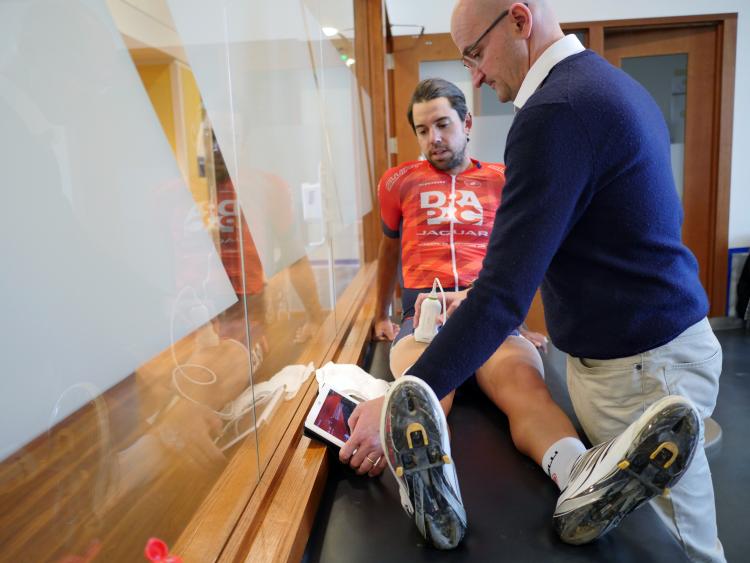 Until recently, the only way to scientifically gauge that level was via an impractical surgical biopsy. Non-scientifically, athletes knew they’d run out of fuel when they bonked mid-race or lacked the power to score.

But thanks to a new ultrasound technology developed by CU researchers and used by CU Boulder football, track and field, and basketball players, athletes can now painlessly measure their muscle glycogen levels in real-time in 15 seconds.

“We have basically developed a glycogen gas gauge,” explains Inigo San Millan, PhD, director of the Sports Performance Program at the CU Sports Medicine and Performance Center on the Boulder campus.

With the CU Buffs football players, San Millan would often test key athletes after practice and before they hit the weight room. If their arms lacked glycogen he might advise they focus on legs, or vice versa. He also used it post-game, to determine how long it took certain players to recover. “It has played an important role in dialing in the nutrition, training workload and recovery plans of our players and it’s been a big educational tool to help us establish protocols.”

San Millan, a former pro cyclist and an assistant professor in the  Department of Physical Medicine and Rehabilitation at the CU School of Medicine, began developing the technology in 2011 with colleague Dr. John Hill, a professor in the Department of Family Medicine. The two saw it as an indispensable tool for athletes, who lose power, fatigue faster and run the risk of injury when they train hard with low glycogen stores. They also saw it as a potential tool for helping Intensive Care Unit patients fend off cachexia, the tissue-wasting that often occurs post-trauma when muscles – starved of glucose – break down protein for fuel.

“Whether you are running a marathon or recovering from an accident, when the body runs out of glycogen the same thing happens: the muscle eats itself to feed itself,” explains San Millan.

The duo scientifically validated the methodology and licensed their patented technology to a Denver-based company called MuscleSound, and it has been used by an array of professional, Olympic and collegiate sports teams, including the Colorado Rapids, Colorado Rockies, Oregon State University and U.S.A. Cycling.

This year, MuscleSound rolled out a smart phone application with an ultrasound attachment for use by trainers in gyms. Military and medical applications are also in the works. 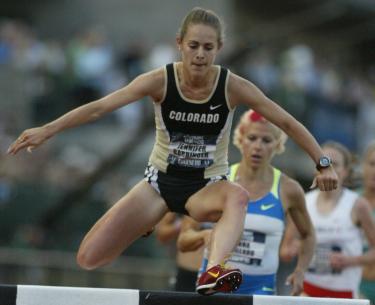 It works much like a fetal ultrasound. A coach or doctor runs a small hand-held wand over a muscle, emitting sound waves which bounce back in varying degrees based on how much water is present. (Carbohydrates soak up water so more water means more glycogen). On a nearby screen, an image appears with black showing glycogen-rich muscle while white indicates depletion. Then an algorithm spits out a Muscle Energy Status score. If it’s too low, the athlete may need to load up on carbs or lighten up on training. Glycogen depletion in a certain region may also be a sign of a brewing injury. If the score is too high, it may mean the athlete is training too little or eating too much and at risk of fat gain.Three-time Olympian and CU alumna Jenny Simpson, who took home the bronze medal in the women’s 1,500-meters in August, came to the center weekly during a tough stretch of training before Rio, for MuscleSound and other testing.

She said it gave her one more piece of information to fine-tune her training.

“The whole old-school idea that you just go out and push as hard as you can and rely solely on coaches’ observations to guide you is shifting,” she says. “This is a tool that is showing how coaching can work really harmoniously with science.”

Survivors of events like the recent Marshall Fire may face what sociologist Lori Peek called "the long tail of disaster-related trauma." She argues these survivors need mental health resources and support from friends and family long after the television cameras are gone. END_OF_DOCUMENT_TOKEN_TO_BE_REPLACED

A global study of 13,000 individuals found people around the world base their opinions of COVID-19 policies on who supports them, not what's in them. It suggests scientists and bipartisan coalitions, not political elites, should be the first ones to communicate pandemic plans. END_OF_DOCUMENT_TOKEN_TO_BE_REPLACED

As COVID-19’s omicron variant surges throughout many parts of the country and in Boulder County, researchers Kristen Bjorkman, Dan Larremore, Leslie Leinwand and Roy Parker are providing info to improve people’s awareness and safety. END_OF_DOCUMENT_TOKEN_TO_BE_REPLACED
Return to the top of the page