Studying the distant past in the Galápagos Islands

The Galápagos Islands are home to a tremendous diversity of plants and animals found nowhere else in the world. But why this is, and when it all began, remains something of an open question. Now scientists may have at least one more piece of the puzzle. According to a new study out today in the journal Earth and Planetary Science Letters, the geologic formation of one particular part of the archipelago--the part responsible for the huge biodiversity--formed, approximately 1.6 million years ago.

The lead author of the study is Cooperative Institute for Research in Environmental Sciences (CIRES) Fellow Kris Karnauskas, who you might say has a thing for these islands. He’s studied them extensively, authoring six peer-reviewed scientific papers with “Galápagos” in the title. But one question in particular kept nagging at him: When did the Galápagos become the Galápagos?

“I asked around and couldn’t get a straightforward answer,” says Karnauskas, who’s also an Assistant Professor in the Department of Atmospheric and Oceanic Sciences at the University of Colorado Boulder. “My geology friends said anywhere between half a million to twenty million years ago, depending on what feature we’re talking about.”

The age of one particular island, or even the whole chain, wasn’t quite what Karnauskas was looking for. “I wasn’t really interested in when the very first island breached the surface, but when this ecosystem developed,” he says. He wanted to put a finger on the geologic event or moment that turned the Galápagos from just another set of ordinary oceanic islands into one of the most biologically diverse spots in the world. “That’s not the customary way to ask questions in geology, nor does it lend itself to the usual toolbox.”

To start with the basics, the Galápagos sit on the Nazca tectonic plate, off the coast of South America. The plate is slowly moving from west to east (about 4 cm each year), and happens to be traveling over a hotspot, a point at which magma from the Earth’s core makes it all the way through the crust, forming volcanic islands. The oldest of the Galápagos islands, now eroded and no longer above water, is millions of years old; the youngest island, farther west, currently sits on top of the hotspot.

Karnauskas and his colleagues hypothesized that the critical event that caused a biological explosion in the Galápagos came about when the Equatorial Undercurrent (EUC) began colliding with the archipelago. The EUC is a current that, because of the laws of physics—the shape of the Earth and the way it spins—is virtually stuck to the equator. But what happens when something gets in the way?

“That’s what occurred with the Galápagos,” says Karnauskas. At some point, a large enough island (or possibly a cluster of them) rose high enough from the seafloor to block the current. Today, it’s the island of Isabela that serves that role. “It’s a pure accident of geography that Isla Isabela is so large and stands right on the equator, right where the EUC is trying to pass through. This is enough to drive cold, nutrient-rich water up to the surface where it can fuel marine productivity. We can easily see it today from space; the water is very cold and productive just west of the Galápagos along the shores of Isabela. It’s no surprise that you’ll find all the penguins jumping in the water there.”

Finding out exactly when the Galápagos blocked the EUC required help from some the paleoceanography community. Karnauskas and his colleagues used previously collected data from sediment cores—deep samples of the sea floor—that had been pulled up from sample sites near the Galápagos Islands and South America. The data files, which are hosted by NOAA Boulder's National Centers for Environmental Information, provided information on changes in sea surface temperatures over millions of years.

Lo and behold, approximately 1.6 million years ago, they saw shifts in the chemical composition of the fossil bugs in the sediment suggesting a significant change in those temperatures. Cold water that had once been upwelling off the coast of South America was suddenly upwelling along the western shores of the Galápagos instead. That sounded familiar to Karnauskas and coauthors; they knew from their own model experiments conducted over the past decade that this was the fingerprint of the Galápagos blocking the EUC. Coauthor Eric Mittelstaedt, Assistant Professor of Geological Sciences at the University of Idaho, then developed a new computer model of the archipelago’s geologic evolution; by combining that model with Karnauskas’ ocean circulation model, the team was able to independently corroborate the timing.

At that moment in time (geologically speaking, of course), the Galápagos ecosystem was forever changed. Since the EUC could no longer keep going straight toward the mainland, some of it rushed upward, carrying with it those cold, nutrient-rich waters to the surface, and creating conditions in which the fish, plants and penguins that now call the island chain home could thrive.

“Typically, we use known geologic constraints to help explain past changes in the environment such as ocean circulation,” says Karnauskas. “In this case, we flipped the problem on it’s head, combined models that aren’t normally combined, and discovered a new constraint for piecing together the bigger picture of the evolution of, and on, the islands over time. It contributes a unique data point not only for geology but also for ecology and biogeography—where and when life is distributed.” 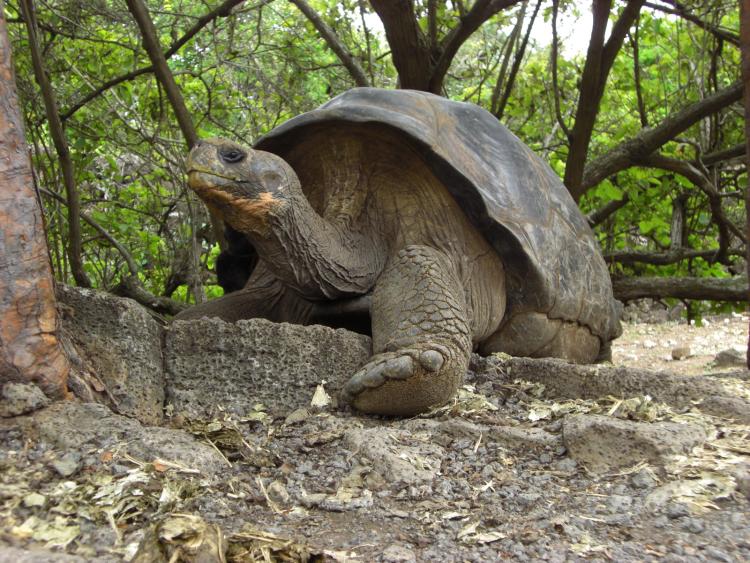 CU Boulder neuroscientist Zoe Donaldson has found a new way to contribute to global science education. She and her team will spend much of August helping European high school students learn the finer points of gene manipulation in prairie voles. END_OF_DOCUMENT_TOKEN_TO_BE_REPLACED

Doctoral students Aaquib Tabrez and Matthew Luebbers, along with their advisor Bradley Hayes, used augmented reality Minesweeper to gain insight into a robot’s decision-making process. They were awarded runner-up for best student paper at an international conference. END_OF_DOCUMENT_TOKEN_TO_BE_REPLACED

With a project called Tinycade, graduate student Peter Gyory has set out to recreate that arcade parlor experience from childhood—entirely out of junk. END_OF_DOCUMENT_TOKEN_TO_BE_REPLACED
Return to the top of the page