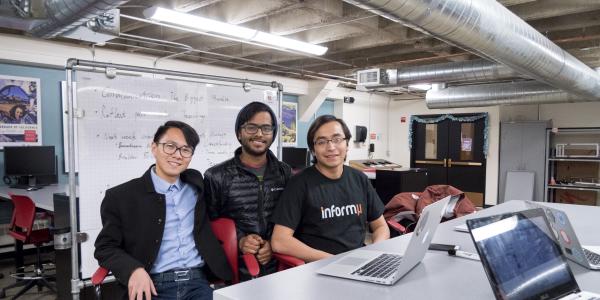 For anyone who has lost a backpack or purse, Lang Mei feels your pain. After a thief stole his backpack from a coffee shop in Paris last year, the business administration senior began thinking about how to prevent that from happening again.

Mei had placed his bag on the floor next to the table leg. The next time he looked down, his bag was missing. Gone were his laptop, money, passport and school papers. Mei, who spoke little French, had a frustrating conversation with a French policeman who couldn’t speak English. Mei never got his bag or belongings back.

From that experience, informµ was born.

"Informµ is the simplest way to keeping belongings safe," said Mei, who is majoring in information management with a certificate in entrepreneurship at the Leeds School of Business. "Informµ is revolutionizing how we keep track of our most important things. By utilizing IoT technology, informµ eliminates the stress, expense and wasted time associated with losing your valuables."

The Internet of Things (IoT) is a system of interrelated computing devices that can transfer data over a network.

After returning to CU Boulder, Mei began working on a small tracking tag that could be attached to any item. Mei collaborated with Rishabh Berlia, an electrical and electronics engineering major who had a similar experience when he lost his backpack containing not just his end-of-semester lab report, but two of his friend’s lab reports. The two became informµ co-creators.

Mµ tag uses Bluetooth technology and an app to track belongings quickly. A tag smaller than a quarter links to a smart phone or a wearable device like an Apple Watch. When people move away from their belongings, with an adjustable range up to 100 feet, a notification pops up on their phones or devices and a map shows the location their property.

For example, if you are at a restaurant and are about to leave without your wallet, the quick notification function will notify you on your phone or wearable device right away. It informs you that you’re out of range of your belongings.

Mei and Berlia prepared for their project by participating in Catalyze CU, an eight-week summer startup accelerator designed for CU students, alumni and faculty. Catalyze CU combines mentorship and equity-free grants to help the most promising ideas and technologies succeed.

After gathering a team to work on the innovative tracking device, informµ was founded in September 2015 and officially registered in Colorado in 2016. Team members include Prayash Thapa, computer science, and Raza Qazi, PhD, electrical, computer and energy engineering.

Crowdfunding the next prototype

The informµ team developed a device that can help people keep track of their important items. They are trying to crowdfund the creation of their next prototype and to help move the project forward. Prototypes will be distributed within the community once they have the money to purchase enough components. Find out more by reading the informµ crowdfunding page.