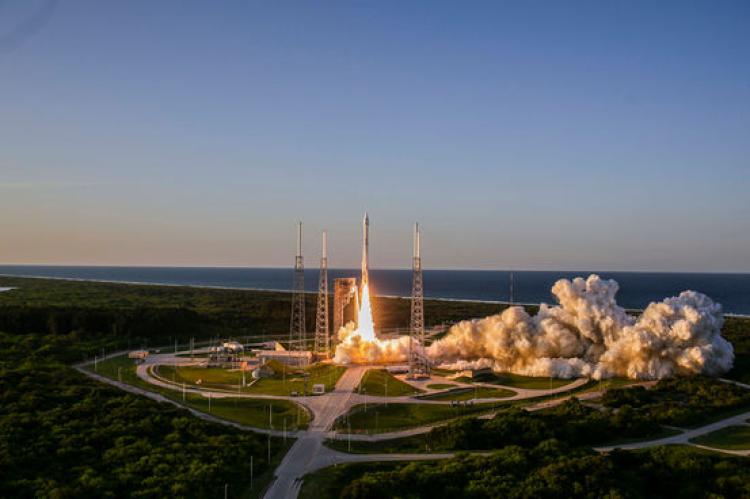 A NASA mission involving CU Boulder was successfully launched from Cape Canaveral, Florida, at 5:05 p.m. MDT last night and is on its way to explore an asteroid, setting the stage for a better understanding of the evolution of our solar system.

The destination of the OSIRIS-REx spacecraft, a near-Earth asteroid named Bennu, is thought to harbor primordial material left over from the formation of the solar system 4.5 billion years ago. CU Boulder Distinguished Professor Daniel Scheeres of the Department of Aerospace Engineering Sciences is the OSIRIS-REx team leader for the mission’s radio science group, which will use spacecraft tracking data to probe Bennu.

“Seeing the launch with the whole OSIRIS-REx team was an inspiring and motivating experience,” says Scheeres. “We are eager to get to Bennu and carry out our investigations and sample collection. We are confident that what we find will revolutionize asteroid science and help us better understand the formation and evolution of the solar system.”

The spacecraft was designed and built by Lockheed Martin Space Systems of Littleton, Colorado and launched aboard an Atlas V rocket built by United Launch Alliance of Centennial, Colorado.

Initial spacecraft data indicate it is healthy and on its proper trajectory, according to Lockheed Martin officials. The spacecraft autonomously deployed its two solar arrays and turned on the telecommunications radio roughly an hour after last night’s launch.

The spacecraft will take two years to reach Bennu and spend the next two years gathering data before it plucks a sample of rocks and surface soil from the asteroid using a robotic arm. The researchers hope to collect up to 4 pounds of material from the asteroid’s surface, which will be launched back to Earth in a small capsule, arriving in 2023.

Other CU Boulder researchers involved in the mission include Assistant Professor Jay McMahon, Senior Research Associate Paul Sanchez, postdoctoral researcher Siamak Hesar and graduate students Daniel Brack and Samantha Rieger. CU Boulder is expected to receive about $3 million from NASA over the course of the mission.

Bennu is believed to be a rubble pile of primitive boulders, rocks and gravel as well as organic compounds like amino acids that are rich in carbon, Scheeres says. Scientists believe such compounds may have contributed to the evolution of life on Earth and are important factors in determining the potential for life elsewhere in the solar system.

One motivation to visit Bennu is the small chance it could smack Earth in the coming centuries, explains Scheeres. As a near-Earth asteroid, Bennu will cross Earth’s orbit in about 160 years. Data gathered from the mission should help scientists better predict where Bennu will be in the next few hundred years.

When SpaceX CRS-23 launched to the International Space Station on Aug. 29, it carried with it a milestone for CU Boulder: the 80th mission to carry a payload from BioServe Space Technologies. END_OF_DOCUMENT_TOKEN_TO_BE_REPLACED

From diving Neanderthals to saliva-based COVID-19 tests, we remember the year in research at CU Boulder. END_OF_DOCUMENT_TOKEN_TO_BE_REPLACED

Astronaut ice cream—the crunchy, freeze-dried, pale imitation of the real thing—may have met its match: The International Space Station is getting a real freezer. END_OF_DOCUMENT_TOKEN_TO_BE_REPLACED
Return to the top of the page