Camp Century, a U.S. military base built within the Greenland Ice Sheet in 1959, doubled as a top-secret site for testing the feasibility of deploying nuclear missiles from the Arctic during the Cold War. When the camp was decommissioned in 1967, its infrastructure and waste were abandoned under the assumption they would be entombed forever by perpetual snowfall.

But climate change has warmed the Arctic more than any other region on Earth, and a new study finds the portion of the ice sheet covering Camp Century could start to melt by the end of the century. If the ice melts, the camp’s infrastructure, as well as any remaining biological, chemical and radioactive waste, could re-enter the environment and potentially disrupt nearby ecosystems, according to the study’s authors.

Determining who is responsible for cleaning up the waste could also lead to political disputes not considered before, according to the study’s authors.

“Two generations ago, people were interring waste in different areas of the world, and now climate change is modifying those sites,” said William Colgan, a climate and glacier scientist at York University in Toronto, Canada, and lead author of the new study. “It’s a new breed of political challenge we have to think about.”

The new study was published today in Geophysical Research Letters, a journal of the American Geophysical Union.

The assumption that any waste could be buried forever under ice is unrealistic, according to James White, a climate scientist at the University of Colorado in Boulder, who was not connected to the study.

A “city under the ice”

During the Cold War, U.S. military attention shifted to the Arctic — the shortest route between the U.S. and the former Soviet Union. In April 1951, the U.S. and Denmark agreed to defend Greenland, a Danish territory, from Soviet attack, and the U.S. built several air bases in Greenland that year.

In 1959, the U.S. Army Corps of Engineers built Camp Century 200 kilometers (125 miles) inland from the Greenland coast. Encased completely within the ice sheet, Camp Century became known as the “city under the ice.”

The camp’s official purpose was to test construction techniques in the Arctic and conduct scientific research. While in operation, the camp housed 85 to 200 soldiers and was powered by a nuclear reactor. Scientists at Camp Century took ice core samples providing climate data still cited in research today, Colgan said.

The camp also provided proof of concept for a top secret program to test the feasibility of building nuclear missile launch sites close enough to reach the Soviet Union. While never built, a larger planned camp based on the concept of Camp Century would have housed a 4,000-kilometer (2,500-mile) long tunnel system underneath the ice, capable of deploying up to 600 nuclear missiles.

Although the camp was built with Denmark’s approval, the missile launch program, known as Project Iceworm, was kept secret from the Danish government. Several years after the camp became operational, Project Iceworm was rejected by the Joint Chiefs of Staff and the camp was decommissioned. The Army Corps of Engineers removed the nuclear reaction chamber but left the camp’s infrastructure and all other waste behind, assuming the ice sheet would secure them forever. In the decades since, fallin

Waste beneath the ice

In the new study, Colgan and his team took an inventory of the wastes at Camp Century and ran climate model simulations to determine whether the waste will stay put in a warming Arctic. The team analyzed historical U.S. army engineering documents to determine where and how deep the wastes were buried and how much the ice cap had moved since the 1950s.

“Looking at the data, we can see right where it’s buried,” says Mike MacFerrin, a CIRES researcher who is co-author on the paper.  MacFerrin analyzed ground-penetrating radar from NASA’s Operation IceBridge aircraft to pinpoint the camp’s current location and depth.  “The radar shows smooth layers of snow and ice until reaching the camp.  Then the signal gets messy.  We don’t yet have enough detail to map exactly what all is down there, but the outline is clear.”

The team found the waste at Camp Century covers 55 hectares (136 acres), roughly the size of 100 football fields. They estimate the site contains 200,000 liters (53,000 gallons) of diesel fuel, enough for a car to circle the globe 80 times. Based on building materials used in the Arctic at the time, the authors speculate the site contains polychlorinated biphenyls (PCBs), pollutants toxic to human health. They also estimate the site has 240,000 liters (63,000 gallons) of waste water, including sewage, along with radioactive coolant from the nuclear generator.

Looking at existing business-as-usual climate projections, the team determined the wastes would not remain encased in ice forever, as was assumed by both the U.S. and Denmark when the camp was abandoned. Instead, they could melt and re-enter the environment.

Camp Century’s waste presents a significant environmental hazard, according to the study’s authors. When the ice melts, pollutants could be transported to the ocean, where they could disrupt marine ecosystems, Colgan said.

Based on ice sheet observations near Camp Century but at lower elevations, the camp’s waste could be exposed sooner than the study’s models predict, said Jennifer Mercer, a cryospheric scientist with the National Science Foundation who specializes in operations on the Greenland Ice Sheet and who was not connected to the study.

The study does not advocate for starting remediation activities at Camp Century now. The waste is buried tens of meters below the ice, and any cleanup activities would be costly and technically challenging, Colgan said.

“It really becomes a situation of waiting until the ice sheet has melted down to almost expose the wastes that anyone should advocate for site remediation,” he said.

But the new study does raise questions about who is responsible for cleaning up the waste when it is exposed. International law is clear about responsibility for preventing future hazardous waste, but ambiguous about who is liable for waste already discarded, said Jessica Green, a political scientist specializing in international environmental law at New York University who was not connected to the study. Although Camp Century was a U.S. base, it is on Danish soil, and although Greenland is a Danish territory, it is now self-governing, she said.

The implications of climate change on politically ambiguous abandoned wastes have not been considered before, according to the study’s authors.

“The study identifies a big hole in the extant set of laws and rules we have to deal with environmental problems globally,” Green said. 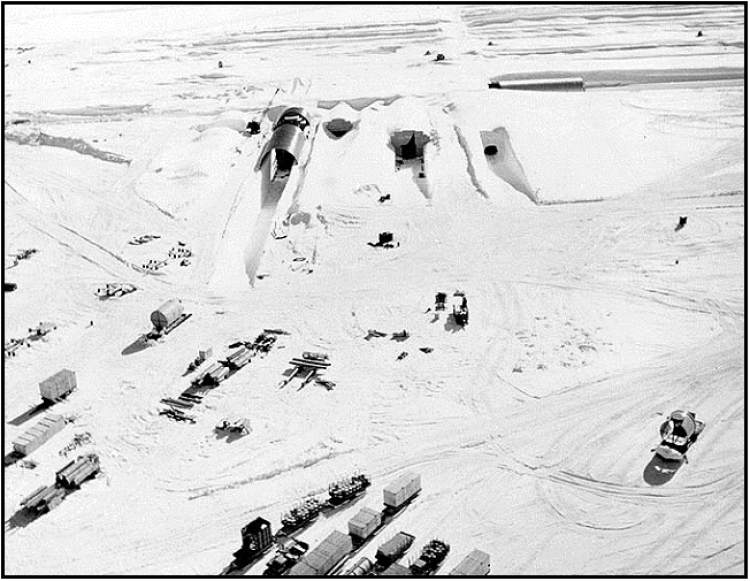 A Department of Energy award will help accelerate research into flow batteries, which will help make the electricity grid more reliable and sustainable. END_OF_DOCUMENT_TOKEN_TO_BE_REPLACED

CIRES fellow and Associate Professor Jennifer Kay discusses the influence of Syukuro “Suki” Manabe, who this week was named a Nobel Prize laureate in physics. END_OF_DOCUMENT_TOKEN_TO_BE_REPLACED
Return to the top of the page