The dark side of painkillers – their dramatic increase in use and ability to trigger abuse, addiction and thousands of fatal overdoses annually in the United States - is in the news virtually every day.

Brace for another shot across the bow: Opioids like morphine have now been shown to paradoxically cause an increase in chronic pain in lab rats, findings that could have far-reaching implications for humans, says a new study led by the University of Colorado Boulder.

Led by CU-Boulder Assistant Research Professor Peter Grace and Distinguished Professor Linda Watkins, the study showed that just a few days of morphine treatment caused chronic pain that went on for several months by exacerbating the release of pain signals from specific immune cells in the spinal cord.  The results suggest that the recent escalation of opioid prescriptions in humans may be a contributor to chronic pain, said Grace.

“We are showing for the first time that even a brief exposure to opioids can have long-term negative effects on pain,” said Grace, who is a faculty member along with Watkins in CU-Boulder’s Department of Psychology and Neuroscience. “We found the treatment was contributing to the problem.”

A paper on the study was published May 30 in the Proceedings of the National Academy of Sciences.

The study showed that a peripheral nerve injury in rats sends a message from damaged nerve cells to spinal cord immune cells known as glial cells, which normally act as “housekeepers” to clear out unwanted debris and microorganisms. The first signal of pain sends glial cells into an alert mode, priming them for further action.

“I look at it like turning up a dimmer switch on the spinal cord,” said Grace.

When the injury was treated with just five days of opioids the glial cells went into overdrive, triggering a cascade of actions, including spinal cord inflammation. Watkins said the initial pain signals to the spinal cord and the subsequent morphine-induced treatment is a two-hit process, which she likened to slapping a person’s face.

“You might get away with the first slap, but not the second,” she said. “This one-two hit causes the glial cells to explode into action, making pain neurons go wild.”

The team discovered that the pain signals from a peripheral injury combined with subsequent morphine treatment worked together to cause a glial cell signaling cascade. The cascade produces a cell signal from a protein called interleukin-1beta (IL-1b), which increases the activity of pain-responsive nerve cells in the spinal cord and brain. That can cause increases in pain duration lasting several months.

“The implications for people taking opioids like morphine, oxycodone and methadone are great, since we show the short-term decision to take such opioids can have devastating consequences of making pain worse and longer lasting,” said Watkins. “This is a very ugly side to opioids that had not been recognized before.”

Roughly 20,000 Americans died in 2015 from overdoses of prescription opioid pain relievers, according to the National Institute on Drug Abuse.

On the up side, the researchers have found ways to block specific receptors on glial cells that recognize opioids. This could allow for some pain relief while potentially preventing chronic pain. The team used a designer drug technology known as DREADD to selectively turn off targeted glial cells, something that has not been done before, said Grace. 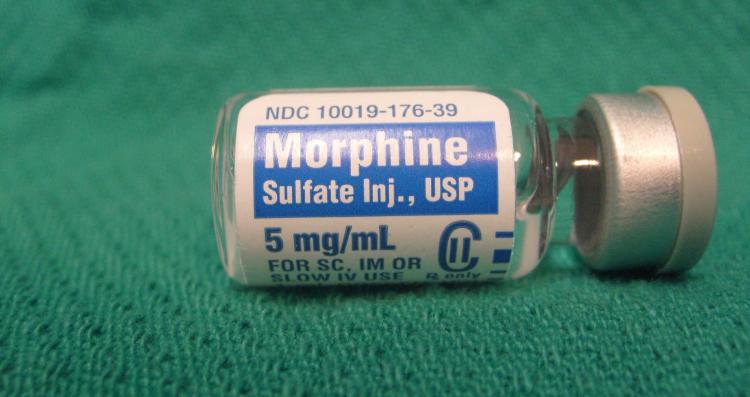 A vial of morphine for injection. Photo: Vaprotan / Wikipedia

Seventy-eight years ago on Jan. 27, the Auschwitz concentration camp closed after liberation by the Soviet army. Professor Janet Jacobs, who researches genocide, trauma and collective memory, discusses the ways in which the experiences and trauma of Holocaust survivors are passed down through generations. END_OF_DOCUMENT_TOKEN_TO_BE_REPLACED

A model of your very own kidney made entirely from soft and pliable polymers? Researchers at two CU campuses are on the cusp of 3D printing realistic replicas of human anatomy. END_OF_DOCUMENT_TOKEN_TO_BE_REPLACED

Legalizing recreational cannabis does not increase substance use disorders or use of other illicit drugs in adults and may reduce alcohol-related problems, according to new research. The study also found no link between cannabis legalization and increases in cognitive, psychological, social, relationship or financial problems. END_OF_DOCUMENT_TOKEN_TO_BE_REPLACED
Return to the top of the page