Researchers at the University of Colorado Boulder, in collaboration with the University of California, Berkeley and the Massachusetts Institute of Technology (MIT), have developed a groundbreaking microprocessor chip that uses light, rather than electricity, to transfer data at rapid speeds while consuming minute amounts of energy.

Details of the new technology, which could pave the way for faster, more powerful computing systems and network infrastructure, were published today in the journal Nature.

“Light based integrated circuits could lead to radical changes in computing and network chip architecture in applications ranging from smartphones to supercomputers to large data centers, something computer architects have already begun work on in anticipation of the arrival of this technology,” said Miloš Popović, an assistant professor in CU-Boulder’s Department of Electrical, Computer, and Energy Engineering and a co-corresponding author of the study.

Traditional microprocessor chips—the ones found in everything from laptops to supercomputers—use electrical circuits to communicate with one another and transfer information.  In recent years, however, the sheer amount of electricity needed to power the ever-increasing speed and volume of these data transfers has proven to be a limiting factor.

To overcome this obstacle, the researchers turned to photonics, or light-based, technology.  Sending information using light rather than electricity reduces a microchip’s energy burden because light can be sent across longer distances using the same amount of power.

“One advantage of light based communication is that multiple parallel data streams encoded on different colors of light can be sent over one and the same medium – in this case, an optical wire waveguide on a chip, or an off-chip optical fiber of the same kind that as those that form the Internet backbone,” said Popović, whose CU-Boulder-based team developed the photonic device technology in collaboration with a team led by Rajeev Ram, a professor of electrical engineering at MIT.

“Another advantage is that the infrared light that we use – and that also TV remotes use – has a physical wavelength shorter than 1 micron, about one hundredth of the thickness of a human hair," said Popović. "This enables very dense packing of light communication ports on a chip, enabling huge total bandwidth.”

The new chip has a bandwidth density of 300 gigabits per second per square millimeter, about 10 to 50 times greater than packaged electrical-only microprocessors currently on the market.

Measuring just 3 millimeters by 6 millimeters, the chip bridges the gap between current high-speed electronics manufacturing and the needs of next-generation computing for chips with large-scale integrated light circuits.  It retains state-of-the-art traditional electronic circuitry while incorporating 850 optical input/output (I/O) components in order to create the first integrated, single-chip design of its kind.

"This is a milestone. It's the first processor that can use light to communicate with the external world," said Vladimir Stojanović, an associate professor of electrical engineering and computer sciences at the University of California, Berkeley who led the collaborative team in this research. "No other processor has photonic I/O in the chip."

By combining the optical circuitry and electronic circuitry on a single chip, the researchers anticipate that the new technology can be integrated into current manufacturing processes smoothly and scaled up for commercial production with minimal disruption.

"We figured out how to reuse the same materials and processing steps that comprise the electrical circuits to build high-performance optical devices in the same chip," said Mark Wade, a Ph.D. candidate at CU-Boulder and a co-lead author of the study. "This allows us to design complex electronic-photonic systems that can solve the communication bottleneck in computing."

The research has resulted in two startups, including Ayar Labs which specializes in energy-efficient, high-volume data transfers.  The company was founded by researchers from CU-Boulder, the University of California, Berkeley, and MIT.  Under its former name of OptiBit, Ayar Labs won the Department of Energy-sponsored MIT Clean Energy Prize earlier this year. 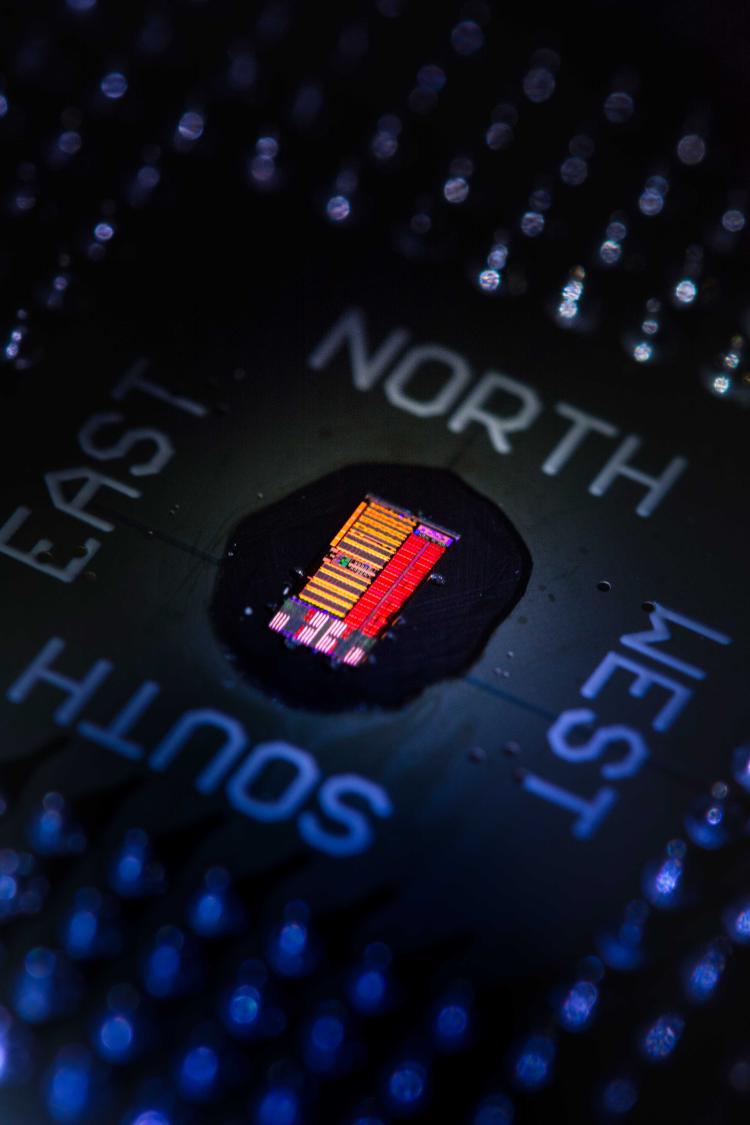 The light-enabled microprocessor, a 3 x 6 millimeter chip, installed on a circuit board. Photo by Glenn Asakawa. 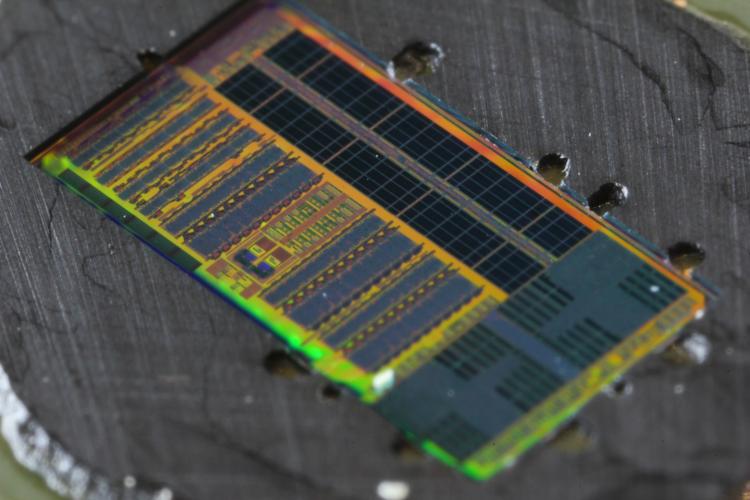 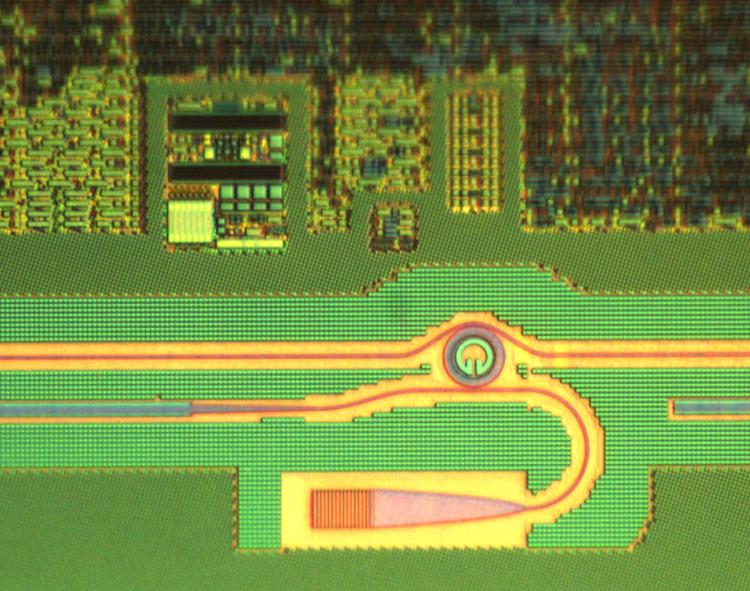 Electrical signals are encoded on light waves in this optical transmitter consisting of a spoked ring modulator, monitoring photodiode (left) and light access port (bottom), all built using the same manufacturing steps and alongside transistor circuits that control them (top). Photo by Mark Wade.

“Light based integrated circuits could lead to radical changes in computing and network chip architecture in applications ranging from smartphones to supercomputers to large data centers, something computer architects have already begun work on in anticipation of the arrival of this technology,” said Miloš Popović, an assistant professor in CU-Boulder’s Department of Electrical, Computer, and Energy Engineering and a co-corresponding author of the study.
Categories:

The Living Materials Laboratory is scaling up the manufacture of carbon-neutral cement as well as cement products, which can slowly pull carbon dioxide out of the atmosphere and store it. END_OF_DOCUMENT_TOKEN_TO_BE_REPLACED

Qubits, the basic building blocks of quantum computers, are as fragile as snowflakes. Now, researchers have come up with a new way of reading out the information from certain kinds of qubits with a light touch, potentially paving the way for a quantum internet. END_OF_DOCUMENT_TOKEN_TO_BE_REPLACED

New results from real-world tests of a downwind turbine could inform and improve the wind energy industry in a world with intensifying hurricanes and a greater demand for renewable energy. END_OF_DOCUMENT_TOKEN_TO_BE_REPLACED
Return to the top of the page