When he was in high school, Daniel Pette was fascinated by stars. When his earth science teacher told him that massive stars die out faster than smaller ones, Pette diagrammed a theory to figure out why this was. When he discovered that his findings were correct, Pette became determined to pursue a career in astrophysics. Now in his second year of graduate school as an aerospace engineering student, Pette studies space weather and trade space.

"I realized I wanted to do something more hands on and more applied," Pette said. "So I moved toward engineering."

Also a teaching assistant for Principles of Climate, Pette has a passion for teaching others and believes that math and science can be learned by everyone.

"I like to show people that math and physics aren’t just some abstract things for nerdy people," Pette said. "Everybody is capable of learning it, and it has a strong impact on all of our lives."

As part of CU-Boulder’s Our Space. Our Future. month of events, student-led Space Pod presentations shed light on innovation in aerospace and technology research on campus. In an effort to educate and inspire the public, these displays help facilitate an understanding of the issues the world faces and possible solutions through innovation.

"Through these Space Pods, we can educate the public not only about space research but also how it impacts their lives," said Pette.

Pette’s project focuses on asteroid mining and the implications it has for the future. With his co-leader, Kevin Dimond, Pette built a magnetic separator using lasers and 3D printing, which helps demonstrate the concept of asteroid mining.

Pette came to Boulder from Lynbrook, New York for the research opportunities at CU-Boulder. He demonstrates the entire process of asteroid mining, including why it is important for Earth’s environment, the science behind identifying asteroids and the physics used to reach asteroids. Pette’s presentations are on Mondays, Wednesdays and Fridays at 1 p.m. in the Norlin Library Commons.

"We don't just give a superficial explanation of asteroid mining, we go through the entire process," Pette said. "We have this chronological poster design where if someone wants to come and learn, they can learn a lot and gain an appreciation for how much goes into some outer space endeavors."

Justin Chin is another graduate student whose Space Pod project illustrates the possibilities that wearable technology has for the future. Also from New York, Chin came to CU-Boulder for its architectural engineering program. His project focuses on how to optimize personal comfort through clothing that can adapt to heat or cool one’s body temperature automatically.

"The whole idea is that everyone has different preferences, and having one room temperature can never satisfy everyone in a space," Chin said.

Chin’s project in wearable technology seeks to provide an alternative to the current NASA space suit heating and cooling system, which is not automated and can be distracting for astronauts as they have to control the system themselves.

"The conventional spacesuits rely on water that fills a tube circulating around the body and you can cool down the body by increasing the flow of the water," Chin said. "This is done manually and would be more efficient if it were controlled automatically."

Instead of pushing an on and off button, Chin has designed his project to respond to rubbing and fanning movements of the clothing and to recognize a person’s temperature preference from these movement patterns.

"It’s making a platform to gather the information on my preferences," Chin said. "A machine can then learn my preferences and can react by heating or cooling automatically."

These projects are part of the universitywide Grand Challenge, which focuses on encouraging discussion and research around problems that face the world, such as a changing environment, increasing populations and limited resources.

For Pette, mining asteroids is a way to decrease the amount of resources taken from Earth.

"Instead of mining the Earth, we can instead mine asteroids since they’re so metal rich," Pette said. "Platinum is expensive and rare; the amount on an asteroid is huge compared to what is found on Earth."

Pette believes everyone can contribute to innovation in researching solutions to the problems the world faces. He hopes that the Space Pods help people to look past "fancy research" and recognize that these technologies are the future.

"This is what we’ll be seeing decades from now," Pette said. "All these space pods have implications on research and on the public’s individual lives."

For decades, CU-Boulder has been a leader in the earth and space sciences and strives to maintain its leadership in the coming decades. The universitywide Grand Challenge seeks to build on the strengths of the university’s innovative research in aerospace and technology in order to provide solutions to serious issues. Space Month celebrations will continue through Oct. 17.

CU-Boulder's Penina Axelrad , professor and chair of the Department of Aerospace Sciences, received the 2015 Aerospace Educator Award from the Women in Aerospace association. END_OF_DOCUMENT_TOKEN_TO_BE_REPLACED

It’s August and that means the hottest show in the night sky -- the Perseid meteor shower -- will make its annual appearance, peaking in the pre-dawn hours of Aug. 11 to 14. END_OF_DOCUMENT_TOKEN_TO_BE_REPLACED 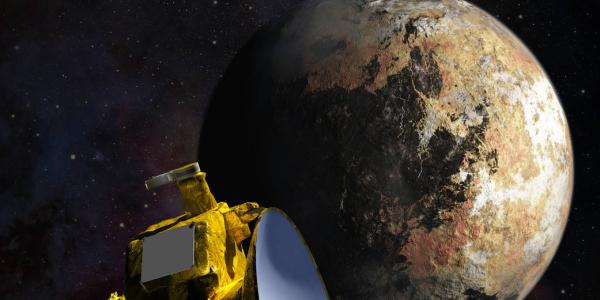 After a nine-year journey of 3 billion miles, a piano-sized, power-packed NASA spacecraft has an upcoming date with history that some University of Colorado Boulder students, faculty and alumni wouldn’t miss for the world. END_OF_DOCUMENT_TOKEN_TO_BE_REPLACED
Return to the top of the page